Here’s a great collection of Muhammad Ali quotes that show us why he rightfully deserves to be called one of the greatest boxers of all time.

Muhammad Ali, the three-time World Heavyweight Champion, is regarded as one of the greatest boxers in history. His professional record is unrivaled, with 56 wins and five losses.

After his retirement, he traveled the world as a peace ambassador and championed social concerns such as eradicating poverty and discrimination.

Muhammad Ali, the Greatest of All Time (GOAT), sadly passed away on June 3, 2016. In recognition of his motivating character, below are some quotes to remind us why he’s the GOAT.

Inspiration is something that we all need in life. Why? Because inspiration gives us the energy to do great things, achieve big goals, and make our dreams come true.

Muhammad Ali was and will be an inspiration to millions of people. The following Muhammad Ali quotes motivate us to stop procrastinating and take action to do something meaningful.

“The man who has no imagination has no wings.”

“I am the greatest, I said that even before I knew I was.”

“He who is not courageous enough to take risks will accomplish nothing in life.”

“Float like a butterfly, sting like a bee. His hands can’t hit what his eyes can’t see.”

“If my mind can conceive it, and my heart can believe it—then I can achieve it.”

This was first said by Jesse Jackson in 1983 (as reported by the Associated Press), and Ali cited it in his book published in 2004.

“If they can make penicillin out of moldy bread, they can sure make something out of you.”

“Live everyday as if it were your last because someday you’re going to be right.”

“It isn’t the mountains ahead to climb that wear you out; it’s the pebble in your shoe.”

“I’ve wrestled with alligators. I’ve tussled with a whale. I done handcuffed lightning. And throw thunder in jail.”

Muhammad Ali devoted his post-retirement years to humanitarianism and philanthropy, which led him all over the world on different UN goodwill missions.

He showed us how to be successful in life through his own positive attitude.

Below are quotes from Muhammad Ali that reflect his positivity toward life and motivate us to stay positive in life.

“The will must be stronger than the skill.”

“Service to others is the rent you pay for your room here on earth.”

“Braggin’ is when a person says something and can’t do it. I do what I say.”

“Hating people because of their color is wrong. And it doesn’t matter which color does the hating. It’s just plain wrong.”

“It’s the repetition of affirmations that leads to belief. And once that belief becomes a deep conviction, things begin to happen.”

“Age is whatever you think it is. You are as old as you think you are.”

“The fight is won or lost far away from witnesses – behind the lines, in the gym, and out there on the road, long before I dance under those lights.”

Muhammad Ali never held back when answering questions or being challenged by interviewers. His honesty, the fact that he stood for something greater than boxing, his openness and sense of humor, and with his ring achievements make him one of the greatest.

If you feel losing your morale in achieving your goals at any stage in your life, some of these quotes from Muhammad Ali will be sure to elevate get back in the game

“It’s not bragging if you can back it up.”

“If you even dream of beating me you’d better wake up and apologize.”

“I hated every minute of training, but I said, ‘Don’t quit. Suffer now and live the rest of your life as a champion.”

“Silence is golden when you can’t think of a good answer.” 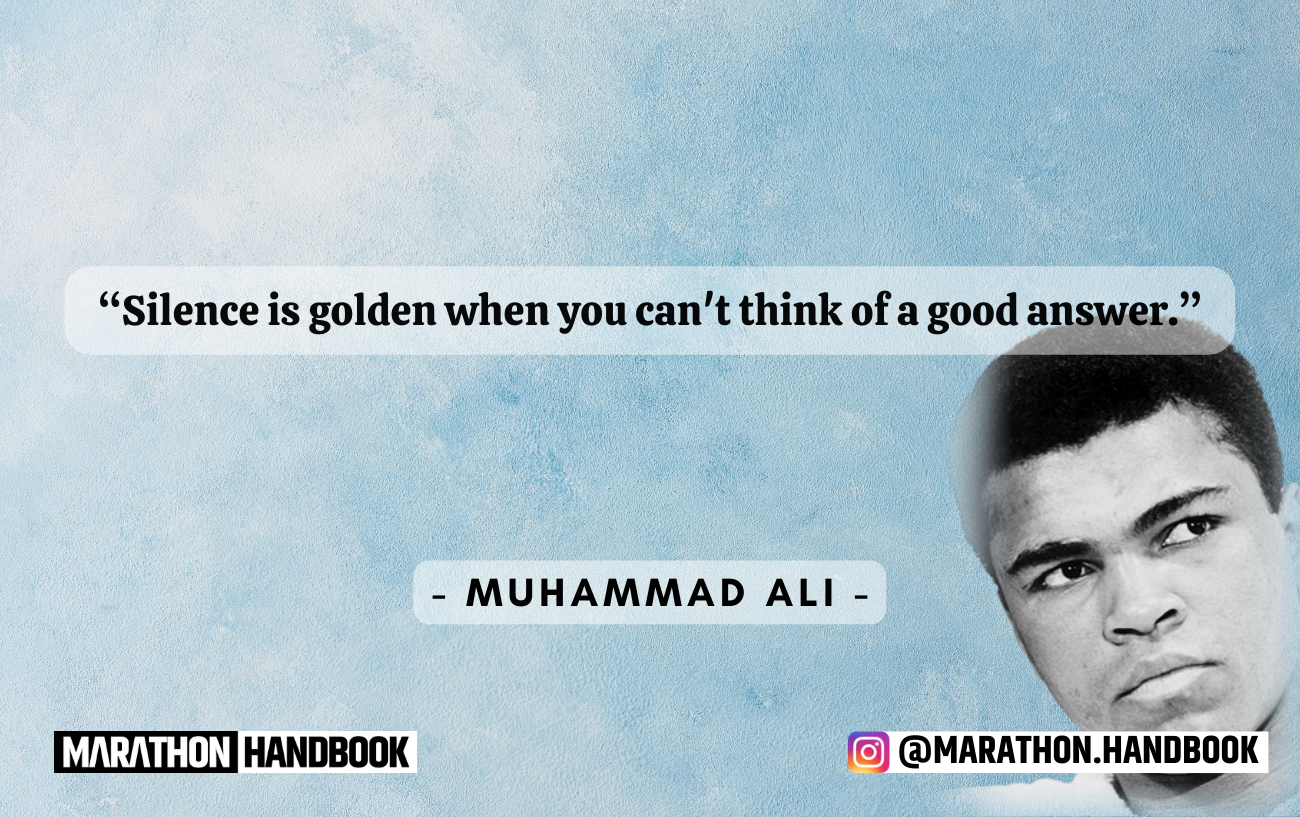 “I’m young; I’m handsome; I’m fast. I can’t possibly be beat. They must fall in the round I call.”

“Champions aren’t made in the gyms. Champions are made from something they have deep inside them — a desire, a dream, a vision.”

“I know where I’m going and I know the truth, and I don’t have to be what you want me to be. I’m free to be what I want.”

“Only a man who knows what it is like to be defeated can reach down to the bottom of his soul and come up with the extra ounce of power it takes to win when the match is even.”

Muhammad Ali was a master of words. He had plenty of wisdom to share, and we’re lucky enough to be able to learn from it. Hopefully, after reading these Muhammad Ali quotes you’ll feel inspired on your own journey.

Muhammad Ali will forever be an inspiration as both a boxer and a human. Even though he has passed on, his words and wisdom will undoubtably live on.

Still looking for some fitness or health motivation? – Check out our top running quotes and training motivation quotes.

Paul Smith
M
Paul Smith recently completed his first 100 mile ultra, graduating to the field after discovering running in 2014 and getting hooked on 5k's and 10k's.

Join over 100,000 runners and get our top 10 fresh articles and tips straight to your inbox every Monday morning
+ a free copy of my ebook,
The 26 Golden Rules Of Running!

Marathon Handbook was founded in 2016 and is run by a team of coaches, runners, and fitness enthusiasts.

We're passionate about helping others achieve their health and fitness goals - whether running a marathon, eating better, or getting fit in the gym.

Also from the Marathon Handbook team:

Income disclosure: We are reader supported, and earn affiliate commissions when you buy via links found on marathonhandbook.com.