Hoka One One Rincon 3 Review: Introduction

The popular athletic shoe company Hoka One One (pronounced O-NAY O-NAY) have upgraded their Rincon road running shoes. This shoe, being their third rendition, ensured that it came packed with all new changes to turn the shoe from good to great.

The Hoka One One Rincon 3 (Amazon link) is a lightweight and versatile running shoe with changes including a thinner asymmetrical tongue, a vented mesh upper, and added foam on the outsole for more durability.

While I have my opinions about the shoe, these changes are only some of the important features of the Hoka Rincon 3 shoe. 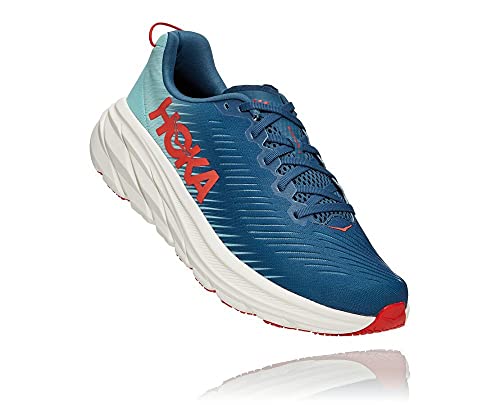 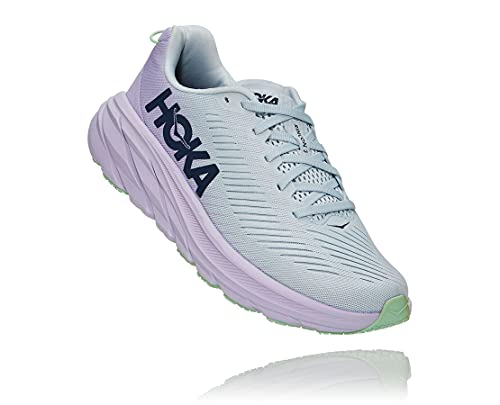 Hoka One One Rincon 3: First Impressions

The other Hoka shoes that I have tested in the past are very different from the Rincon 3’s for many reasons, but primarily because they are more maximalist, so you can imagine my weariness before testing these shoes.

However after a bit of research, I was pleasantly surprised to see the upgrades that were made to this shoe to make it better than the last, so let’s get into those changes.

Structural Design and Changes From Rincon 2

The structure of the shoe features a 5mm drop, they weigh only 6.50oz in women and 7.70oz in men. The spring measurement (the curve showing how high the toe box and heel are lifted from the ground) is 35x22mm in women and 38x24mm in men. The volume of the foam in the midsole sits at 464cm3 in women and 603cm3 in men.

As I mentioned earlier, the Rincon 3’s are indeed the third rendition of the Rincon shoe and with that came some changes, according to Hoka’s website include “an asymmetrical tongue, thinner pull tab and a vented-mesh upper for ultimate breathability. Our extra-light midsole foam sports aggressive cutouts and enhanced rubber coverage for improved durability.”

And beyond the changes to the shoe, some of the other features include, a diagonally cut mesh upper to offer ample breathability, a heel pull tab, a revised meta-rocker to allow for quick acceleration, a full-compression EVA midsole, and a slim tongue to reduce more weight.

Road Testing The Hoka One One Rincon 3

I have been running in these shoes for a couple of weeks now, in varying environments.

I have tested these shoes on the road, on a treadmill, and even in a short race. These shoes have racked up some miles on them in the short time I have been testing them out.

Something interesting that I noticed in these shoes was how dynamic the shoes made my running. I have pretty much always considered myself to be a “slow runner,” but within the period I have been using these shoes, I managed to chop off an entire two minutes off of my mile time and my average pace when running long distances.

The Rincon 3’s are a neutral stability shoe with a balanced cushion. This style of shoe is completely opposite from what I have always enjoyed running in. I love an overly cushioned, stability shoe, as I mentioned in my Hoka Arahi 4 review.

However, the Rincon 3’s offer a decent amount of responsiveness without sacrificing cushion and they have a wide toe box and help to stay stable without ever feeling stiff.

Do the Cons Outweigh the Pros?

While I do really enjoy running in the shoe, it cannot be perfect and that includes the very structural features that I previously mentioned. Even though the shoe still has cushion and stability, it remains to be a thin shoe. Because it is a thinner shoe, it could be a bit more flimsy than you may like.

I probably would not recommend this shoe for anyone struggling with knee, hip, or lower back pain. This is not because I think the shoe is bad, but because in comparison to maximalist cushioned running shoes that Hoka makes, I believe there are better alternatives if you have pain in any of those areas.

I really loved that the shoes, right out of the box, were ready to go. This is a feature of most Hoka shoes that I have always loved. Hoka’s rarely need time to break in and provide comfort with each run, walk, and everything in between.

Just like most running shoes, it is a good idea to size up one-half size. I wear between a 6.5 and a 7 in Women’s and always wear a 7 in my running shoes and the Rincon 3’s are no different in choosing a size that will give you room for your foot to move forward some while running.

Something that I have a love/hate relationship for in this shoe is the tongue. As mentioned in my last Hoka review, I disliked the movement in the tongue while running in the Arahi 4’s.

The tongue on the Rincon 3’s is thin and asymmetrical, which I like because the tongue follows the natural curve of your ankle. Even so, the tongue does seem to get lost in my shoes the longer I wear them. This movement does not bother me nearly as much as the Arahi 4’s because of how thin the Rincon 3’s tongue is.

Clearly, I cannot make up my mind on whether or not I like the tongue. The tongue has both positives and negatives and yet does not bother me enough to say that I do not like it, but it could use even more improvement.

Hoka One One Rincon 3s – Worth the Price?

As for Pricing Hokas, they generally remain at a mid-range price point. 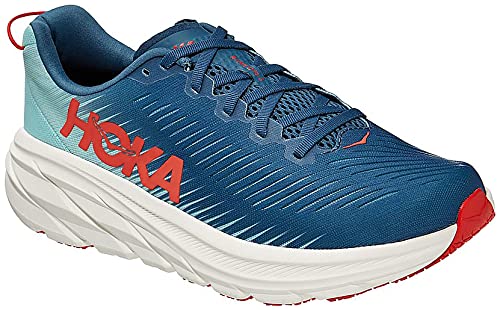 I believe that the lower price for a shoe that looks and feels like this one is well worth it over a competitor’s more expensive shoe that will not keep you as secure and comfortable as these.

This pricing level allows intermediate and experienced runners to test out a new shoe and new runners get a great quality shoe without breaking the bank.

Hoka One One Rincon 3 – Takeaways

I almost always will recommend Hoka’s over any other running shoe brand for new runners. In the several shoes I have tested from them, I have never truly disliked one of their shoes. I have preferences with each shoe I try, but Hoka’s have never steered me wrong.

These Rincon 3’s are probably not a show I would recommend to brand new runners, as they are not stability shoes and if someone does not yet have the correct form, there is a higher risk of injury.

However, for those who have enough running experience to know what they need in a running shoe, the Rincon 3’s could be a great next shoe.

In my own experience using the shoes, I have been able to see the dynamic possibilities this shoe contains. While the shoe is far from being minimalist, it also steers clear of being maximalist. The Rincon 3’s are a happy medium for a maximalist runner looking to grow in agility.

I have been able to chop minutes off of my pace and generally feel like I can run faster because the shoe is very flexible and lightweight. They are shoes designed for speed and they live up to that standard.

Finally, while the shoe is not perfect, nor the top pick for every runner, I do know that the Hoka One One Rincon 3’s are a great shoe, with quality upgrades, and all being at a great price.

Mikaela Baker is an avid athlete and fitness enthusiast. After two knee surgeries in 2017, she shifted her focus from dance to other means of exercise and found joy in running, hiking, and weight training. She lives in New York City and spends her days running through Central Park and right next to the East River!