The Marathon Des Sables is a 250km self-supported race across the Sahara desert.

Now with over 1200 entrants each year, the event is the biggest of it’s kind on the planet.

Participants usually train for months to condition their bodies and prepare for the race – but often other commitments and time limitations mean many runners turn up at the start line under-prepared.  James Bowkett gives his first hand account of participating in the Marathon Des Sables, his first ever ultra-marathon, with less preparation than he would’ve liked . . .

I’ve always been a bit of seat of the pants sort of a guy and I’ve never worried too much, in my running career, about finishing first: I am 6’5” (197cm) and for the past decade ~90kg.  I am not built for running.  All this means that when, after discussing Marathon des Sables in Hong Kong with close friends, Kiel sent me an email saying “today is the day” I didn’t hesitate to sign up for the 2016 edition of MdS.

After all, you have only to beat the camel.

Having signed up for the race way back in 2014, before Christmas 2015 I asked my now wife to marry me at the top of Glacier de la Chaupe on Bellicote – and soon after I moved out to Kurdistan to join her.  In short, in the two years between signing up and leaving for the Sahara my life moved on, I was not in the same place physically or emotionally that I had been on that morning in 2014 when I signed up.

Physically, I’ve spent the past several years trying, slightly sporadically, to strengthen my feet and run with more of a forefoot style – this resulted in repeated injury as my lower legs have not adapted as quickly as I have demanded. I ended up with severe tendinopathy on several occasions.  This forced rest…

I quite like kit, so I gave some thought to this…starting some time ago…but didn’t want to spend too much extra cash on, well, kit. I already had a rucksack (OMM Classic 25l) so I figured I’d use that.

Then I bought a new fangled inflatable Thermarest, which is wonderful; light, comfortable, warm…but so noisy I’d not recommend it.

I also invested in a sleeping bag, being a larger chap this took some thought.  I ended up settling on a Yeti Passion One, which comes in a large. It really is astonishing, if I ever go camping with my wife I won’t have a look in, before it started warming up, here in Erbil, it was her go-to item for wrapping up on the sofa.  It’s like wearing a warm, dry cloud.

For the rest of the kit,  I left it a little to the last minute, I had hoped to get a WAA pack as offered for attending the MdS Expo in 2015.  Unfortunately when the Russian’s allied with Assad in Syria, and started flying cruise missiles over Iran andKurdistan, I got stranded in Erbil and so missed the Expo.  So no WAA pack for me.  Fortunately my old OMM 25l was on standby.

I also spent a lot of time emailing Colin & Elisabet at myRaceKit for advice and bought much of my kit from them, I even gave their details to my Mum for my Xmas presents and they, and she, surpassed themselves.  The key items I got from Colin & Eli were gaiters, two bottle holders and an OMM Trio Map Pouch, the latter two of which I cobbled together onto my sack with a stanley knife and zip ties. The map pouch needed two loops of string in order than I could also carry an extra 1.5L bottle on my chest.

The event itself was and is astonishing.

That’s not to say it doesn’t have its upsides, starting each morning with close flybys and ‘Highway to Hell’ blasting out across the sand looks awesome on video…in person it’s spine tingling.

But of course that’s only the first part of the first leg of each of the six mornings. Thereafter you have to haul yourself, and your supplies, across all ~250km of desert while carefully conserving your water and indeed your strength. In the heat of the desert those two go hand in hand.

I got close to getting in trouble on Day 2, and it was entirely my own fault and avoidable.  I let the fun get the better of me – I felt pretty fresh early on, so pushed on…which was great fun but way beyond what I had prepared for.   I’d been taking two salt tabs every hour or so, but not having a watch I can’t be sure I had a great handle on time either.  And I drank too much of my water early on, so I got to the end of the 3rd leg on the vapours in my water bottles, I owe my friend Matt thanks for sticking with me through that section.  I felt terrible, but luckily it didn’t set me back too much. The lesson: easy does it.

Back to the upsides –  there are the conversations with those who’ve been dealt hands much worse than your own. There are innumerable competitors taking part for charity, and they all have noble selfless reasons for taking part that I know made me feel somewhat embarrassed.

And there are the conversations missed, by those who you overtake but who churn on past you whilst to stop for some shade and a drink.

Injuries are inevitable, the hardened runners I know all talk about training through niggles that I’m pretty sure would stop me in my tracks. Don’t get me wrong I’m sure I am tougher than the lot of them, and could drink several of them under the table, one after the other…it’s just that their priorities and mine are VERY different.

I was very fortunate to line up at the start with close friends, and we soon made a further firm friend in Dave who joined us in our tent. Well perhaps more accurately we joined him in his tent. If you won’t be starting with friends you’ve known for years, don’t worry. After 7 days with rationed water you’ll have made friends for life.

My great success with MdS was arriving on the start line injury free, and making it to the penultimate day with no more discomfort than I was happy to deal with. There were of course blisters, I got them tended by the medics at every opportunity, and that is what I’d recommend to all. Visiting Doc Trotter also has the significant upside that it gives you every reason to wash your feet and legs below the knee, and self massage if you will.  Have a chat to your physio/osteo/massage therapist about pressure points and learn a little self care, if you don’t have any of those well perhaps you should.

After the Druids race way back in November 2015 I was deeply broken, my feet having got wet on Day 2 in shoes too small & not suited to my feet.  After MdS I was in comparison spritely, a touch of tendinopathy, blisters all bound up but otherwise by the time I got home, OK.  The key had been all the care I, and Doc Trotter, had lavished on my feet during the event – look after them and they’ll look after you.  Don’t get sand on your feet, keep you feet as dry as possible, use 2Toms & Gurney Goo or equivalent. 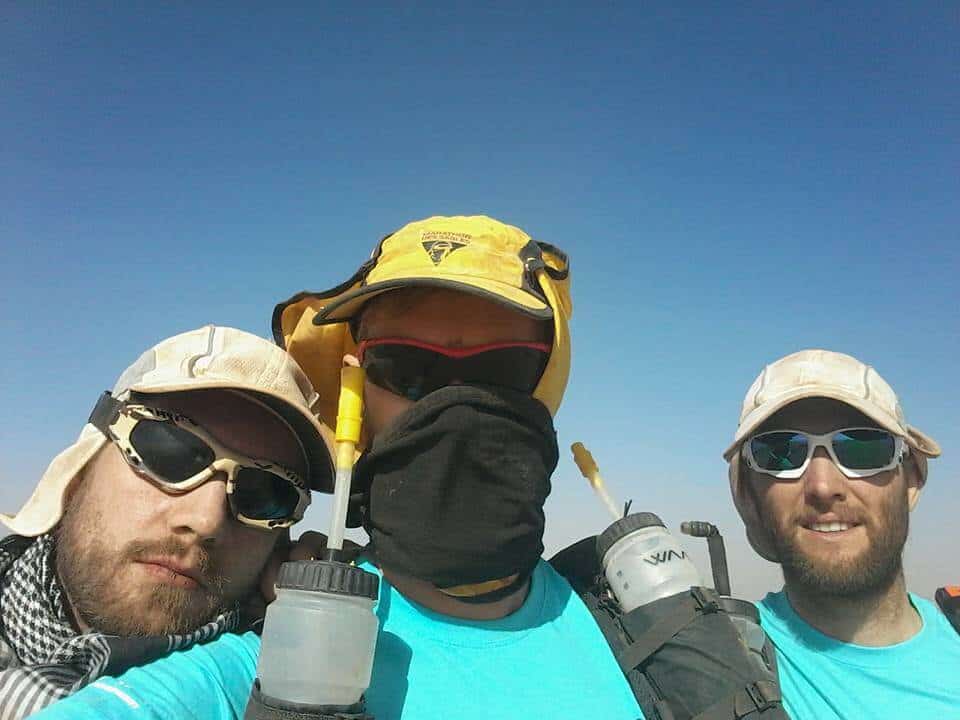 Shoes – this is far too personal so I won’t pretend it is meaningful; I used Cascadia 8s which worked well for me. You will want plenty of support, racing flats only work for the racing snakes…

Gaiters – myRacekit make great gaiters they are shorter than the parachute silk option so less likely to snag and allow more evaporation of sweat from your legs, and they don’t have zips like those sold by WAA which were the source of much misery for my tent mates.

Pack – my recommendation would be the Raidlight Desert Race Pack. It’s generously sized and robust, the MdS pack seems less robust, and the Raidlight still has a large chest rig which helps balance weight and easy access for snacks/road book. The Raidlight bottles & holders are also great.

Sleeping Mat – I used the very impressive Thermarest Neoair, but cannot recommend it as mine burst on the long day, it’s also noisy. It’s much easier to have a folding mat that’s not vulnerable to puncture. I’d choose full length every time as a good nights sleep matters. If you do go inflatable, for gods sake carry the repair kit…

Clothes – again very personal but I would recommend X-Bionic, it’s high cost but for warm environments work well for me. Eli Barnes reckons that colour doesn’t make a difference to her, but prefers loose fitting.

Evening clothes – I carried merino wool top & bottoms, and used them every evening for around camp & to sleep in. I slept really well.

Head torch – it’s a slight risk in terms of trips & falls but I went for the Petzl e-lite which was entirely sufficient for me. Whatever you go for needs to have a red light for in camp!

Desert Compulsory – myRacekit will sell you one, go with that it’s definitely the easiest way to go.

Food – you may find it hard to cut weight here. Macadamia nuts are the highest calories/gram, but there is a limit to how many you’ll want to eat. Chorizo, Pepperami and pork scratchings all do well and the salts and fats are a bit of a life saver. Dried fruit is also good, mixes things up and helps keep you regular. The bulk of your food is likely to be retried meals, they’re really not bad…at least if you have a stove to heat/rehydrate, I took all high calorie meals (i.e. 1000kcal +) I could have made do with the regular and saved a bunch of weight. Tea bags, take plenty they have a remarkable impact on morale…I didn’t come across anyone who declined a sip of hot Earl Grey and it made a magnificent sunrise on the long day all the better.

Stove/Cooking – many don’t bother heating water, if you’re really quick you’ll be done in time to allow the sun to do your work for you. For the rest I recommend a cooking cup, and a box of Esbit fuel; you can usually find rocks around camp to build a pot support. The Esbit won’t burn as well as it does in a stove but it’ll help, and it means you can brew tea which is a godsend.