I find that running is a great way to read more books on the move.

Reading is one of my favourite past-times – along with running – but I sometimes struggle to find the time to sit down and focus on a good book.   So instead, I load up my iPhone or old iPod with audiobooks and listen to a good book while I run – two birds with one stone!

Here is a selection of some of my favourite running-related audiobooks – as well as a link to get two free audiobooks!

Note:  all the books are running-themed, but I’ve selected books from a variety of genres and interests to try and keep it interesting.

(looking for more book recommendations?  Here are our top 26 books for runners). 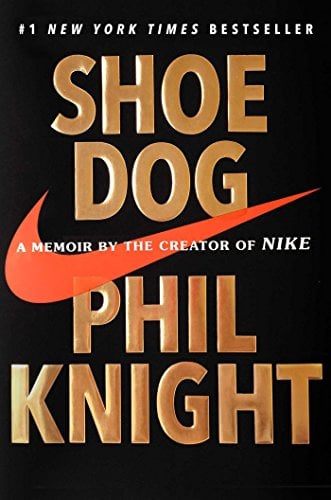 Shoe Dog is the story of Nike’s early years, told by its founder Phil Knight.

From travelling the world and deciding he wanted to start a business, to filling his parents’ basement with thousands of boxes of Japanese shoes, Phil’s book is colourful and full of great stories.

I wasn’t sure what to expect from what could be viewed as a business book by the founder of one of the world’s biggest brands, but what you get is a very human and relatable story of one guy deciding to try and start a business from his passion.   Phil was a track and field guy in his earlier year, and much of Nike’s early success, it turns out, comes from him selling shoes out of the back of his car at track and field meets across Oregon.

The book also details how Phil worked with his maverick running coach, Bill Bowerman, to develop some of Nike’s most popular and enduring designs – in his waffle iron.  Phil’s ongoing battles with the Japanese manufacturers are also pretty amusing.  In the end, Shoe Dog is a great all-round story capturing the characters involved in the development of what has become one of the most iconic sports brands in the world.

2. The Obstacle Is The Way, Ryan Holiday

The Obstacle Is The Way has been one of those books that has changed the way I look at the world – easily one of the best books I’ve read in the past two years.

It is essentially a strategy book, teaching you how every obstacle presents new opportunities.   Using examples from all walks of life – be it George Clooney or George Washington – Ryan Holiday shows how the countless figures throughout history have used setbacks and troubles not just to cope, but to thrive.

The book is short, sharp and has no fat on it – all the chapters are brief and move along quickly.  I’ve found the audiobook to be a great format for this book – its easy to follow but powerful nonetheless.

All the principles in the book are based on Stoicism, by the way, which despite being a 2,000+ year old philosophy can be directly applied to running far – see my post on it here.  Luckily for us, Holiday doesn’t get bogged down by history or theory – the book is punchy and relevant. 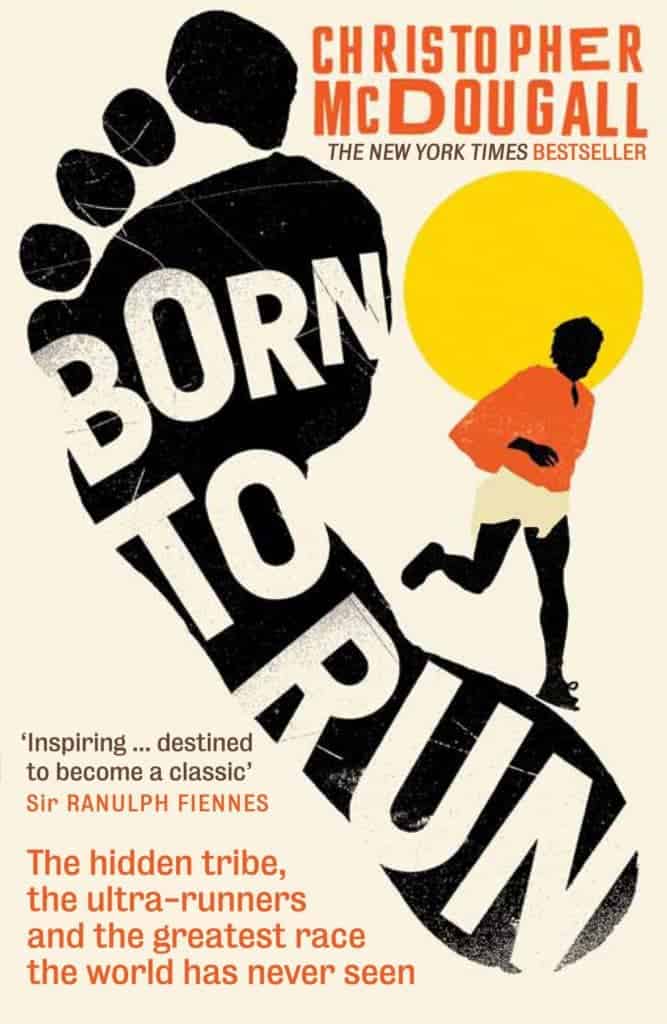 Over 8 years after it was initially released, Born To Run has been many things to many people.   An adrenline-fuelled travelogue, a potted history of ultra-running, a manifesto for barefoot running, a thesis on human evolution and a natural sports nutrition guide…Chris McDougall’s bestseller packed a lot into a little book.

For those who somehow haven’t heard of it yet, BTR tracks runner and journalist Chris McDougall’s journey into the Copper Canyons of Mexico in order to take part in an ultra-marathon with some of the top names in ultra-running (including Scott Jurek) and the local Rarámuri tribe – who run with little more than a sheath of rubber to protect their feet.

Along the way, McDougall revisits the history of distance running, and explores how shoe design had evolved to provide more-and-more cushioning – and why that could be a bad thing.

It is a perfect audiobook – as entertaining as it is informative – McDougall’s pace meanders at the start then hits 100kmph and doesn’t let up.   The book’s impact can still be seen every time you pass someone wearing minimalist running shoes or sipping on a chia seed smoothie.

The book was initially divisive, but has now became one of those tomes that every runner has to read. 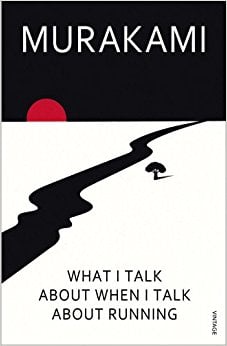 In case you haven’t heard of him, Murakami is one of my favourite authors – he writes weird, otherworldly books that are at the same time accessible and have that hard-to-define escapism quality.   He’s also a runner, and in this – one of his few non-fiction books – he opens up simply and philosophically on all aspects of his running.

The book very loosely follows his preparation for the 2005 New York Marathon, which leads to him reminiscing about running in different parts of the world – Hawaii, Boston, Tokyo.  His humble way of chatting about his approach to marathons – its rare for him to take longer than 3hrs 45mins in a marathon – is engaging and leaves you feeling like you’ve had a great conversation with a fellow runner.

I was chatting to a friend recently who doesn’t run, but she read WITAWITAR after checking out some of his other works, and found it totally engrossing.   As well a reflection on a lifetime of running, the book is a glimpse into Murakami’s own life, one that is usually hidden behind his obscure stories. 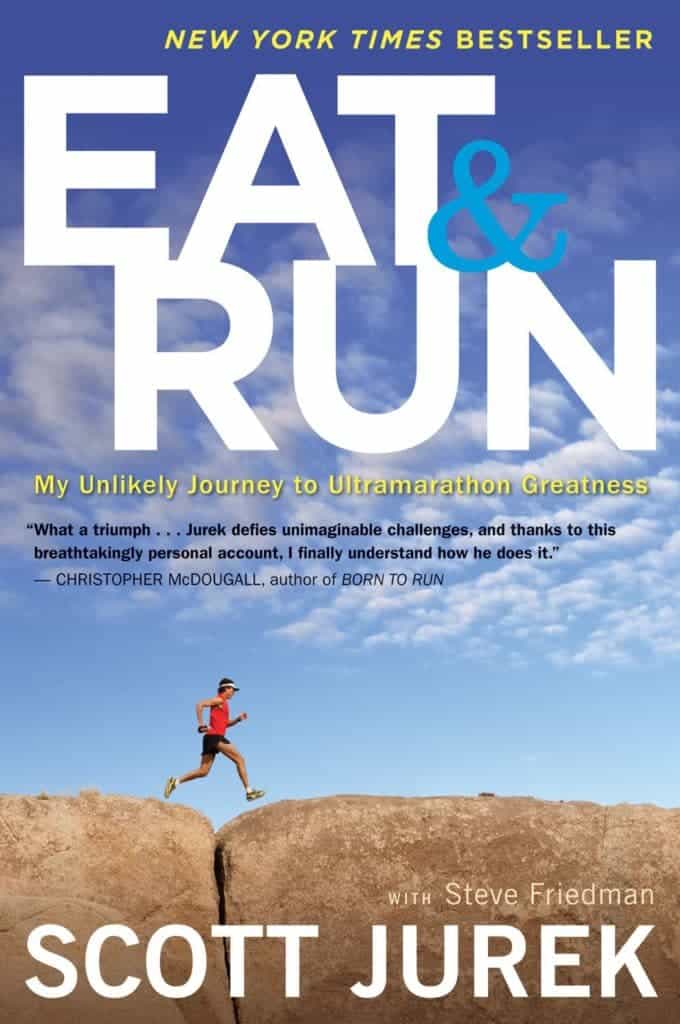 OK if you think my book choices have been a bit meandering so far then here’s a book by a real-life ultra-running hero.

In this, his memoir, Scott Jurek tells the story of how he was an unlikely ultra-runner – growing up in snowy Minnesota, his real passion was for Nordic skiing.

However during his college years he started running long distance events, at first just to have a go, but before long he found himself finishing on the podium.

Since then he has conquered the world of ultra-running, setting new course records at the Badwater Ultramarathon (160 miles across the hottest place in the USA), winning the Western States seven consecutive times and taking part in a little ultra involving a lost tribe somewhere in the Copper Canyons…

Amongst the tales from the trail is Jurek’s own personal story of switching to a plant-based diet in 1997 after seeing his immediate family’s serious health problems, which he now cites as key to his athletic performance and recovery ability. 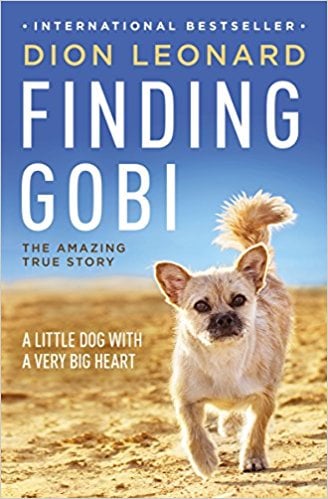 The last time I saw Dion Leonard was around 18 months ago, when we went for a training run in his adopted home town of Edinburgh.  At the time, we both happened to be training for 4 Deserts races – me for Namibia and Dion for the Gobi March.

Dion’s Gobi race ended up being eventful, in more ways than one.   The runners faced extreme weather and sandstorms and a tough battle for the podium – Dion ended up sacrificing his chances of the no.1 spot to help out fellow competitor Tommy Chen, who was in a bad way on the long day.

But Dion’s life changed during that race for another reason.   On the 2nd day, a little dog began running next to him, and ended up following him through most of the race.   This book is Dion’s story about the race and meeting Gobi, and his subsequent decision to adopt the dog and the whirlwind of media attention, espionage and surprises that came with it.

In the end, Dion moved to China for 4 months to stay with Gobi while she was undergoing the quarantine process.  His subsequent re-telling of the story, ‘Finding Gobi’, has become a media hit and its appeal has stretched far beyond distance runners and dog lovers.  A perfect runner’s tale to listen to on your workout! 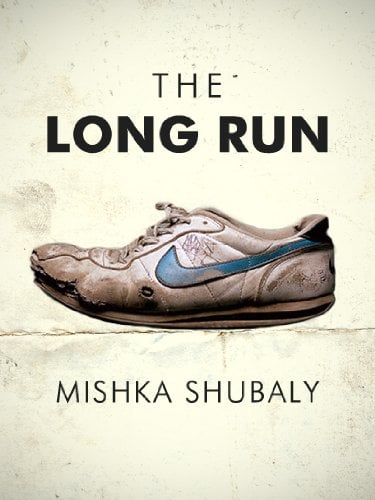 Mishka Shubaly was never a runner (in fact, he wasn’t a writer either, but that hasn’t stopped him).   In circumstances that will be familiar to many distance runners, Mishka found himself struggling with addiction to drink and drugs after years on the road with bands.

It was only through a fluke that he found he could actually run – physical exercise was something that hadn’t been high on his priority list.   Mishka’s additive personality suddenly had a new focus, and he found himself running 100km non-stop races.  The Long Run is Mishka taking you by the hand through some of his darkest experiences, and some of his most transformative.

Mishka heard about Amazon Singles so decided to write something about his running experiences.   What he produced went on to become one of the most read books on the whole Kindle store.

Mishka’s books are ‘Singles’, in that you can read them in just 2 to 4 hours normally – so this audiobook is a great shorter option, and at 2hrs 8mins could be listened to in one run.

Finally, in partnership with Amazon, you can pick up two free Audible audiobooks with my link here:

The deal is that you sign up to Audible and get two free Audiobooks, and your first 30 days for free.   You can also select any Audiobooks from their library (which includes almost every non-obscure book you’d find on Amazon) and they’re yours!  You can then cancel the subscription whenever you like.   Audible have their own smartphone app so you can listen to your audiobooks wherever you are, too.

So, essentially its two free audiobooks – what are you waiting for?