Cynthia Fish became one of the first women to complete the ‘4 Deserts Grand Slam Plus’ in 2016, completing five 250km races in a calendar year.

She has also completed several other stage races, such as the Global Limits races. Cynthia walks her stage races – she is consistently ‘near the back’, but also has a consistent pace and strategy that works very well!

Cynthia enjoys spending time during the races taking in the scenery, getting to know her fellow runners better and treating the whole thing as an opportunity. You are unlikely to come across a more positive person in a campsite. 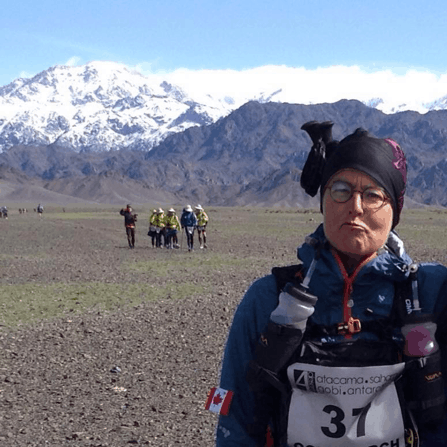 Hi Cynthia, you’re a celebrated ‘turtle’ – tell me a bit about the benefits of taking it slower.

The hours between 3 pm and dark are my favorite time to be outside- it’s getting cooler, the light is changing, perhaps getting crisper, the sun is setting, with all the change that brings – it is my magic time. (I don’t object to a good sunrise either, I just resent getting out of my warm bed to see it.)

That end of time day is also the most peaceful in my head- I’ve pretty much wrestled my own demons, and solved a few of the world’s problems, so my mind is fairly still. No chattering voices upsetting the steady tic tic tic of the poles.

It is also a time when the competitors are the most spaced out, so you often really feel solitary, alone with the world around you. One of the great features of the races is the alternating aloneness on the course, and the company in camp, so being out there by yourself is a feeling to be cherished and treasured, perhaps even a little indulged.

Finally, it’s the welcoming sound of the camp chatter. I was probably a sheepdog in an earlier reincarnation. I am strangely comforted by the fact that most of the racers are safe in camp. I can usually hear camp before I get there, so it’s a bit of a transition moment from alone to together as I approach.

Any ‘secret sauce’ tips / quirky things you do to help you during stage races?

Over time I have collected a small number (read lightweight) objects or foods that have made the races more comfortable. I started with a silk scarf that I find super handy to use as a bandana, a neck warmer, a hand warmer… I sleep with it instead of a scratchy buff if it’s cold, and I will often keep it on for the first few kilometers of the day…. it’s just a little taste of soft that feels nice.

I added a very thin, very light (about 50 grams) sleeping mat. I just roll it out and voila- some protection against the chill, the wet, the prickly bushes or the rocks- without the time and effort to blow up the inflatable mat, which I also bring.

The rollout mat is especially pleasurable during my golden hour- the time I use to recover with my feet up and my recovery drink and snack in hand. I unclip it, roll it out, grab the food and voila! instant comfort. An hour later, I am ready to inflate the mat, but for that one hour. bliss… It also protects the blow-up mat from particularly rocky bits, so it’s also a bit of insurance.

I wear a pair of biking shorts over my compression leggings. The shorts have pockets in them and I carry my headlamp, my Kleenex, my hand sanitizer, and other bits and bobs. I also carry a really lightweight grocery bag, in which I put the day’s dinner and breakfast items, and my bowl and cup and spork.

Again, I sort out the food once, and I never have to rush back to the tent to get something I might have forgotten. Similarly, I stash my hat and my mitts in my warmest jacket – I figure if I need the hat and mitts or jacket, then I will shortly need them all. 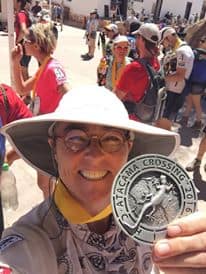 How do you approach a stage race – what’s your strategy at the start of the week?

When I was getting ready for my first race, I rehearsed each moment within the race, trying to figure out ways to make those moments flow as smoothly as possible.

How to snack on the trail, where to put the snacks, how to fill the water bottles without getting water all over my front, how to lay out my mat, where to put my blister kit and how to take off my socks and shoes beside the trail. Each time I went out to train, I went over and over in my mind all the scenarios I could imagine and tried to MacGyver myself out of them.

Each race starts the same way.

I wonder what on earth I am doing there.

I question every decision in my life that led me to this moment.

And then I smell the campfire, lay out the sleeping bag, look up at the stars… pure happy.

What was the biggest challenges, or scary moments, of the 4 Desert Grand Slam Plus?

The scariest moment was realizing that I had six stitches in my knee from a fall on day 2 and several river crossings yet to do on the first race of the 5.

Once I finished that race, upright and without an infection, the potential lions in the Namibian desert, the possible frostbite in Antarctica, the salt flats of Atacama, nothing was ever to going to scare me again.

And when I had to walk 4 kilometers through a sandstorm after the end of the Long March in the Gobi, from pink flag to pink flag, with eyes streaming, I wasn’t scared, I was just determined not to lose sight of the reflective tape. The most difficult (and exciting) part was traveling so much in such a short period of time to so many exotic corners of the world.

Physically, resting between the races was important. Each race was tough, and cumulatively it was hard on the system, but knowing that I was going to race over the ten months, I took it easy- always keeping something inside for the last 10km. 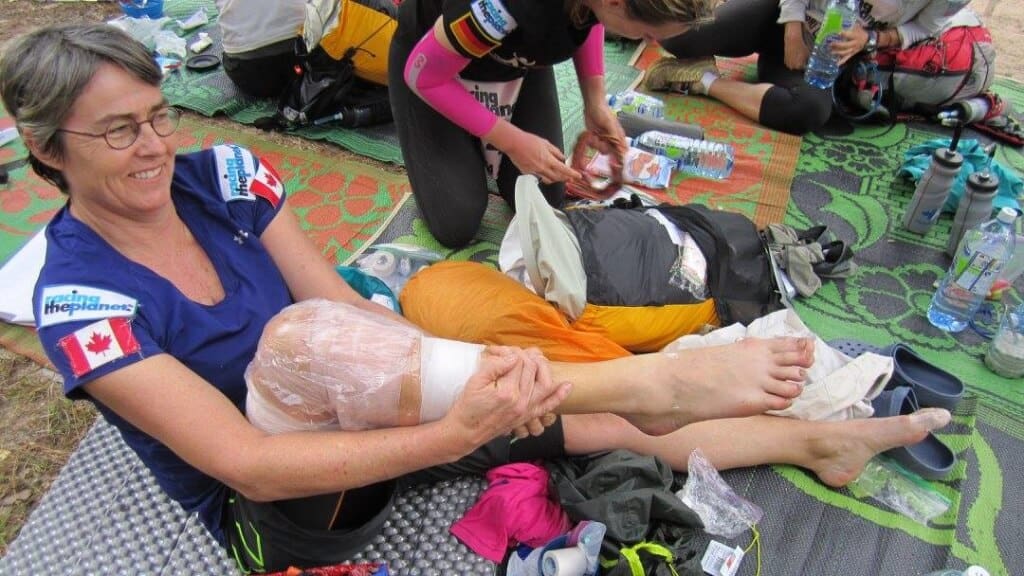 All bandaged up after the stitches!!

You need a small music machine with some good dance music and a couple of hours of podcasts on some arcane but interesting subject.

Do as many back to back long training days as you can. Walk as many kilometers as possible, everyone underestimates the amount of time they will be walking on the trail. And hip flexors get surprisingly sore surprisingly quickly.

Confidence in your kit and confidence in your ability to be able to try to make the cut-offs is what training is all about. Time spent on that at home means that your race is more pleasurable.

What was it about stage races that first caught your eye?

I started doing ultra-marathons because I am too slow to race marathons and I didn’t want to race a horse. I like being outside. I like being off the grid and alone with my thoughts and beautiful landscapes.

I like pushing myself hard, but I am comforted by the safety net the races give in terms of support and medical care. I didn’t know I liked to sleep on the ground. And I didn’t know I was good at it. Rocks don’t bother me.

The training regimen at home involves a fair amount of napping. Except for the fairly gnarly black toenails at the conclusion of the race, it’s all a bit of a walk in the park… kind of.

And you just keep signing up for more!

Obviously, I have a bit of an ultra addiction. I only started this sport 5 years ago, and I have averaged four ultras a year which is by any standard a lot. I like who I am when I do the race, and I like the person it has helped me be between the races. I worry less, have more confidence and patience, I feel fitter and stronger than I ever have before.

Excellence doesn’t have to mean podium, it can also mean putting your own best effort together and seeing where it gets you.

Check out Cynthia’s Race Report from the Racing The Planet Sri Lanka Roving Race, which was part of her 4 Deserts Grand Slam Plus challenge!