How can you truly experience this beautiful and varied planet we live on?

Competing in the RacingThePlanet 4 Deserts Ultramarathon Series would be one way.

The 4 Deserts Ultramarathon Series takes place in four deserts around the world.

Participants traverse 155 miles over several days in each self-supported ultramarathon, running through sand dunes, past an active volcano, near glaciated rocks, and by salt lakes speckled with flamingoes.

It is a thrill that comes with a price of intense and deliberate training, thousands of dollars, and total self-reliance as the runners are responsible for bringing their own supplies.

So, why would anyone want to run the 4 Deserts Ultramarathon Series, organised by RacingThePlanet?

We unearth why people run this epic ultramarathon series and what it all entails.

We also share information about RacingThePlanet’s Roving Race: their annual one-time race that is in a different unique location every year!

What is the 4 Deserts Ultramarathon Series?

The 4 Deserts is an ultramarathon series put on by organization RacingThePlanet comprising of four 6-stage 250k (155 mile) multiday races taking place in four deserts around the world.

Only a tent and water are provided.

Participants are, however, supported by highly qualified staff with experience in hiking, marathons, and ultramarathons, and medical teams specializing in wilderness medicine.

Where does the 4 Deserts Ultramarathon Series take place?

The series, named by TIME magazine as one of the world’s Top 10 Endurance Competitions, takes place in:

(you can read our editor Thomas Watson’s Race Report from the 2016 Namib Race here!)

What makes the 4 Deserts Ultramarathon Series so challenging?

Runners of the 4 Deserts Ultramarathon Series are challenged to go beyond the limits of their physical and mental endurance.

Runners must traverse the “driest, hottest, coldest and windiest places on earth, testing their limits both physically and mentally.”

And they do this self-supported.

This means runners must carry all their own equipment and food and are only provided with drinking water and a place in a tent each night to rest.

The organizer provides a mandatory equipment list, which includes a minimum number of calories, clothing, and safety gear.

Anything else the runner chooses to carry – whether that’s a sleeping pad, camera, or phone, adds to the weight they must carry across 155 miles.

They do this in the most inhospitable climates and formidable landscapes on the planet.

What is the highest elevation of the 4 Deserts races?

How much does it cost to run the 4 Deserts?

Running all four of the 4 Deserts Ultra races would cost about $24,300.

The Antarctica race (the Last Desert) costs $12,800, as it includes your bunk on a chartered vessel! This cost does not include airfare.

A deposit of $1,500 is required to secure a place, the balance is then due 120 days before the start of the race.

The race fee (excluding The Last Desert in Antarctica race), includes the following:

What makes the 4 Deserts Series so unique?

In every race, competitors find themselves immersed in ancient cultures and surrounded by stunning scenery and indigenous wildlife.

Competitors complete the events as part of a new family — individuals and teams from distant corners of the earth from different backgrounds, religions, and cultures bonded together by a common mindset and a shared experience like no other, describes the race site.

RacingThePlanet’s tagline is “more than a race” as its events have unique qualities:

How hot and cold does it get in the 4 Deserts Ultramarathon series?

“What can be the most challenging part is the extremes of temperatures where it is very cold at night and then very hot during the day,” shares RacingThePlanet’s Samantha Fanshawe, adding that some deserts such as the Gobi March do not experience as extreme temperature swings as others.

Do you have to qualify to run the 4 Deserts?

You do not have to qualify for 4 Deserts.

RacingThePlanet accepts both elite and non-elite individuals and teams who are internationally diverse, open-minded and determined.

Many RTP entrants have surprisingly little distance running background – many have never even run a marathon, and are doing the race as a personal challenge!

The qualifications require that you and/or your team complete several registration and medical forms which are provided upon registration.

How long does it take to complete one of the 4 Deserts races?

Each 250k (155 mile) course is split into 6 stages, over 7 days. The overall finishing times range from about 25 hours to 70 hours (combined times over seven days).

The typical format, though each race differs slightly, is as follows:

Day 5: 80km (with two days to complete, and an optional campsite mid-way)

Why do people run the 4 Deserts series?

Most people run the race for the mental and physical challenges—but the people and friendships are what make the experience special.

“We provide a challenging course, in a stunning location with all the logistics and the people bring it to life,” says Fanshawe.

“Every racer has their own story and everyone is different from a 70-year-old Japanese man to a student from Romania but everyone has the same goal.

At the races, you get to know more about people in 7 days than you do your friends at home in more than 20 years.”

Many competitors will visit each other after the event, register for future races together, and some have even met future spouses, say the organizers.

Being away from the modern world, disconnected from devices and the internet, and having nothing to focus on but beautiful scenery and an epic physical challenge makes these races uniqe.

Related: 250k At The End of The World – 4 Deserts Antarctica Race Report

How do you train for the conditions of the 4 Deserts Ultramarathons?

Preparation is key for training for the 4 Deserts Ultramarathons. Fanshawe offers 4 pieces of advice:

“It’s really learning how to manage every component properly, to make sure that you’re good mentally,” she shares.

“For example, when it’s going to be a sandy desert, I’ll find a gravel pit where I can run in the sand. And then, with anything snowy, obviously in Canada it is pretty easy to practice.”

RacingThePlanet offers blogs with advice along with an equipment list for racers. It also offers training plans to help runners prepare along with nutrition guidance.

Marathon Handbook founder Thomas has even written an eBook which you can grab a copy of here: The Stage Race Handbook. It includes equipment guides, lists, and training plans.

Also of note, Fanshawe says to cross-train as part of your training and run/hike for time rather than distance.

How do you keep sand out of your shoes?

Fanshawe says to keep sand out of your shoes, says to wear appropriate gaiters.

Secure them properly (don’t just use normal glue the day before the race) and try them out in sandy terrain (even a sandpit will give some idea).

To prevent blisters and chafing, she says to tape your feet and be sure to test out all gear before the race on your runs to identify any potential friction points.

Has anyone completed all 4 races of the 4 Deserts Ultramarathon Series?

Yes, 278 have completed all four races in the 4 Deserts series.

Seventy-eight have completed all of the 4 Deserts ultramarathons within a calendar year, called a Grand Slam.

Just eight people, including two women, have completed the Grand Slam Plus which includes running all four of the 4 Deserts ultramarathons plus the RacingThePlanet Ultramarathon within one calendar year.

When did the 4 Deserts Ultramarathon Series start?

According to its website, RacingThePlanet and the 4 Deserts Ultramarathon Series was founded in February 2002 by American Mary Gadams.

A former investment banker and strategist by day, Gadams was a well-known figure in adventure and endurance sport with finishes in numerous marathons, ultramarathons, and wilderness competitions around the world.

The first 4 Deserts race, the Gobi March, was held in September 2003 near Dunhuang, China. This inaugural race introduced trail running to China.

Less than a year later, in July 2004, the series expanded to the Atacama Crossing in Chile, and then in September to the Sahara Race in Egypt.

The Last Desert in Antarctica was inaugurated in January 2006.

Due to the political instability in North Africa, the Sahara Race was relocated to Jordan and then Namibia.

When was the RacingThePlanet Ultramarathon founded?

In February 2008, a fifth annual race, called the RacingThePlanet Ultramarathon, was added to the calendar.

This race, of a similar format, moves to a new country each year while highlighting the natural and cultural features of each location.

In 2021 it was held in Georgia, after a one-year delay due to world events.

The next RacingThePlanet Ultramarathon is slated for August 2022 in Lapland, the northern part of Finland.

Why is the RacingThePlanet Ultramarathon called a roving race?

The RacingThePlanet Ultramarathon has also been coined the roving race because it changes location, despite not changing its name.

Where has the RacingThePlanet Ultramarathon taken place?

The first RacingThePlanet Ultramarathon in 2008, titled RacingThePlanet: Vietnam, routed competitors through the rice terraces of Sapa in northwest Vietnam.

The 12th RacingThePlanet Ultramarathon occurred in Georgia in 2021.

Related: Complete Guide to the UTMB

Don’t be afraid to walk!

This isn’t a marathon, it’s a week-long ultra.

For most of us, it’s about just getting to the end – not getting a podium place.

And a week is a long time. Running too much to start with can cause the ‘wheels to fall off’ pretty easily.

Someone who walks the entire course at a good marching pace will likely come in the top half of finishers.

How many races has RacingThePlanet organized?

RacingThePlanet has organized 66 races and counting. Get a list of upcoming races here.

Does RacingThePlanet give to charities?

RacingThePlanet gives charities of the regions its races take place. For example, it has given more than $750,000 to the Y.L. Yang Education Foundation and Operation Smile.

Millions of charitable dollars have also been raised by RacingThePlanet competitors through its races.

When is the next RacingThePlanet race?

The next race is the Namib Race in the 4 Desert Ultramarathon Series, taking place on October 24, 2021.

This race takes place within the oldest desert and the largest dunes in the world.

Atlantic waves crashing against the sandy desert shoreline, and a fascinating array of plants and animals, describes the site.

Can you still sign up for the Namib Race?

Due to the ongoing COVID situation, race organizers are accepting last-minute entries to the Namid Race. You can sign up here.

Learn more about RacingThePlanet and its races on its website and through the documentary Desert Runners.

Check out our other Stage Race resources!

Whitney Heins is the founder of The Mother Runners and a VDOT-O2 certified running coach. She lives in Knoxville, TN with her two crazy, beautiful kids, pups, and husband. She is currently training to qualify for the 2024 US Olympic Trials marathon. 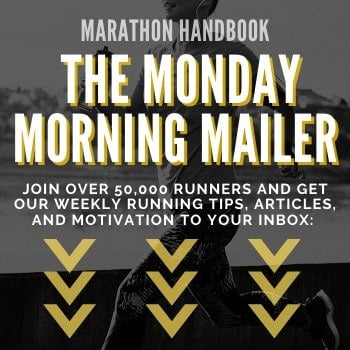