Ash Mokhtari has run the 4 Deserts ‘Atacama Crossing’ 250km stage race every year since 2009. Here, he talks about the otherworldly setting of the event, challenging personal boundaries and what to expect when you head to the driest place on earth . . .

If you can picture night skies bursting with stars and crystal-clear distant galaxies, relics of ancient Incan civilizations and an absurd dryness, then you’re onto a good start.

The vast landscape is surrounded by snow-capped volcanoes, covered by extensive salt flats and is often used as a stand-in for Mars in film shoots.  It’s been described as having an ‘Alice In Wonderland’ quality by those who have visited it.

No wonder then, that the 4 Deserts race organisers chose the Atacama to be home to one of their most enduring and popular annual races.  The ‘Atacama Crossing’ is a 250km, six stage, self-supported run through this otherworldly place.

The host town – where the action all starts and finishes – is San Pedro de Atacama, Chile.  Each year, usually towards the end of September, runners begin to descend on this tiny resort town, carrying a mountain of gear, clothes, food and other essentials on their back.  Many runners are running their first stage race, and spend their time scarpering around looking for last-minute pieces of equipment.   Then there’s some veterans – guys who have done so many of these, that nothing is too big a deal.

Enter Ash Mokhtari.   A seasoned ultrarunner, Ash enters a few adventure races every year, from the Canadian Death Race to catered races through Northern Spain.  But the Atacama is the only race that Ash goes back to – and he goes back every single year.  Ash has now completed the Atacama Crossing race every year for the past 8 years.  The organisers of the race even call him ‘Ashacama’, and presented him with the Spirit Award for the 2016 edition of the race.  When not running crazy races, Ash is a dentist in Thunder Bay, Canada.

If there’s anyone to talk to about the Atacama Desert, it’s Ash. 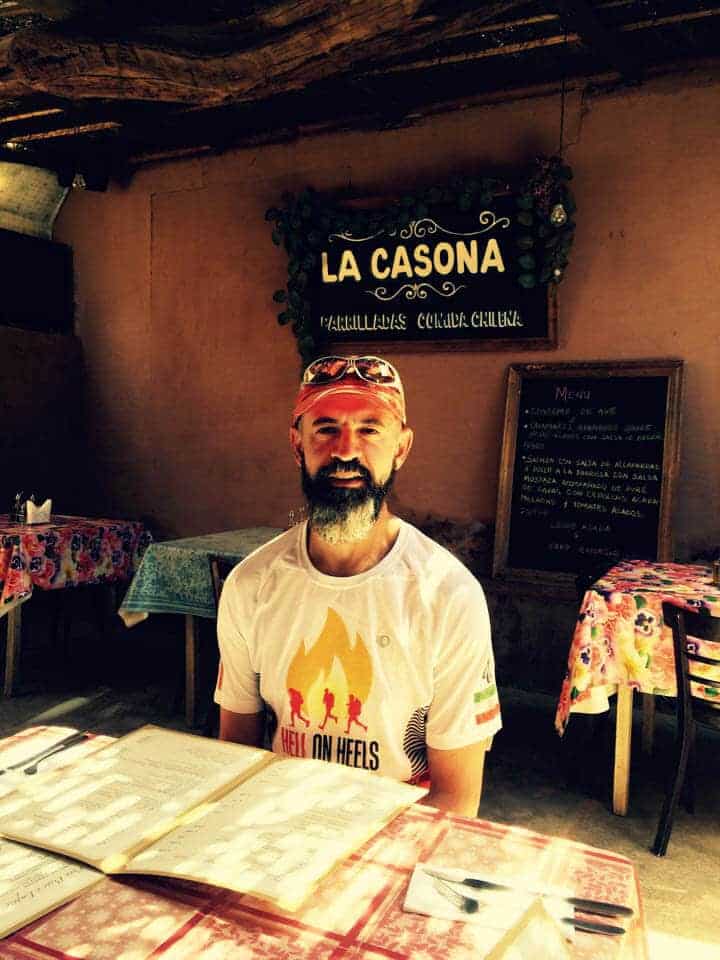 Hi Ash!  What is it about the Atacama Crossing race in particular that has made you return 8 times?

The Atacama Crossing was the first ultra stage race that I actually ran which made long-lasting impressions on me in the sense that I realized I could actually run 250 km in a hostile place with 10 kilos on my back and come out alive. I was really a paradigm shifter for me; a rare experience that allows to see everything in a different light and open up doors for one.

We all live our lives according to our collection of experiences and what we perceive of the world around us and our role and capabilities in the world.  It is these experiences and perceptions that limit our boundaries.  In that first race, I passed thorough my boundaries and realized how much more I could do.  I’ve imprinted on that moment and I go back every year, reminding myself I could push a little further. Besides, it’s become a tradition for me now.  It helps me have something to train for and look forward to when I’m at home.

Could you describe some of the highlights of the Atacama Crossing route that make it special for you?

The race starts high up in the Andes in a colourful Arcoiris Valley (rainbow valley) which is at an elevation of 3200 meters high in the valleys. It’s called the rainbow valley because of the multiple colours of the mountains around it due to various mineral deposits. The route winds up and down small passes as we descend closer to the Atacama Desert floor, running through small, narrow valleys that had been used by ancient Inca and Pre-Inca traders for millennia.

On the second day we run through a 10km long slot canyon.  It’s a narrow, deep, scenic canyon cut into the floor of the valley by thousands of years of flooding. Its definitely one of the highlights of the race and provides action shots for the all the runners. There are numerous sand dunes that we either climb or run down.  I have to say I always look forward to running down a sand dune that extends all the way from the top of a ridge to a river at the bottom of a valley.

The finish line is in the charming little town of San Pedro de Atacama.  It’s a touristy hub which is used for many types excursions into the desert or the mountains and volcanoes that surround it.

For one night, we camp by one of the lakes in the desert which are also home to flamingoes and other unlikely birds of the Andes. It’s a beautiful place. 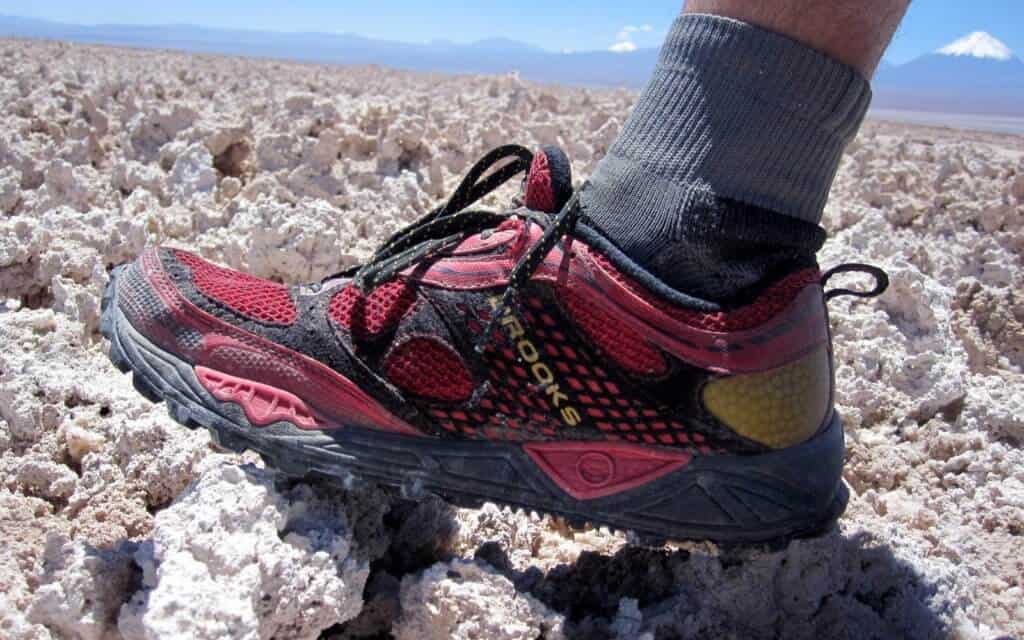 And finally I have to mention the infamous Salt Flats of the Atacama Desert, with their uneven and running-shoe-chewing terrain. They will bring even the most seasoned ultra runner to an eventual walking pace.  At places the salt flats alternate between hard-packed salt sheets, razor sharp crystals growing out of the ground or frozen-cauliflower heads that might crumble into a hole with your foot in it.

Ultimately, the people I meet during the race are the highlights of the race. The runners and the volunteers make the whole experience completely unforgettable. Some my best friends are the people I have met in these races and incredibly after just a couple of days of sharing a tent or a few hours – not even, more like minutes – of conversation on the run or around the camp fire have created long-lasting, close friendships. 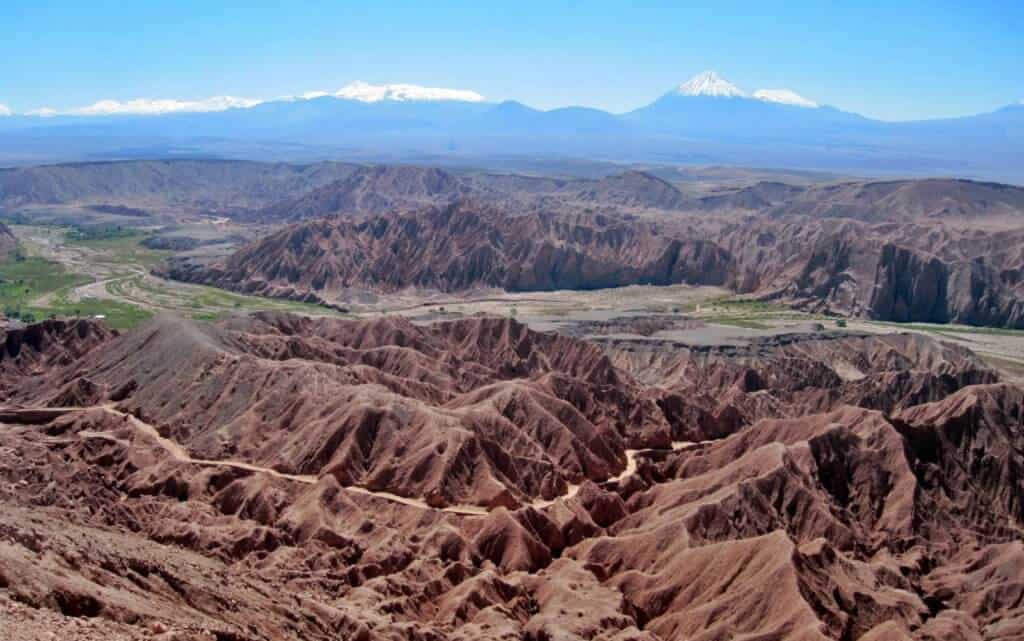 Having run the Atacama Crossing race so many times, how do you physically prepare for each one?

I start training six months prior to the race.  I have a certain mileage in mind and gradually increase that as I get close to the starting date.  Also, I live in Canada which is a frozen fridge and so have difficulty with the heat of the Atacama Desert.  So I remedy that by spending 30 minutes in the sauna after my runs.

Ideally if you don’t live in a hot place, you want to spend two weeks in the desert to allow your body to acclimatize to the heat.  The Atacama is a high altitude desert so the body needs three weeks to acclimatize to the altitude as well.  This is not possible for most of us unless you’re either retired or a pro ultra runner.  Cross training is important because you’re running in an environment that you can’t practice in, and besides, there’s the backpack.  I’d run with the pack because you want to get used to it and get your blisters and ranches before you hit the desert floor. 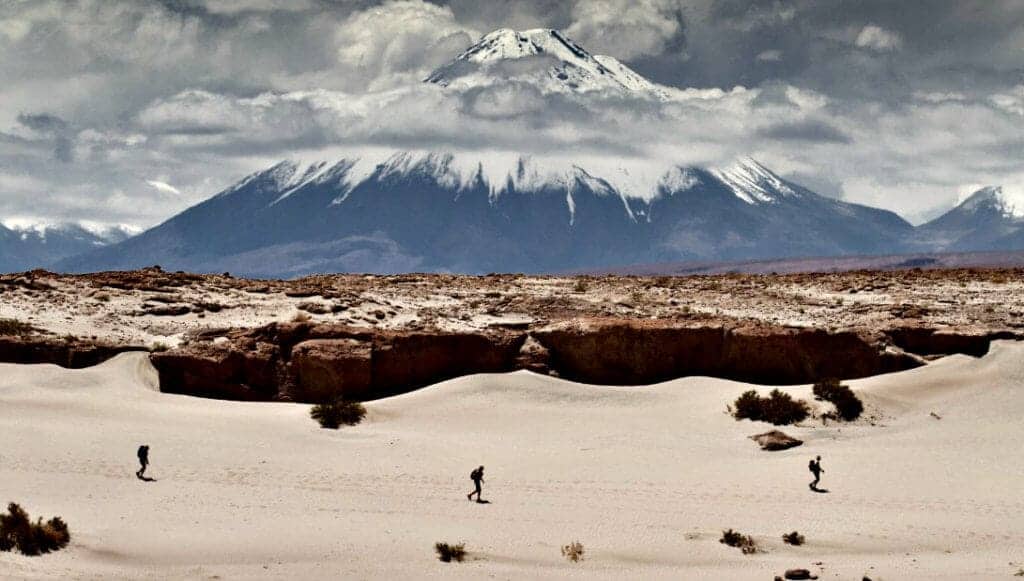 You must meet a lot of ‘first timers’ when you do this race.  What kind of advice do you give them?

Obviously training is very important. The more you train the better, but your overall experience might not get easier. Atacama will humble everybody and will not discriminate (laughing). A lot of first time runners of Atacama see the surrounding mountains and volcanos and forget that they are actually running 2-3 km above sea level.  This means there’s a lot less oxygen and much harder for the body to produce the amount of energy needed to run a marathon in the first day.  So pretty much everybody runs at full speed the first day and ends up paying for it for the rest of the race.  I’d say pace yourself on the first day, go slower till your pack is a bit lighter.  Don’t bring too much stuff.  You really have to work on your packing and cut out the non-essential items. 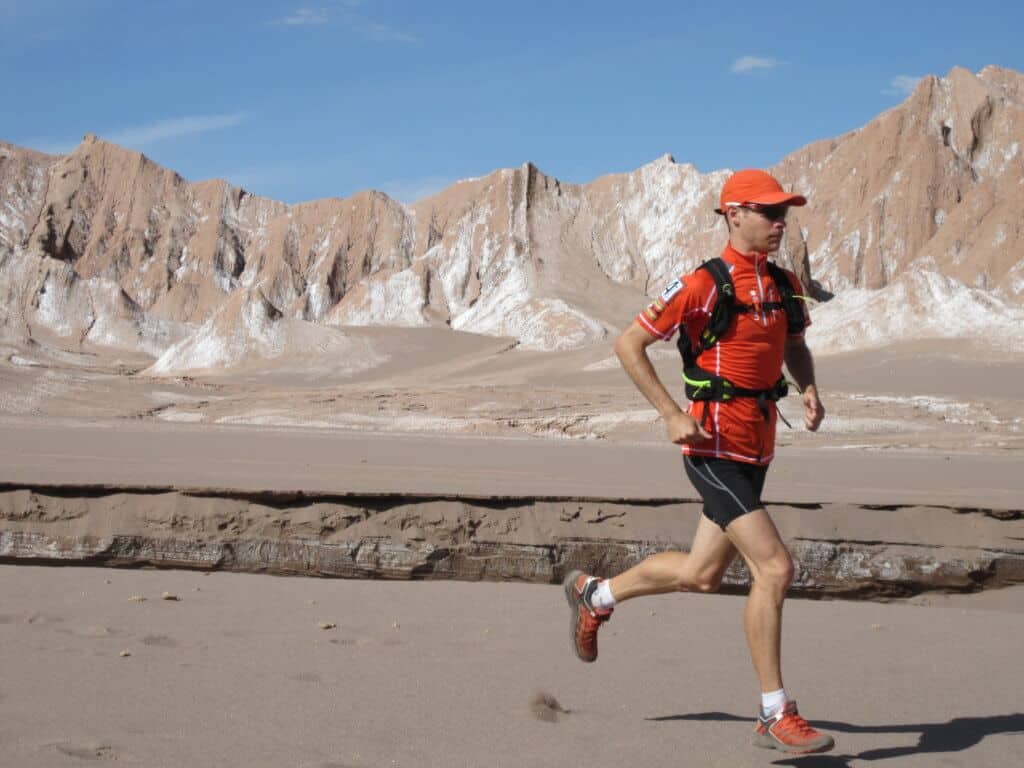 What type of food do you take on your self-supported races?

Everybody uses freeze dried food available from various brands.  My favourite is Chili Con Carne from Expedition foods that RTP (Racing The Planet) sells. There’s other companies but you might want to try them at home to make sure you can actually eat them. I recommend noodles and soups just in case you get dehydrated or have nausea and can’t stomach solids. Hot chocolate and tea. I always brings a couple of bags of chips. They’re easier to eat on the run. I don’t recommend hot or sweet foods because once it gets hot most runners can’t handle the sugar load. Nuts provide a much safer and powerful calorie bang per weight.

Do you spend additional time before or after the race in San Pedro, or in Chile in general?

I usually do. There’s a ton of stuff to do once you get to San Pedro. The town has tens of restaurants and amazing food. My favourite is ceviche chichis – basically marinated sea food which Chile has an unlimited source of.  Every restaurant in town has its own recipe and usually after the race I restaurant hop and just order ceviche. There are various tour companies that would take the tourist to various archeological and ecological sites in the desert.  A lot of people climb the various volcanoes visible from San Pedro.  And since we’re only 50km from the Bolivian border, a day trip to Bolivian Alto Planico can be arranged.

Other than the Atacama Crossing, what’s some of your other top races?

Racing the Planet stage the Atacama Crossing race but also has races in China and Namibia and a roving race which this year is in Patagonia which I’m headed to after Atacama. I ran Grand To Grand in Utah and that was an excellent race. I ran in Cambodia with Global Limits and that was really great experience. Way of the Legends in Northern Spain is a race I would do again. One of my favourite races is the Keys100 which is very scenic as it goes through the Florida Keys.  And finally closer to home, the Canadian Death Race in the Rockies; 125km of complete unpredictable-ness in 24 hours, scaling three mountain peaks and running wild in the forests of Northern Canada. 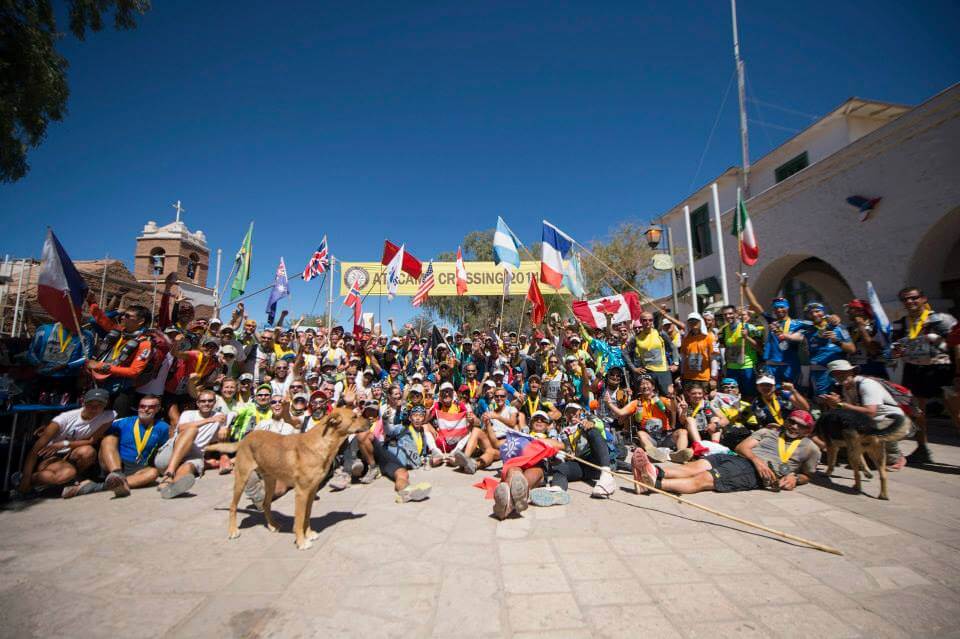