Since 2015, Apple has been creating the Apple Watch – and with each new watch, there are new features to bring in a new audience.

The Apple Watch began as a functional watch for fashion but has turned into a helpful tool to use in your everyday life, no matter your lifestyle.

The Apple Watch Series 3 (or just Apple Watch 3)- originally launched in 2017 and now with several successors – has become a firm favorite with consumers, especially runners, and is still in production alongside the newer versions.

But now, several years on from the launch, does the Apple Watch Series 3 hold up as a good smartwatch for runners?

Or has its technology been superseded?

The Pro’s and Cons of the Apple Watch 3

The watch quickly became one of the most innovative smartwatches on the market and thus introduced the fitness app on the watch.

The watch we’re reviewing today is the Series 3, which originally launched in 2017 with a base model and a cellular version, (the cellular version has since been discontinued) – and is still a popular draw.

At the time of its release, The Apple Watch Series 3 (or just Apple Watch 3) was touted for its activity tracking abilities.

It was launched with the ‘3 ring goal’ activity app, and a special Nike+ version of the watch was launched alongside the base model, highlighting the sports and fitness focus.

Is The Apple Watch 3 Worth the Price? 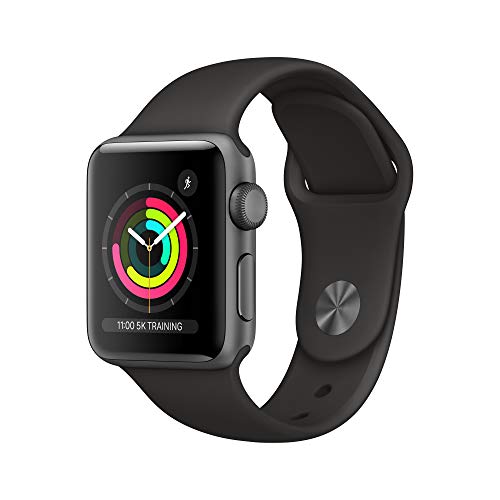 Apple is not known for being the most budget-friendly; however, the Series 3 Apple Watch just so happens to be on the more affordable side of fitness watches.

The watch is not “cheap” by any means, but I believe you are getting what you are paying for by paying for its versatility in function, brand name, and sleek design.

Apple has intentionally kept the Series 3 in production to offer a lower-price, lower-feature alternative to the latest – and pricier – Apple Watch model.

Since it is not the most expensive, you cannot expect it to track every aspect of your workout perfectly, but if you are using it for shorter workouts and are not looking for the most comprehensive watch on the market, this could be the watch for you.

I have relatively small wrists and would not want a watch to be bigger than my wrist, or many watch brands have more “feminine” colors like pink and purple when I would prefer a neutral-colored watch.

So, luckily the Series 3 Apple Watch varies in size and color to fit any person’s wants.

The watch body comes in two colors, silver and space grey, and two different sizes of 38mm (my size), or 42mm.

If you want to customize it even more, you can switch the wristband with any compatible strap on the market, made by Apple or not.

There are also soft silicon cases that you can purchase to cover the rim of your watch to make it a brighter or more specific color of your choice.

And for the aesthetic athlete, you can redesign your watch face repeatedly to look precisely how you want and be able to swipe your main screen to have as many options as you would like.

Furthermore, with the customization of the watch face, you can decide what metrics you want to be displayed at all times (i.e., Calories burned, minutes of exercise, weather, messages, calendar, etc.).

Also, the watch itself is fairly easy to use and can be adapted to quickly.

The watch is a touch screen with two buttons (a spinning crown and a single-push button) on the side to help you scroll and turn on/off your watch – it’s an extremely intuitive interface.

For anyone who currently uses other Apple products, the transition to using this watch should be a breeze.

However, the downside to that is the limited ability in use if you do not already have an iPhone.

It is possible to have the watch without the phone, but you would be limited in function without it – the Apple Watch syncs with your iPhone, so any apps you need are loaded via the iPhone.

There are many benefits to having an Apple Watch as your primary fitness watch.

An Apple Watch acts like a small extension to your iPhone. Many iPhone apps come with accompanying Watch apps: for example, you can choose to see Whatsapp message previews on your Watch

The good news for runners is that the Apple Watch is compatible with most run and activity tracking platforms.

It comes with Apple’s proprietary health-tracking functions (which includes running), but allows you – via your iPhone – to add other apps.

For me, that’s Strava.

Strava works extremely well on the Apple Watch 3 – its simple, pared-down design makes it easy to use.

And once you complete a workout, it automatically uploads to Strava – as long as you’re within range of your iPhone.

Next, the watch is excellent for anyone who needs or wants to keep an eye on their heart rate. It features a wrist-based HR monitor.

The watch will buzz and alert you if your heart rate has significantly fluctuated multiple times in 10 minutes. This alert can also follow you into your workouts if you do not wish to wear a chest strap to track your heartbeat.

Another great thing about the Series 3 Apple Watch is that the watch is water-resistant and can withstand water in depths up to 50 meters (about 164 feet).

Thus the watch can easily transition from your swims in the lap pool to scuba diving on vacation and all the showers in between (if you want the perfect tracking of your steps throughout the day).

As well as tracking specific workouts, the Apple Watch 3 monitors your activity throughout the day – and automatically logs your standing hours, your active time (movement), and your exercise time.

These metrics are displayed in 3 rings, which I always find to be a nice little motivating nudge for me to move every day and ‘complete my rings’.

Music on the Apple Watch

The watch can also pair with subscription-based music apps, like Apple Music, Spotify, Soundcloud, and more.

It’s relatively easy to use the watch to scroll through your music library and change playlists mid-workout.

However, even though the watch is great, it is not perfect, and I will explain my biggest issues with my experience using the Series 3 Apple Watch.

My Experience: The Good, The Bad, and The Ugly

I’ve used the same Series 3 Apple Watch for nearly four years. Let’s just say my watch has been through the wringer.

If I did not need to take the watch off to charge, I would leave it on. Even though it is a great watch and would be great for anyone who wanted another device on their arm, I always had two complaints:

I don’t particularly appreciate needing to charge the watch every night (obviously similar to the iPhone).

If I did a long training session or switched my workouts multiple times in one session, my battery would drain and sometimes not make it through the day.

I have heard from other people who would compete in races with their watches, and the watch would die before the race was completed.

The short battery life was one reason that pushed me to invest in a nicer watch catered to fitness.

When new, the Apple Watch 3 should last for 18 hours of battery life when performing regular activities, including a workout.

Marathon Handbook editor Thomas Watson ran a marathon with a brand-new Apple Watch 3, and after 4 hours of run tracking, the battery was still at 78% (was at full charge at the start line).

So the battery life is fine for anything up to marathon distance – just remember that you’ll have to charge it every night.

The other reason I was not the biggest fan of the Apple Watch was that I would begin a run right next to a friend or family member, and our watches would start at the exact second.

We would stay at the same speed next to each other, but our distances would be off by the end of the run.

I had multiple instances where my watch would be an entire one-tenth mile (161 meters) behind or in front of the other person’s watch.

Now I know these are not the most significant deterrents to why someone should or should not purchase a Series 3 Apple Watch.

Still, I find that they are essential in deciding to spend your hard-earned money on a high-quality watch that you can track your runs or other workouts with.

I wholeheartedly believe that the Series 3 Apple Watch can be an excellent investment and a versatile watch to give someone exactly what they are looking for.

As the watch is water-resistant, can track workouts with GPS, can text/call, play music, pay for your pre-run coffee, unlock your phone or computer, keep an eye on your heart rate, and so many other things, it is a great watch for many people looking for a smart fitness watch.

It looks great, and the function is generally incredible. Of course, no watch will be perfect, but this is a great place to start for the athlete looking for a little bit of everything.

Mikaela Baker is an avid athlete and fitness enthusiast. After two knee surgeries in 2017, she shifted her focus from dance to other means of exercise and found joy in running, hiking, and weight training. She lives in New York City and spends her days running through Central Park and right next to the East River!