I picked up an Apple Watch a few weeks ago, and have been training with it since – culminating with a marathon last Sunday.   Here are my thoughts on how it weighs up as a runner’s watch, and how I’m getting on with it in general.

I bought the Apple Watch 3 – Nike+ edition around four weeks ago on a bit of a whim.   I’d never worn a full-blown health tracker before, I’d only used (normally very basic) GPS watches for my run training.   But, I’m a big fan of Apple – and was getting more and more drawn to the Apple Watch when they started to include features like complete waterproofing and a built-in heart rate monitor.  Heart rate has always been something I’ve been keen to monitor, but I don’t really care for wearing a chest strap all the time – so this is a great innovation.

So anyway, I was intrigued.   This watch links directly to my iPhone and talks to it a lot.   I’m someone who gets annoyed easily when I feel like devices are being too intrusive, so I was interested to see how I’d get on with it.

I’ve done 10 runs with it now – including a full marathon last weekend.

So, here’s my thoughts on the Apple Watch series 3: Nike+ edition…

OK first of all, how is it for tracking your runs?

Despite the product’s affiliation with Nike, I’ve actually been using the STRAVA app.

(note:  I did try to use the Nike app several times, but have been having access issues – years ago I used Nike’s running app and they seem to have a ghost account still open for me, which stops me from using the latest Nike+ app). 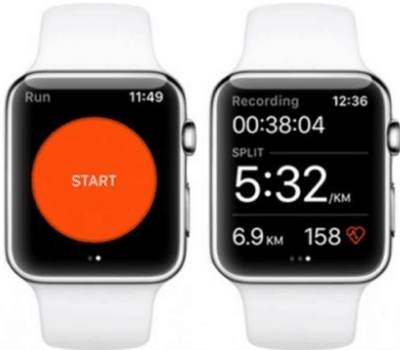 Left – the single ‘START’ button you see when you open the STRAVA app on your Apple Watch
Right – the standard display while running.   Shows (from top to bottom): current time, time spent running, pace, distance covered and current heart rate.

STRAVA is great – it’s very easy to use and has a bunch of cool features.  What’s more, the majority of my running friends already use it, so I am tapping into a community of pals.

The Apple Watch automatically syncs your runs to your profile, meaning no cumbersome uploading after each run.

How Is The GPS?

How does the Apple Watch GPS actually perform?

Well…its OK.  But in my experience so far, it is lacking a little.

My problem is that when I want to check my pace while running, the speed it reports is sometimes a little wonky.   I’d estimate that around 1/3 of the time, the speed is just way off – I run at a fairly consistent speed, and at times the watch was saying the opposite. After a couple of seconds, it does calibrate, however.

For example, in my marathon, I was running at around 5:40-5:55min/km throughout.   But sometimes when I would glance at the GPS, it would fire up a number like “4:15”, or “7:20”.   (Note that the Apple watch face is normally blank, and it uses accelerometers to detect when you flick your wrist to move your watch up to face you and turns on the screen.)   It is in this first movement that the speed on the watch is clearly wrong.   This might actually be a STRAVA issue as opposed to an Apple issue. But give it a second or two and it will give a much more accurate reading.

This might sound like a disaster for a running watch, but when I check out the data afterward it is fine – Apple or STRAVA must apply some ‘smoothing out’ to the raw data.   So when I look at the final data afterward in Strava, it looks great – the pace is consistent, and the actual path I took looks pretty accurate (within 2m or so all the time).

The pace data from my marathon shows a consistent pace when averaged over kilometres.  Still, the spiking ‘instantaneous’ readings I got while racing made it hard to gauge my speed while on the move. 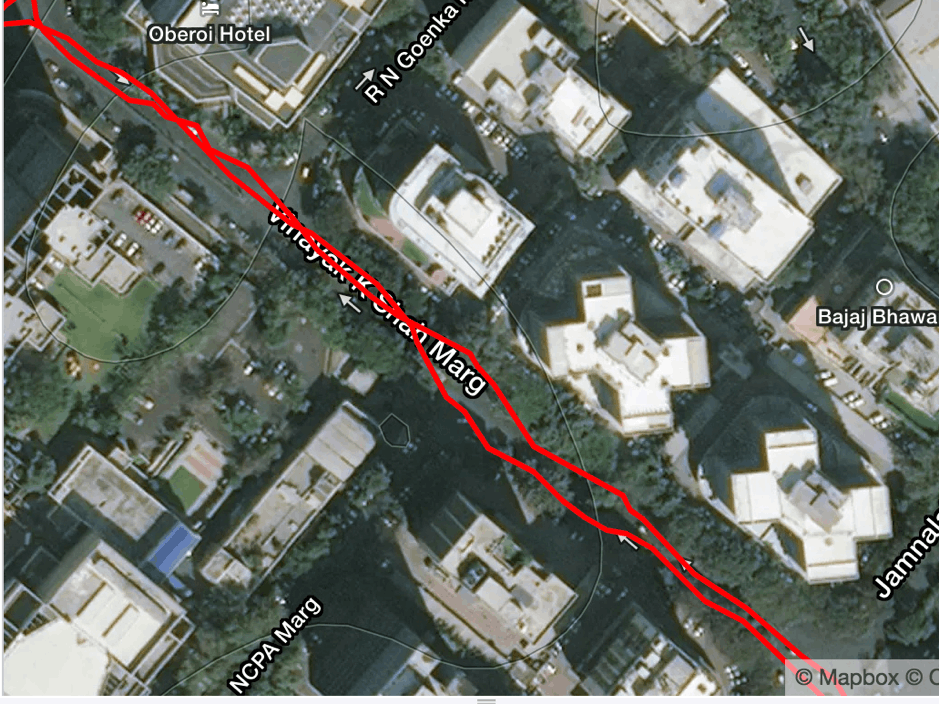 Here is the most inaccurate location data I could find from my marathon – I ran down a road and back up the other side, with a 2ft barrier in the middle.   As you can see, these lines cross slightly for a section – but only a little.   Not bad at all.

OK, so when using the STRAVA app at least, the reported speed can be a bit wobbly, but overall it records good data.   What else is there to note about the Apple Watch 3: Nike+ Edition?

I’m really enjoying having something that passively monitors my activity for me.  The out-of-the-box configuration is pretty good – the Watch monitors three parameters, and has suggested goals for each day. Your progress is tracked with different coloured rings, which complete when you reach the daily target.

The three parameters are:

Move – an estimation of the calories you’ve burned each day;

Exercise – the amount of time your heart rate has been above the ‘resting’ zone;

Stand – the number of hours you have been active/sedentary.  In other words, if you sit at your desk for over an hour, it will log one hour of no motion.   The Apple Watch pings you to remind you when you’ve been sitting for too long – this is pretty cool, a little reminder to move around and go and make a cup of tea. 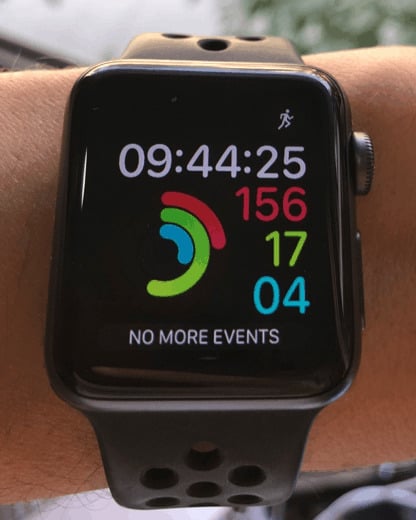 This is data I really like – by constantly monitoring your heart rate in a non-obtrusive manner, your Apple Watch helps you build up a great picture of your long-term heart activity and average heart rates. 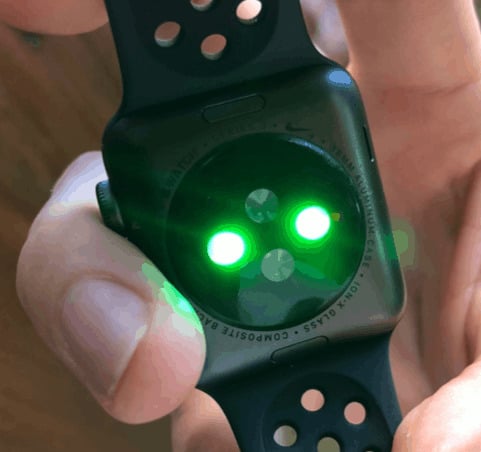 The green LEDs at the back of the watch help the built-in sensors to detect slight changes in the colour of your veins, indicating a heartbeat. 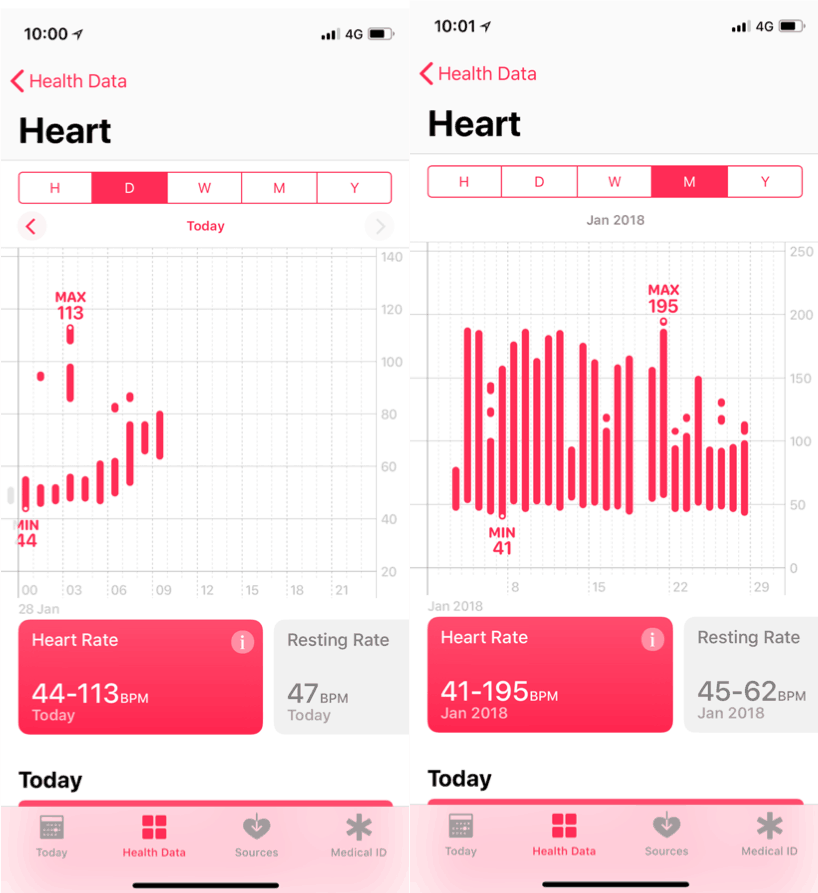 The heart rate data from my iPhone.  First screenshot shows the daily tracker, while the second shows the data over a month.

OK, a major point for any runner’s watch is the battery life – how does it hold up?

The good news is that the Apple Watch battery is plenty big enough for running a marathon or more.   I started my marathon with it fully charged, and 4hrs and 14 minutes later the battery was at 74%.   Granted, it’s a brand new watch – so we’ll see how the battery holds up over time.

I tend to find that in day-to-day life that the battery will last around 36hrs before needing a charge – I can normally put the watch on in the morning, and keep it on until the following evening before its ready to power down.   So typically I charge it every other night.   I quite like sleeping with the Apple Watch now and again to get some data on my heart rate when I’m in the depths of a good slumber!

So – to date, I’ve been impressed with the battery life.  But like most techy products, I wouldn’t be surprised if this gradually degrades.

Notifications.   The Apple Watch does notify you when you receive messages or phone calls on your phone – these notifications can easily be turned off, however.   To date, I’ve left them on and honestly haven’t found them to be intrusive.   I’m the type of guy who often misses phone calls because his phone is in his backpack or whatever, so this has actually been a positive feature.

Lack of podcasts.  Yes, you can use Apple Music with your Apple Watch, to listen to music as you run (through Bluetooth headphones, and without an iPhone nearby).   However, as yet Apple hasn’t introduced a feature to listen to podcasts as you run – which is one of my favourite ways of passing the time on long runs.   I have discovered this workaround which is a little bit cumbersome and is very slow – so takes some planning and thought.

Totally waterproof.   This is a great feature, not related to running but worth mentioning.  You don’t have to worry about your Apple Watch (series 3) when you go for a shower.   I’m looking forward to trying out the Apple Watch in the pool and surfing too, just to see how it holds up and what kind of analysis it can provide.

The Apple Watch Series 3: Nike+ edition is a super fun, exquisitely-designed engaging watch with features that will delight you.   As a runner, its instantaneous GPS data can sometimes be misleading at first glance, but it does calibrate itself if you persist with it – and the end of run data is of good quality.  The killer features of a built-in heart rate monitor, full waterproofing and automatic activity syncing – while not unique to this watch – make it a great all-around activity tracker watch that runners can enjoy.

We share our unbiased, informed opinions on gear and are never influenced by brands.

We may earn an affiliate commission if you buy through our links. More here!