Running shoes are a major focus for most runners.

It makes sense—running shoes are really the only required running gear, and how your running shoes feel, fit, cushion, and support your foot while you run can significantly impact how you feel while you run and your risk of injuries.

The fit of a running shoe is particularly important, and knowing how to lace your running shoes properly can aid in achieving that perfect fit.

If a running shoe is too tight, it will not only be uncomfortable, but the compression can also squeeze the ball of your foot, increasing the risk of metatarsalgia, a Morton’s neuroma, or even the development of a bunion.

If a running shoe is too loose, it not only increases the risk of tripping but also can cause blisters due to excessive movement and sliding of the foot inside the shoe.

Different running shoe lacing patterns help you fine-tune the fit of your shoes, helping relieve pressure in sensitive areas and providing added support and compression in areas that need more of a squeeze.

This article will discuss the benefits of trying different lacing patterns for running shoes and a bunch of shoelace patterns to test out.

A running shoe lacing pattern refers to the way in which you thread the laces through the eyelets of your running shoes.

The running shoe lace pattern that comes standard in most running shoes is the basic criss-cross lacing pattern in which the right and left laces cross over one another and zig-zig up the line of eyelets from the toe up towards your ankle.

The cross-cross lacing shoe pattern for running shoes works pretty well for many runners, but there are times that a running shoe might feel pretty comfortable overall, but you experience issues like heel slippage or blisters.

Changing the way you lace the shoes can adjust the tension and fit of the upper portion of the shoe, providing a snugger hug of your foot when the running shoe feels too loose or giving more breathing room when your running shoes feel like they’re choking your foot.

Common running shoe issues that can potentially be remedied by adjusting your shoelace pattern include the following:

It’s important to note that while you can lace your running shoes differently can potentially prevent or fix common running shoe issues; there’s only so much change you can get to the fit of your shoes by changing how you lace them.

If the running shoe is too small or too big for your foot, or the shape of the shoe doesn’t match the shape of your foot well (too narrow, too wide, tapered toe box if you have a broad foot splay, etc.), just re-lacing your shoes with a different shoe lace pattern is unlikely to have enough of an impact to make the shoes fit.

What Is the Best Way to Lace Your Running Shoes?

So, are all shoe lacing patterns equal, or is there a best way to lace your running shoes?

A review of 63 studies looked at the effect of various factors of running shoes on biomechanics, comfort, and injury risk in runners.

One of the included studies investigated the impact of shoelace patterns on running gait and biomechanics. 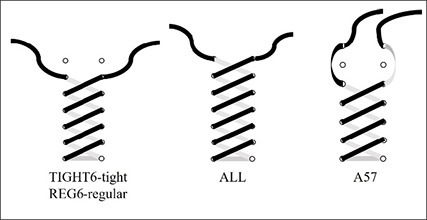 Interestingly, the performance level of the runner had a significant impact on the running shoe lacing pattern perceived to be most comfortable.

Slower runners found the A57 condition (the one where the laces were pulled from the outside from the fifth to the seventh eyelet, skipping the sixth eyelet) to provide better stability and comfort.

In contrast, faster runners did not like this shoe lacing pattern, and they had a higher tolerance for the standard cross-cross pattern with a regular amount of tightness.

The lacing style with every eyelet used up to the ankle was not preferred by any runners.

Interestingly, although runners may not always find the seven-eyelet criss-cross lacing pattern where every eyelet is used to be most comfortable, there is evidence to suggest that using the last eyelet improves the stability of the shoe and reduces the plantar pressures on the foot.

One study found that lacing every eyelet rather than just making the normal lacing pattern with six eyelets (leaving the last one by the ankles open) reduces loading rates of the foot and reduces peak heel impact forces relative to skipping this last eyelet.

In that study, runners did not find that the comfort of the running shoes was compromised by lacing every eyelet, and the researchers concluded that this could be an effective means of reducing the risk of injury since loading rates and peak impact forces are significantly reduced.

Runners in this study were also experienced runners who ran with a heel-striking running gait.

Another study looked at the effects of different shoe lacing patterns on pressures on the sole of the foot during running, perceived comfort, and subjective ratings of shoe stability.

For all trials, runners wore the same running shoe (Nike Air Pegasus), but there were 6 different lacing patterns used in a random order for each runner.

The lacing patterns varied in the number of laced eyelets as well as the tightness, with three different tightness levels used for the basic criss-cross lacing pattern.

So, essentially, there were 4 different lacing patterns:

The image of these shoe patterns can be seen below: 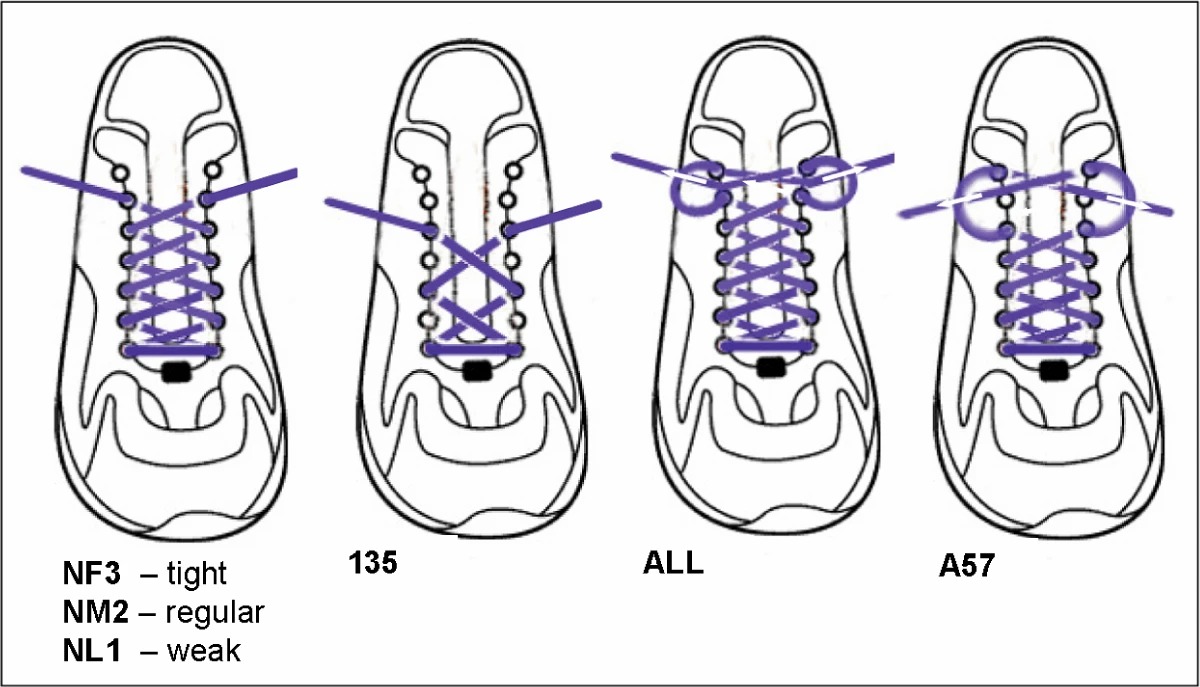 Runners found the tight version of the basic criss-cross pattern (NF3) and the seven-eyelet pattern (ALL) to be the most stable lacing patterns.

Pressures on the top of the foot by the extensor tendons and tarsal bones were lowest in the lacing pattern that only used three eyelets (135) and the loose version of the basic criss-cross pattern.

The seven-eyelet lacing pattern (ALL) resulted in the highest pressures on the sole of the foot.

The shoes laced tightly reduced the velocity of pronation of the foot at heel strike and reduced the impact loading rates.

There are notable findings because both of these factors can independently affect injury risk.

In particular, reducing impact loading rates can significantly reduce the risk of injury because it spreads out the time of force application, lowering the peak shock.

In contrast, the researchers found that shoe lacing patterns that were looser or used fewer eyelets increased the velocity of pronation and ground contact and increased impact loading rates.

How To Lace Your Running Shoes: 4 Different Ways

While the research shows that certain lacing patterns may be better than others, the best way to lace your running shoes for you is whatever way feels most comfortable to you.

Here are some different ways to lace your running shoes based on different foot issues:

Lace your shoes with the normal criss-cross pattern, but skip the second to last eyelet.

Instead, thread the lace through the last eyelet next to your ankle so the lace comes in towards the shoe, forming a loop with the last two eyelets.

Then, cross your laces over one another and thread them through the loops you just formed before you tie them off like normal. 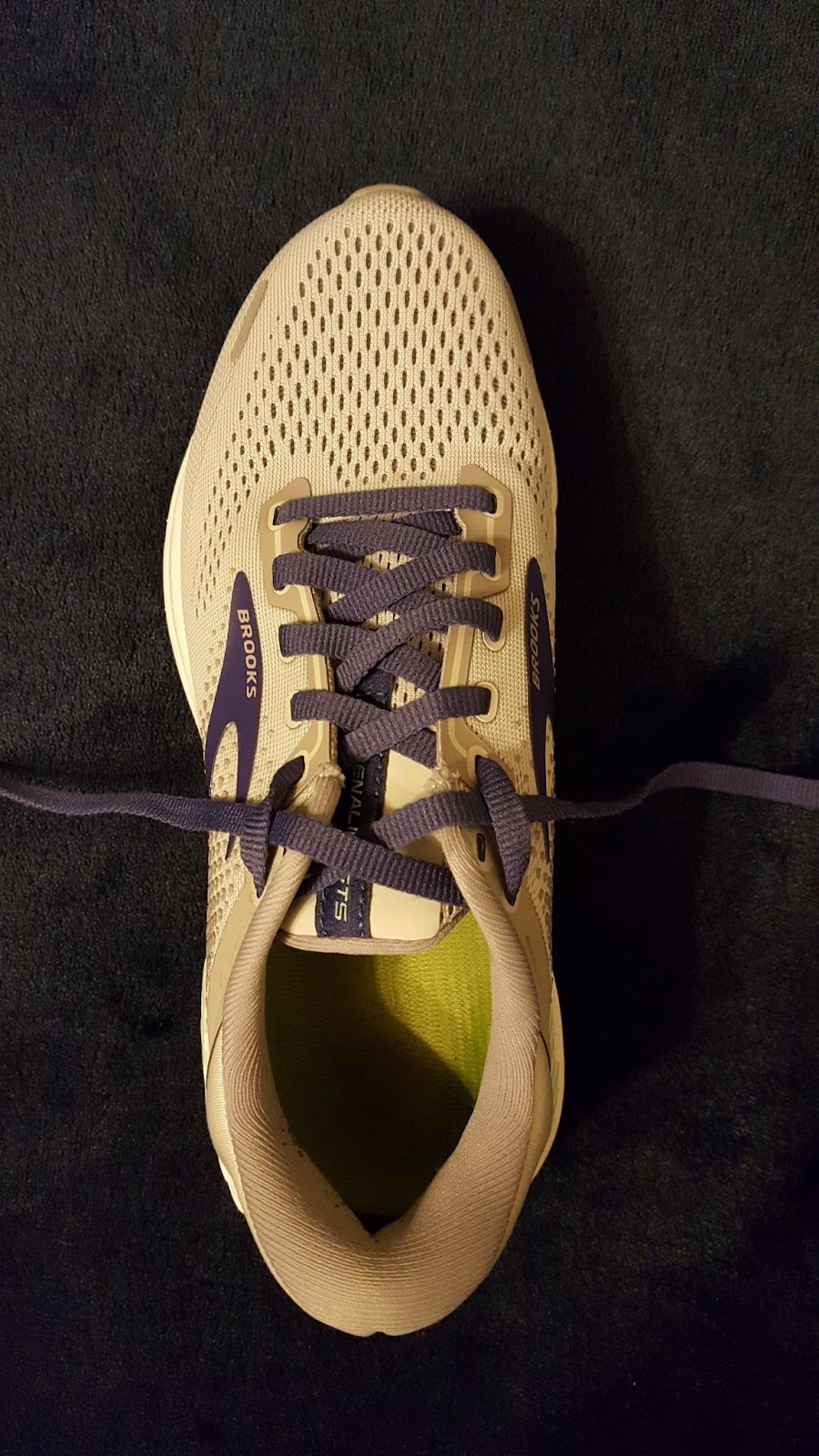 Ladder lacing is also sometimes called “Lydiard lacing” after the running coach, Arthur Lydiard, who championed its use in some of the books he wrote in the 1960s and 1979s.

Like a ladder, this shoe lacing pattern involves lacing straight across from eyelet to eyelet with one lace, in an alternating fashion, rather than crisscrossing and threading the lace up the side of the eyelets to decrease pressure.

The ladder lacing shoe lace pattern is said to reduce pressure on the top of the foot because the laces don’t cut across the metatarsals at a diagonal.

Start your laces normally, criss-crossing for the first two holes.

Then, stay inside the shoe and keep the laces parallel on the side of the shoe rather than crossing over the foot.

Criss-cross through the final two or three eyelets like usual.

Start your laces normally, but for the second hole, stay inside the shoe and keep the laces parallel on the side of the shoe rather than crossing over the foot.

In short, experimenting with running shoe lacing patterns can be a useful tool for fine-tuning your shoe fit, but it’s not a magic cure-all.

Amber Sayer
Amber Sayer is a Fitness, Nutrition, and Wellness Writer and Editor, and contributes to several fitness, health, and running websites and publications. She holds two Masters Degrees—one in Exercise Science and one in Prosthetics and Orthotics. As a Certified Personal Trainer and running coach for 12 years, Amber enjoys staying active and helping others do so as well. In her free time, she likes running, cycling, cooking, and tackling any type of puzzle.