In this guest post, Tim Hopkin shares the story of his first 100km event, the Thames Path Challenge; including how he hit ‘The Wall’ after 18km!

Firstly, apologies for what may be a slightly clickbaity title. But if ‘the wall’ is the point in your run when you feel physically and mentally at your lowest, when you find yourself thinking “There’s no way I can do this”, then for me it came about 90 minutes into what would become a 14-hour day. But before we get there, let’s take a few steps back. 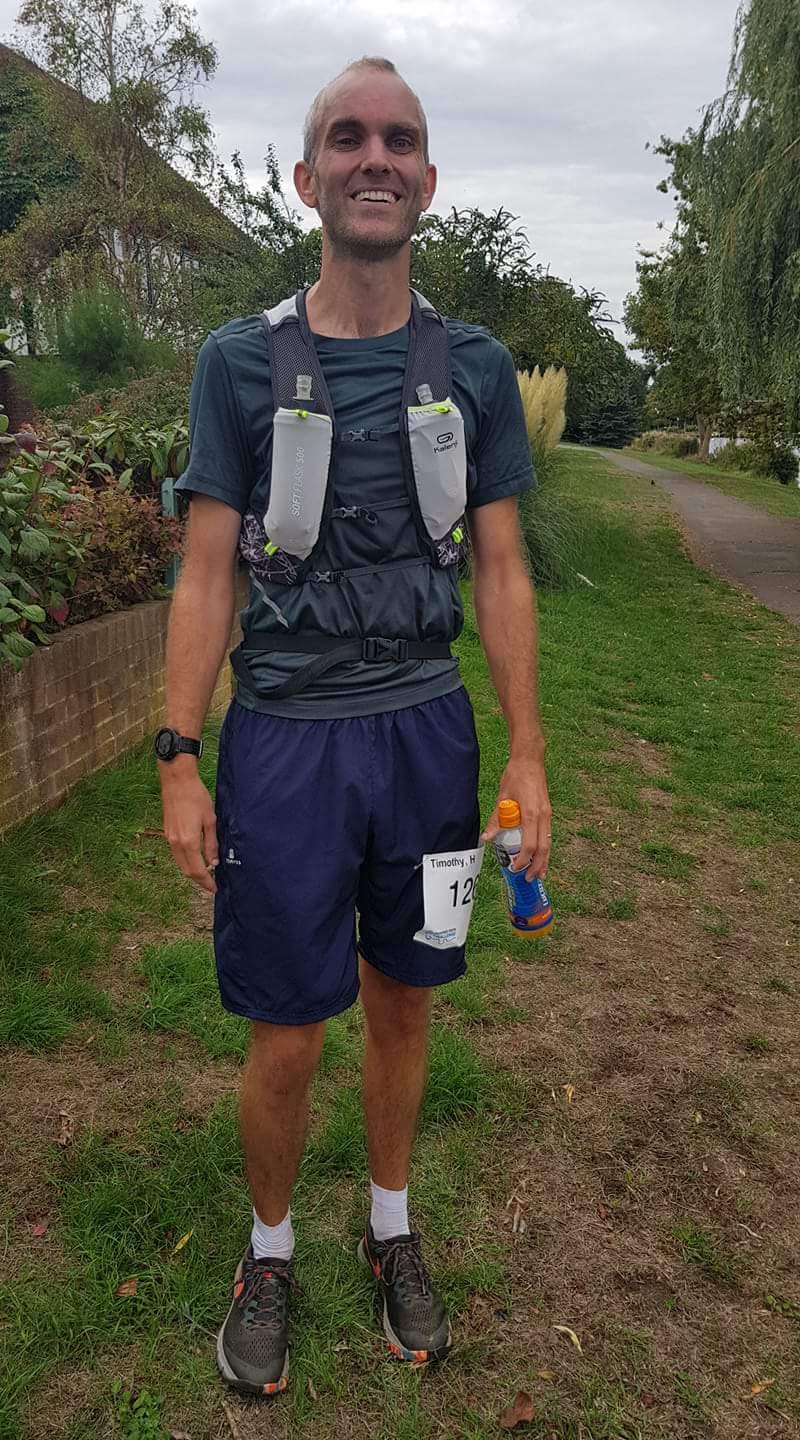 My route to the Thames Path Challenge 100km

It was probably around six or seven years ago when, while passing over the Thames in my hometown of Staines on a Saturday in early September, I noticed several people in running kit, wearing race numbers, most with small backpacks crossing the bridge in the opposite direction.

Some cursory Googling led me to the conclusion that they were running the Thames Path Challenge, an event that consists of several distances for both runners and walkers, the most extreme of which is an Ultramarathon that starts in Putney in London, and ends in Henley-on-Thames, some sixty-two miles later (I did very little regular exercise at his point, so hadn’t yet converted myself from imperial to metric!).

Fast-forward a few years and, – as I realize I’m definitely not in my twenties anymore – I find myself, as many do, indulging in athletic activities, (that if nothing else, keep me out of trouble).

So, with a couple of RideLondons, a half-marathon, a Sprint distance triathlon and (once I realized I was definitely not a swimmer) a pair of duathlons under my belt, I was looking for my next challenge. A marathon didn’t appeal that much to me (I’d bet the phrase “well, EVERYBODY runs marathons these days” has been spoken by many people who sign up to do ultras) and I recalled that day when I saw those people running across the bridge.

At this point, the furthest I’d ever run was about 30km (I now worked in metric, like all reasonable people do, don’t @ me), which is obviously a world away from a 100km ultra. 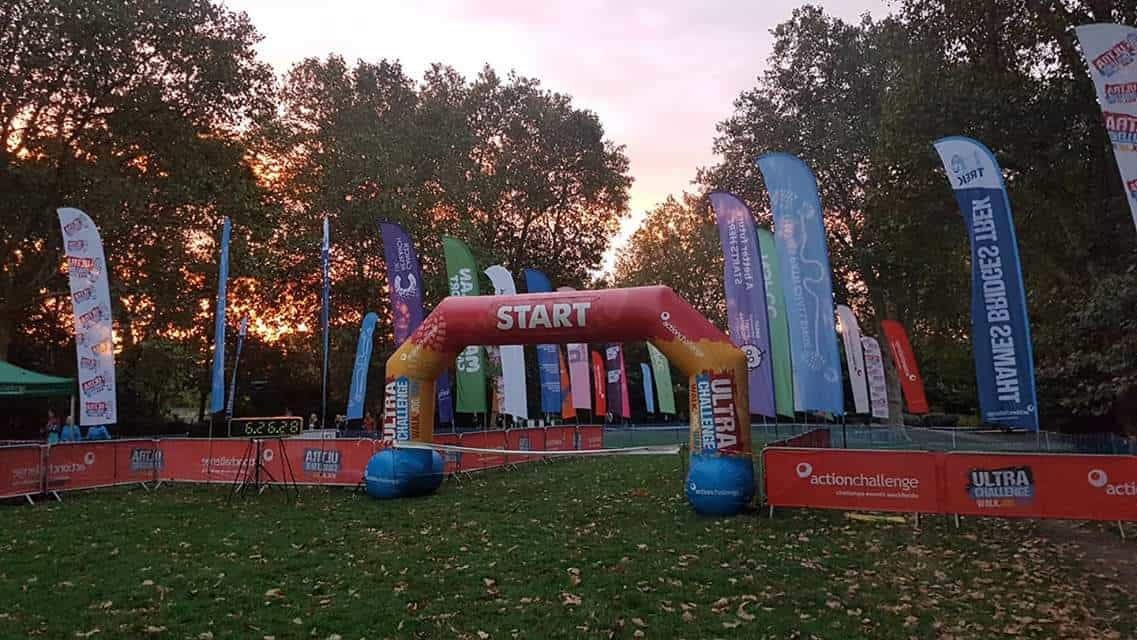 My 100km training and preparation

So I did my research, found, adapted and commenced the ultramarathon training plan from Marathon Handbook. Once my long runs reached 50km I told myself I could probably do the whole thing, even if I ended up crawling the second 50km, and I signed myself up.

So, back to the day itself. My training had gone well (even though I’d skimped on the strength training more than I should have) with my longest training run being 71km, I’d stayed completely injury-free, and even blister-free in the superb pair of hybrid road/trail shoes I’d bought a few months earlier (shoutout to Sweatshop in Teddington ).

I have a plan, to stick to a certain pace for each segment between the rest stops, which came roughly every 1/8th of the distance along the route, throwing in a 5-minute walk halfway between each of the stops (walking in an ultra is definitely ok, the internet says so). 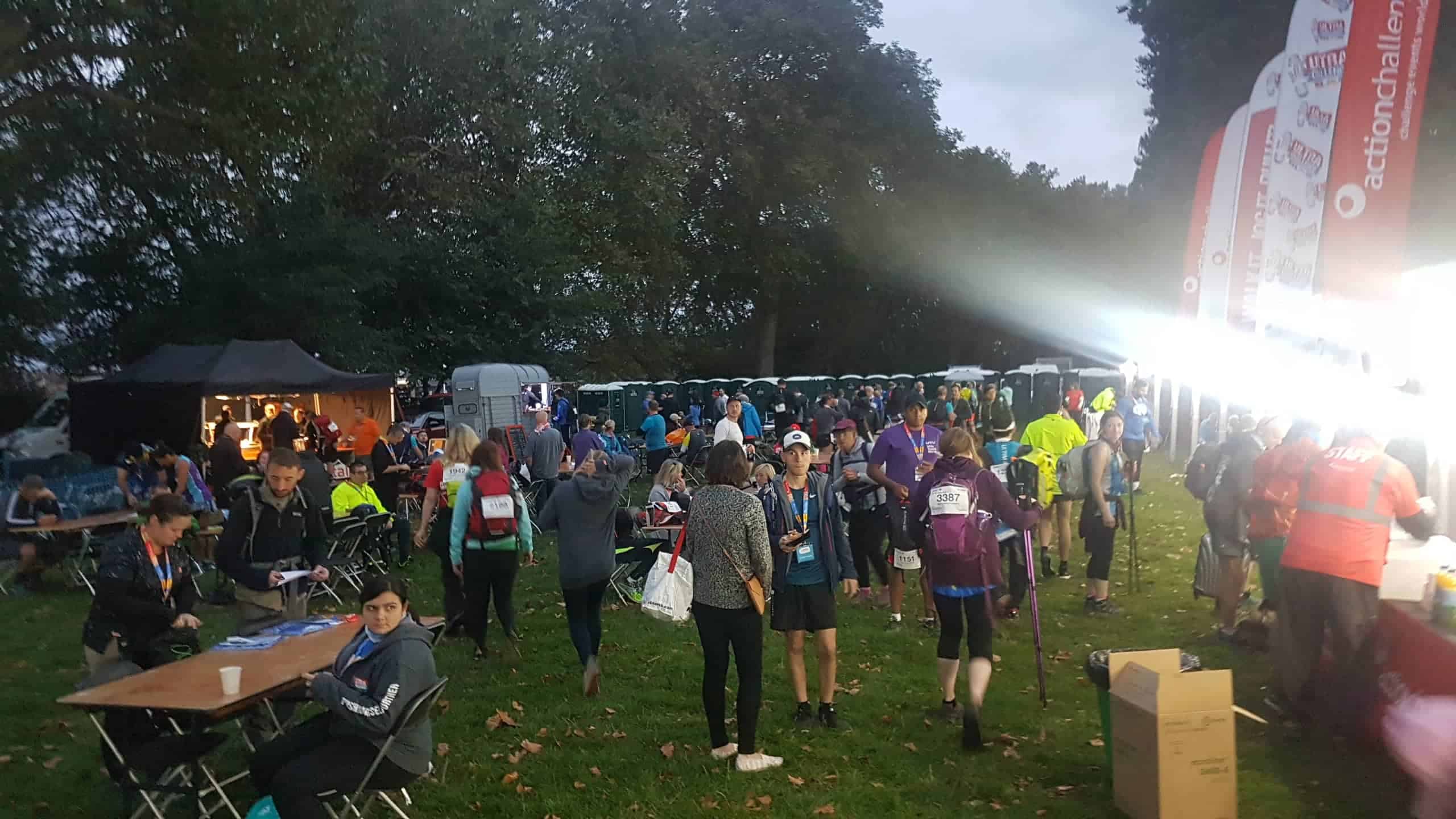 And off we go. I make it to the first rest stop at 14km entirely uneventfully, I’m a few seconds inside my target pace and feeling ok. I top up my water and energy drink, grab some nuts and sweets, take a toilet break and get going again.

Hitting The Wall at 18km

Well, this brings me, as you may well have guessed, to the headline of this piece. A few kilometres after the first rest stop and I’m hit with sudden nausea that literally stops me in my tracks. I don’t even make a conscious decision to walk instead of run, my legs just do it. I walk for a few minutes in a bit of a daze. Fellow runners ask me if I’m ok as they pass, “yeah, fine!” I lie.

I continue walking and now my mind is consumed with thoughts such as “Well, if this is how I feel now, there’s absolutely no way I’m getting through this whole thing”, “It’s only going to get worse from here” and other such self-helpful motivational internal speeches.

But I keep on walking.

And as I walk I manage (warning, don’t let your Grandma read this bit) to expel some excess air through various parts of my body and the nausea lifts slightly, at least enough for me to start running again.

I regroup. I still feel bad, but not as bad as I did, and that’s a good thing.

“Right, start the brain going, what are we doing? How are we getting through this? What just happened?”

“It must have been that energy drink I topped up with at the rest stop. It’s not what I usually have. That MUST have been it. Anyway, where are we?”

I know my support crew (in the form of my wife) is waiting at Kingston Bridge.

“That’s about another 3km, let’s just focus on getting there”

Get there I do, and it’s so good to see her. I tip out the energy drink I’m carrying and replace it with the one she’s got with her. My usual one. The ‘proper’ one! She gives me a couple of gels and a little pep-talk (“Don’t worry so much about your plan, just concentrate on keeping moving, if you need to slow down, then slow down”). 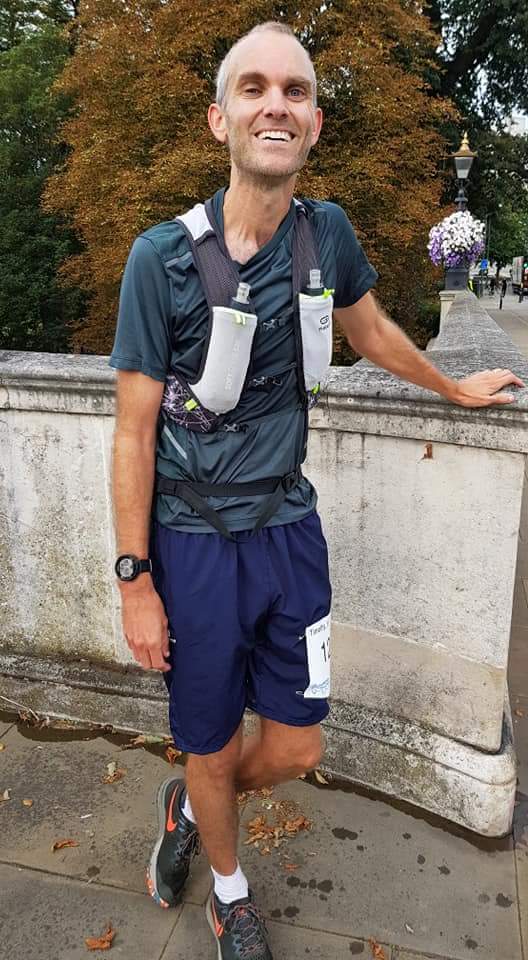 I carry on. It takes probably another 10km, well over an hour at the pace I’m now traveling, until I feel anything close to normal. But I get there gradually, from adequate, to relatively fine, then feeling back to where I’d want to be by the time I hit a marathon just after 42km.

The 9km or so from this point to the mid-way rest stop coincides with the route going through my ‘ends’ (as I believe the kids say) and a good number of friends and family members have come out to cheer me on. This peps me up considerably and I reach the half-way point in good spirits.

I force myself to eat some pasta and shepherd’s pie that I don’t want (the halfway rest stop provides a hot meal for all competitors), completely change my running outfit to freshen myself up a bit, and I head off again. 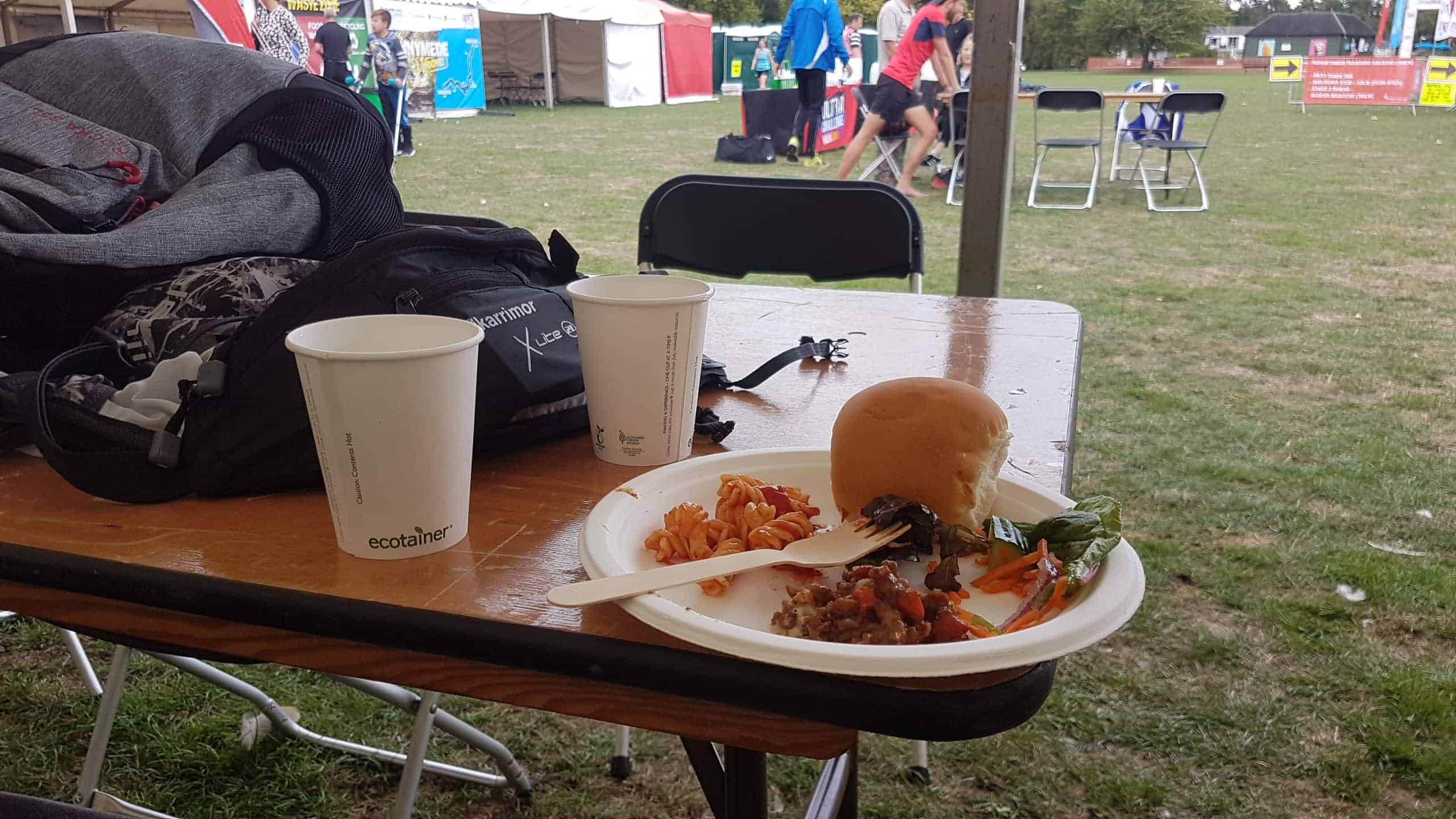 The second half is, in all honesty, fairly uneventful. I’m getting progressively more tired, that’s to be expected, but I mercifully stay injury-free, with nothing but aching muscles to complain about.

My actual ‘Wall’ (not the self-induced one I had earlier) probably comes somewhere after the 63km rest stop. From there it’s 15km to the next one (the longest gap between any of the stops on the whole route) it gets tough, but I never feel like I’m not going to carry on. I’m hugely grateful when my older brother meets me at 72km and paces me on to the 78km stop.

While here I avail myself of a free massage, which is an entirely new experience (Masseur: “Is that muscle particularly tight, you’re tensing up when I work it?” Me: “No it’s fine, it just really hurts when you do it so hard!”) but one I was very grateful for, as it definitely makes a difference. By the time I head out again dusk is definitely on the horizon and there’s a distinct chill in the air.

I meet my wife (this time with our children in tow) again at around 84km. She gives me a change of socks, the head torch I’d forgotten to bring with me at halfway, and I offload some of the things I’ve been carrying that I know I won’t need anymore (the cap and sunglasses that I’d been carrying all day but hadn’t used once, power banks I’d used to charge my phone/running watch, etc). 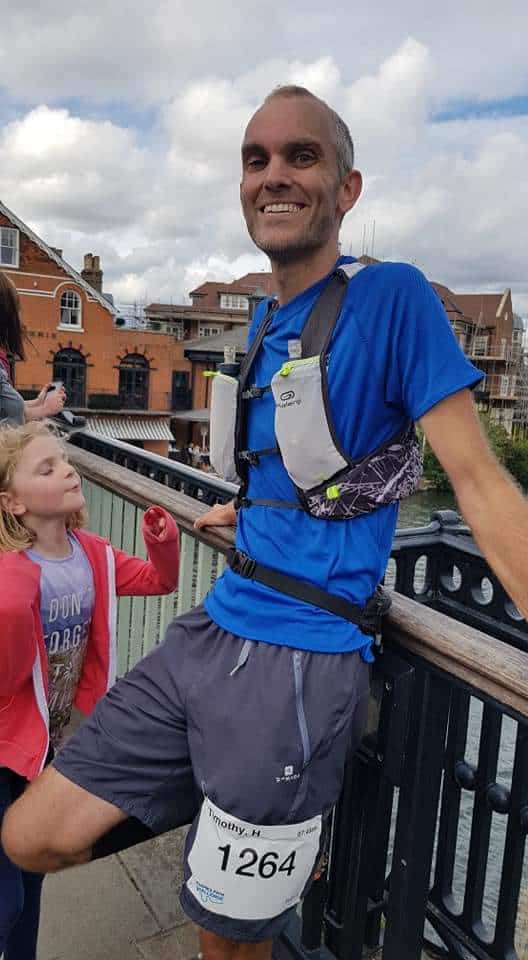 Shortly after the 88km rest stop, the head torch becomes necessary. I’m running through fields now and a new challenge presents itself in the form of trying to avoid the more uneven patches of ground. Eventually, the fields gave way to paved surfaces as I hit the last few kilometres of towpath on the outskirts of Henley.

As I approach the finishing line I note that my watch has only just ticked over 98km, probably because of me not restarting it soon enough after leaving a few of the rest stops. Before this thing started I had told my wife that if I got to the end and my watch hadn’t reached 100km I’d double back until it reached the magic number.

In reality, I was just too tired and too keen to get it over with to be that bothered. If I’d been at 99.5km then maybe I’d have considered it, but I was going to endure 15 minutes of running (I was going pretty slow by this point) just for the sake of it.

Along with some family members who had come to the finish I also noticed non-runners who I’d kept spotting throughout the day each in their own ‘support crew’ role for somebody. It’s true for me, and I’m sure for those other runners too that there’s no way I would have completed my 100km without people who were willing to give up an entire day just to meet me at certain points and indulge my need for clean socks, gels, ‘proper’ energy drinks and the like.

But complete it I do. I cross the line with the clock at 14hrs 18mins, a couple of hours slower than I had been planning at the start of the day, but I’m past caring. I feel no rush of euphoria as much as I do a simple satisfaction with achieving what I set out to achieve. It wasn’t classified as a ‘race’, but I finished 81st of the 260-ish who started as runners/joggers, in the top third. I was pretty pleased with that. 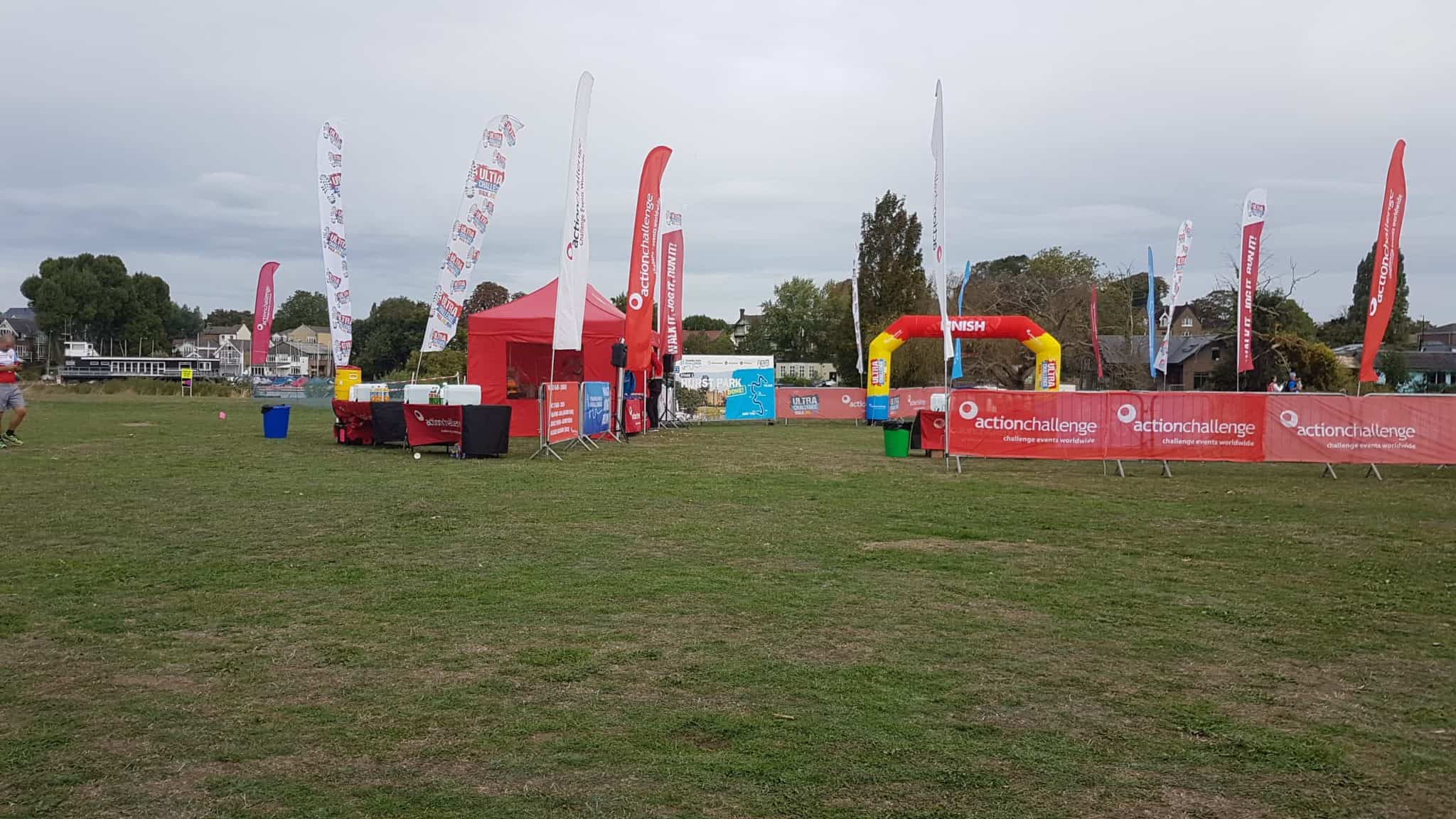 I shun the post-race meal on offer (my appetite is zero) and the queue for the complimentary massage is too long. So I just change and we head home. 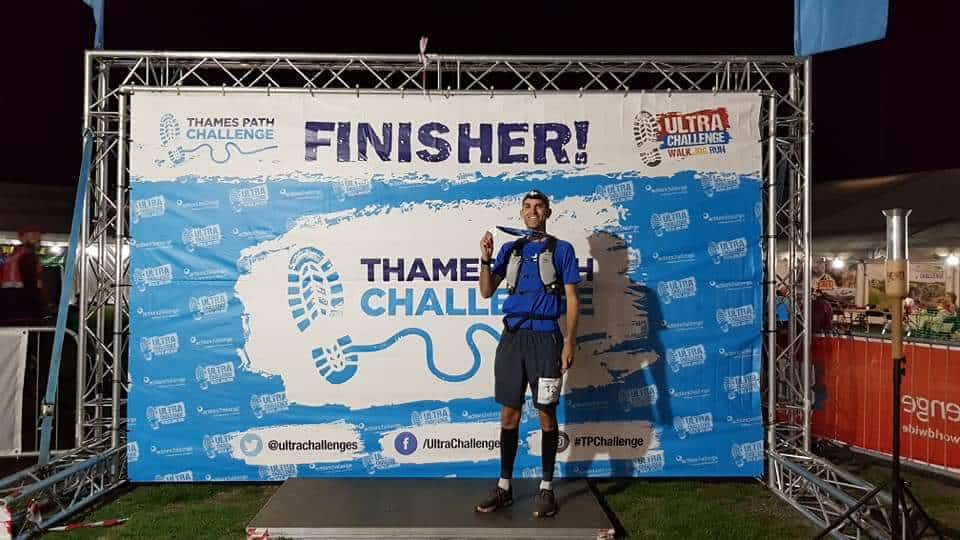 I’d highly recommend the event itself, particularly as an introduction to ultramarathons. The route is about as flat as it’s possible to get (though I suppose it’s technically all uphill as you’re running upstream!), the entry is pricey, particularly if you’re not doing it for charity, but you can see where that money goes, as the race support is top drawer.

The title of this piece refers to my ‘first’ ultra. Will I do another one? If you’d asked me in the few days following I’d have said no. But even now I find myself thinking about what I’d do differently next time, and maybe THAT’S the thing that gets you going back.

I’ve done this, how can I do it better, faster? Put in more non-running-based strength training? Definitely. Have a better feeding strategy? Maybe. Adjust your pre-race taper? Possibly. But I’ll tell you one thing I’ll do: Stay away from those unfamiliar energy drinks! 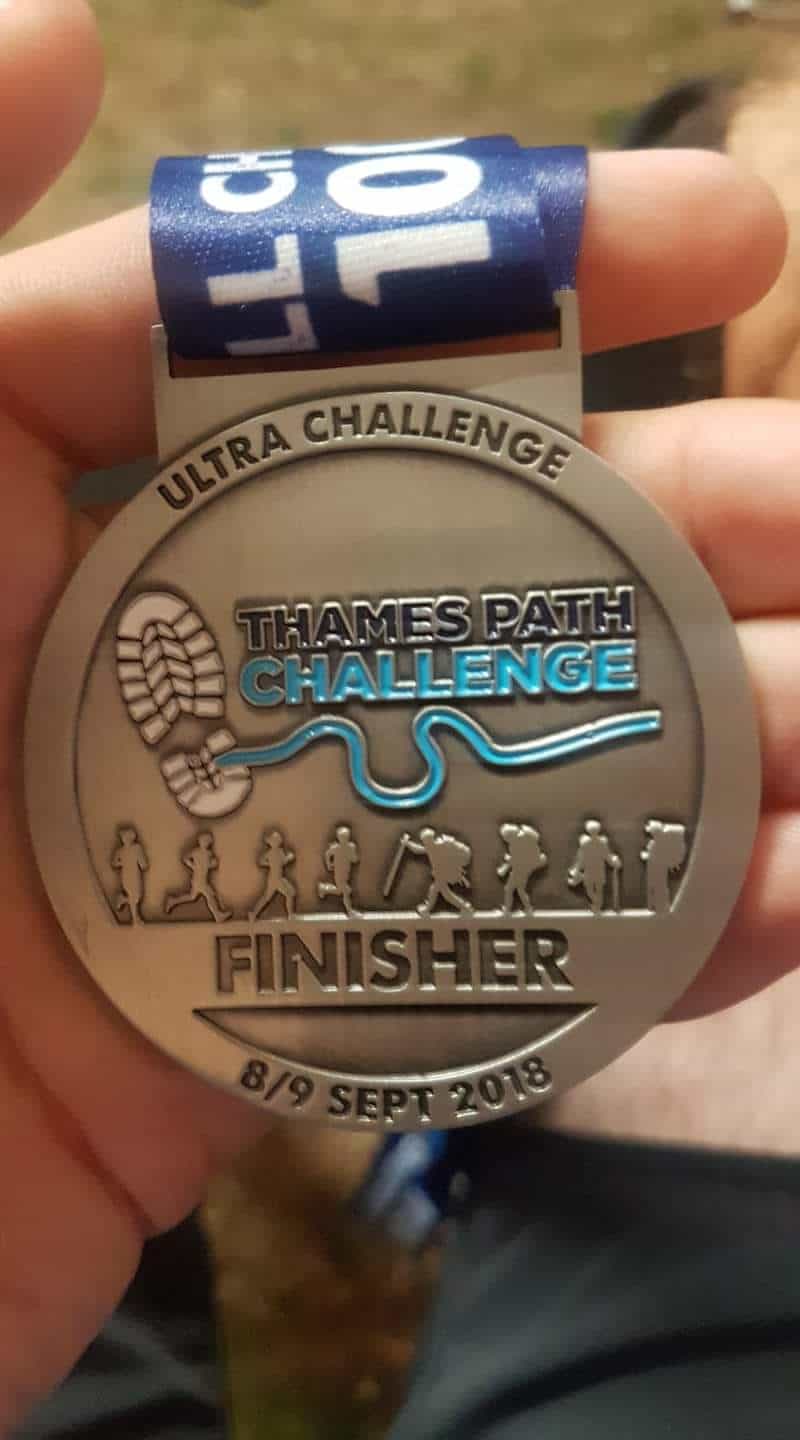