Sarah Sawyer makes no secret of the fact that she loves multi-day races, primarily because they combine two of her favourite pastimes – running and travel.

Basically, if there’s a stage race in a location she wants to visit on holiday, then she’s on the start line! When she’s not running multi-day races she runs everything from 5ks to 100-mile ultramarathons in the mountains, on trails, on the track, and on road. 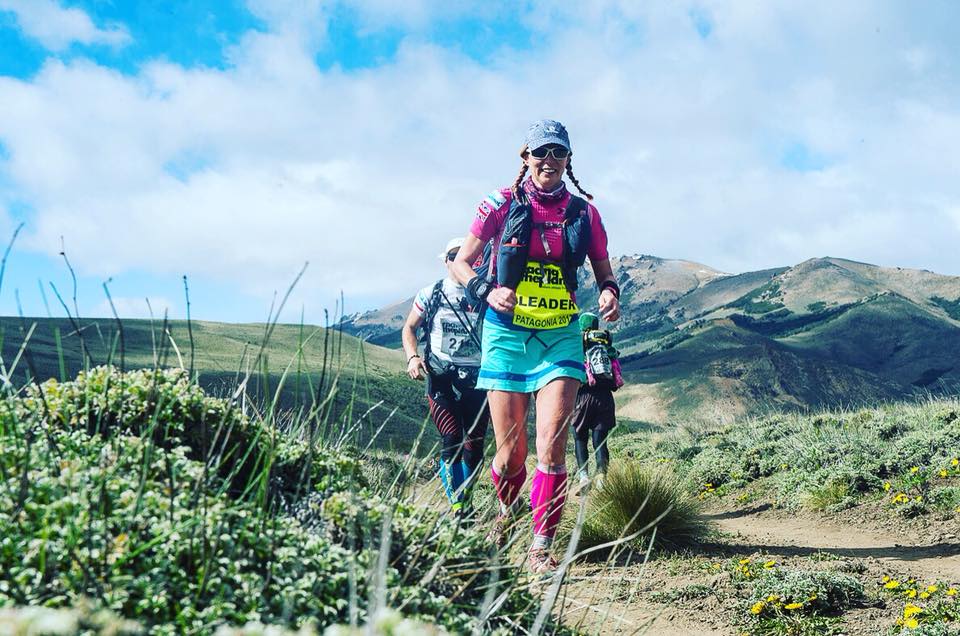 What was it about stage races that first appealed to you?

I’m embarrassed to say it was watching James Cracknell’s ‘Toughest Race on Earth’ Marathon des Sables DVD that initially seeded the idea of multi-day racing to me. I’d completed a few marathons and was just starting to dabble in ultras, and to a very amateur inexperienced runner, the idea of running the equivalent of four marathons and one ultramarathon in a week seemed almost impossible to me.

However, the seed was planted and before I knew it I was googling ‘multi-day desert races’. I initially opted for the 4 Deserts Sahara Race (which was based in Jordan the year I ran it) as I’d always wanted to visit Jordan and this race started at Wadi Rum and you ran to Petra, which was going to be some finish line! A number of people remarked that there were easier ways to see Petra (i.e. walk there from your hotel!), however, I can’t imagine there are more satisfying ways to see Petra, knowing you’ve traveled 155 miles on foot to get there!

I had nearly two years to train, so I had a lot of time to get used to the idea and prepare. In an era of materialism (of which I’m guilty of as much as anyone – I know I don’t need 24 pairs of trainers!), I loved the idea of going back to basics for a week and surviving with just what I could carry on my back. Also, I openly admit to being the most organised person in the world so I loved the planning and organising and all the lists that I got to make, that is required pre-race before you even get to the start line! 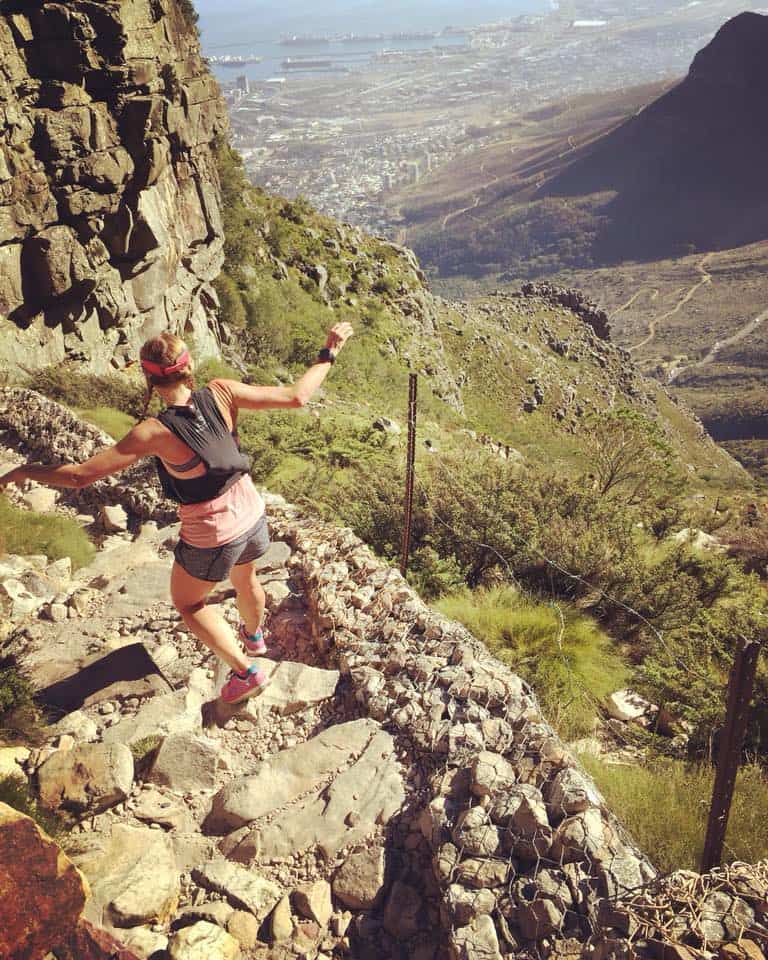 How has your preparation for stage races evolved?

I think the biggest difference in my preparation has been that I’ve gone from the mindset of being ‘completer’ to ‘competer’. For my first stage race, my starting rucksack weight was 9kg, this dropped to 8kg for Ecuador, just over 7kg for Atacama and then to an all-time low of 6.9kg for Patagonia (and this was despite there being several more items of mandatory kit for Patagonia).

For my first stage race my only goal was ‘completion’, so although I was mindful of my rucksack not weighing too much, I certainly wasn’t obsessive about the weight of it.  I took way more calories than I needed to, and I even took a change of top for camp (although I quickly realised by camp 2 that this was a pointless item and it was binned!). As I got more experience of multi-day racing, I learned exactly how many calories I need a day to be able to run well. I also use the bulk of my mandatory calorie allowance on days 1-5 and just go hungry on the rest day, as the vast majority of the running has been done by then.

I remember on my first race in Jordan waking up on the rest day and having two 800 calorie freeze-dried meals to eat, the last thing I wanted or needed! I also sought out the lightest kit where I could, so for example for Patagonia my headtorch and back-up headtorch in Patagonia had a combined weight of just 33g and my waterproof trousers which were mandatory kit weighed in at 79g. I learned that with every item of mandatory or optional kit there are ways to shave a few vital grams off it if you shop around or improvise, which will bring your total rucksack weight down. I also try and multi-purpose items where I can. So for example, I’m a huge fan of Mountain Fuel energy drinks which combine part of my daily calorie allowance alongside my mandatory electrolyte requirements.

My training has also got a lot smarter. For Jordan, I just did lots of long runs along Brighton seafront with my rucksack – hardly ideal preparation for a race in the desert! For subsequent races, I’ve tried to make sure the terrain I’m training on is more like what I’m going to be racing on, so virtually all my runs are off-road, and when I can I get to more technical terrain such as in the Brecon Beacons. Also, I still incorporate speedwork in my training; if you want to race stage races with the view to hopefully being towards the top of the field, then you do need that speed as days 1 – 4 always tend to be shorter than marathon distance.

How does Pilates compliment your ultra-running?

I’m a huge advocate of Pilates and yoga to compliment my running. I truly believe that without it, I wouldn’t be able to run the distances I do in training and racing and stay injury-free. Pilates has been so useful for strength, conditioning and for a strong core for carrying the rucksack. I use yoga to improve my flexibility and also use hot yoga if I’m going to be racing in a hot climate. 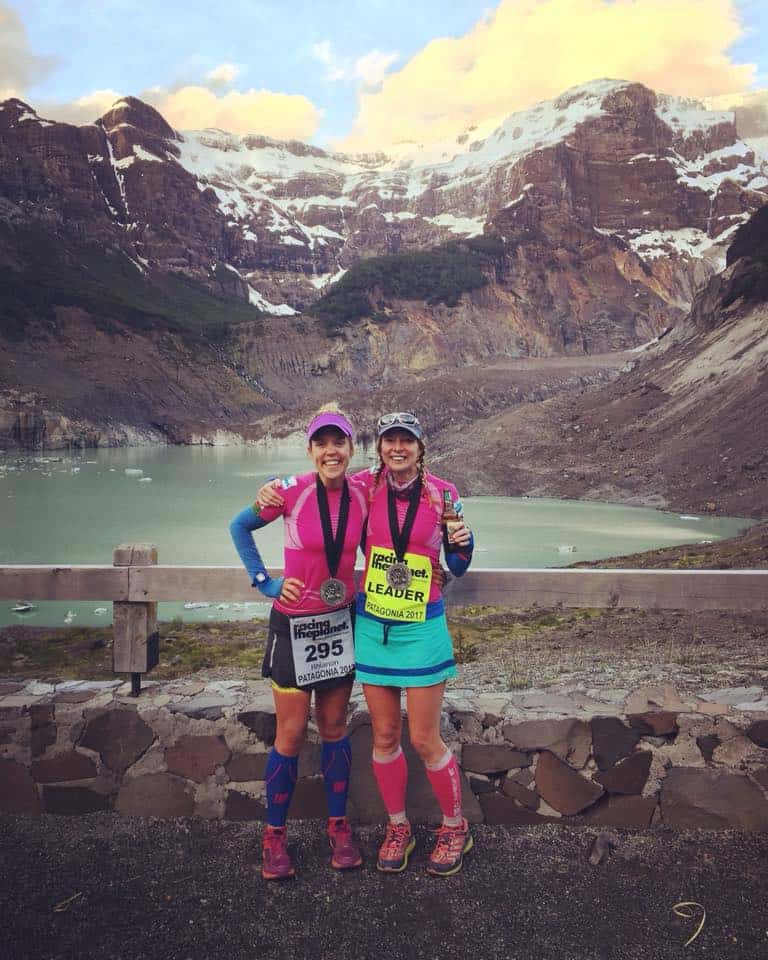 Is it hard to find time to train sufficiently for stage races?

The hardest thing for me for stage races is not the time you need to train for a stage race, but training with your pack. Your runs are slower, the pack affects your running form, and at the end of the day, it’s not natural to be running with a 7+kg load on your back! Because I have quite a strong endurance background, I already have that as my base, and then will just train with the pack for about 6 weeks before the race. I find 6 weeks is the optimum length of time for me to get used to running with the full pack, yet it’s not too long that it puts too much stress on my body. I think there’s a misconception that you need to run really high mileage in training for a stage race. I tend to peak at around 70-80 miles a week and it’s more about the quality of those miles, rather than just churning out lots and lots of long, slow miles.

Don’t sacrifice on sleep and calories. So, invest in a good quality sleeping bag that withstands temperatures colder than you’re likely to get.   And don’t even think about saving weight on a sleeping mat – every race I’ve done I see someone try this and it always ends in tears (and sleepless night sleeps!). Similarly, with calories, races will stipulate the minimum amount of calories you need, but find out how many you need to race well every day. You’re going to be in a calorie deficit, but it’s making sure you don’t cross that line and it impacts your performance, so whatever you do make sure you have enough calories.

Any ‘secret sauce’ tips/quirky things you do to help you during stage races?

Sleep! Never underestimate the ‘power’ of sleep. I’m always in my sleeping bag for 7 pm in multi-day races and normally sleep through to 5 am. I know that if I have enough sleep then I can get up and run well every day. 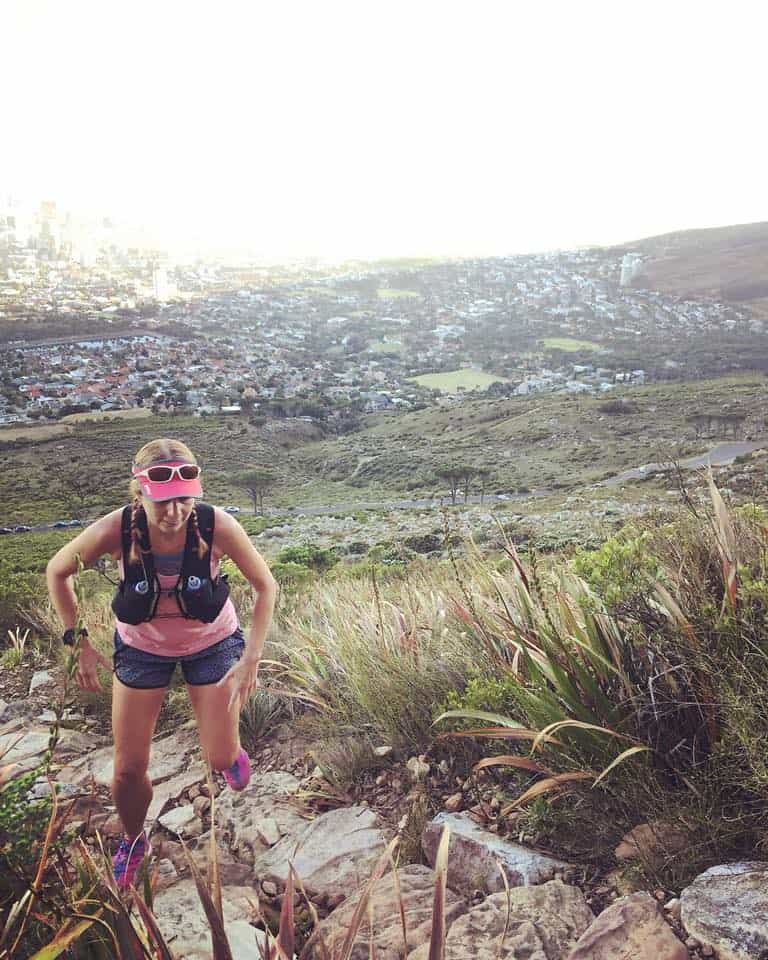 For more of her personal running blog, visit shetravelssheruns.wordpress.com For Sarah’s running coaching and Pilates teaching, check out www.pilatesandrunningwithsarah.com