26.2 miles of rhinos, velociraptors, carnival music and high fives – the London marathon is one of the most surreal and wonderful road races to experience in the UK.  Coming back from a dislocated knee, Megan Davies shares her experiences from her comeback run . . .

Run this race if: You are chasing atmosphere rather than times – a perfect first marathon. 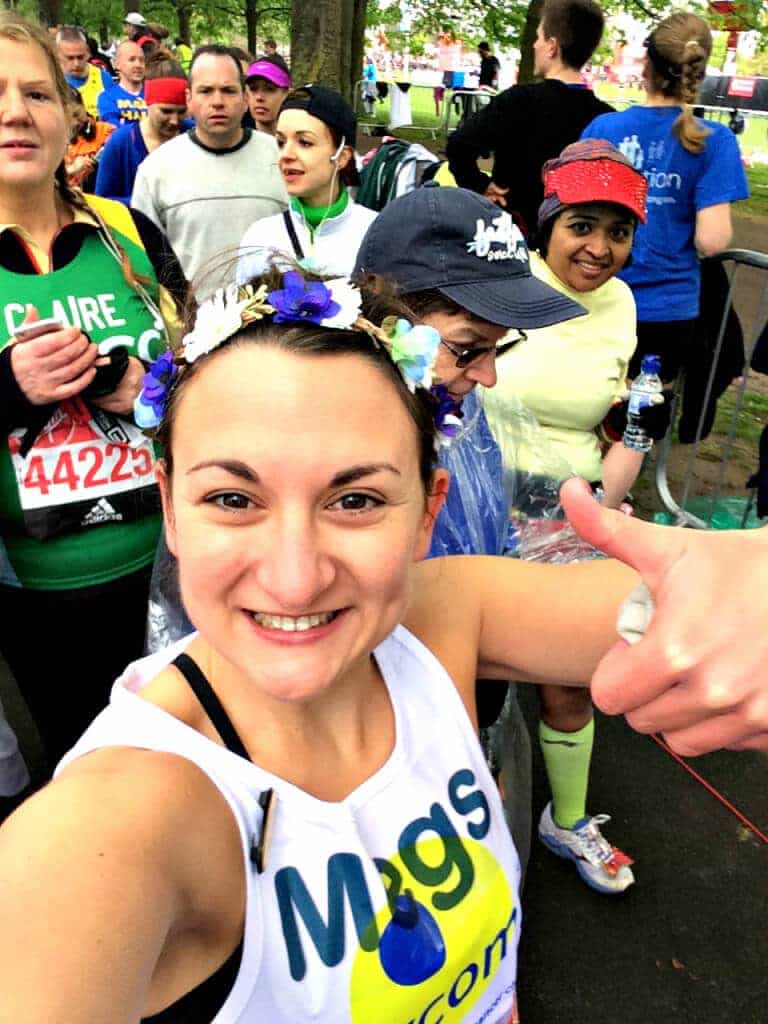 When I accepted my charity place in the London marathon, I was waiting on a knee operation following a nasty dislocation back in June. I knew that it would be a long shot, and that the likelihood of me being able to run much of it was slim after so many months off running, but London was my first ever marathon in 2013, so it seemed fitting for it to be my first marathon back after surgery three years on. I ran London to raise money and awareness for Sarcoma UK. If I had to crawl across the finish line it would be worth it to support such a worthy cause.

The training this time round was pretty different to the last time. I wasn’t able to run again following the op until December – I ran my first 5k on Christmas Day. I had to focus a lot more on strengthening my legs, having lost a lot of muscle in my left quad during my time on crutches  I was unable to do the long runs everyone else was posting about on social media. It was hard to block out what everyone else was doing, but I needed to focus on recovery before I could look to train.

When I lined up in the pens at the start line of the London marathon, I had one full long run under my belt. I was so pleased to be there, massively excited and ridiculously scared. I remember while I was still on crutches someone asked me ‘are you scared to run again now’ and I thought that was the most ridiculous question. I was longing to run again, but when it came to it I was terrified. I bottled out of the first run I tried to do because all I could remember was pain – It took a friend to get me through my first mile.

That fear took hold any time I thought about increasing distance, because every new, longer distance became the unknown again and the possibility of that pain. The marathon was about 10 miles into the unknown for me, and for so many people surrounding me waiting to see if their legs would carry them round the sights of London on a cold and sunny UK morning. The most incredible thing about the London marathon (and any race I’ve done) is the people. That morning, and as I looked around at the hundreds of charity vests and costumes, at the faces that were there waiting to achieve something incredible to raise money for causes so much bigger than them, the fear went away and the true spirit of the day kicked in. 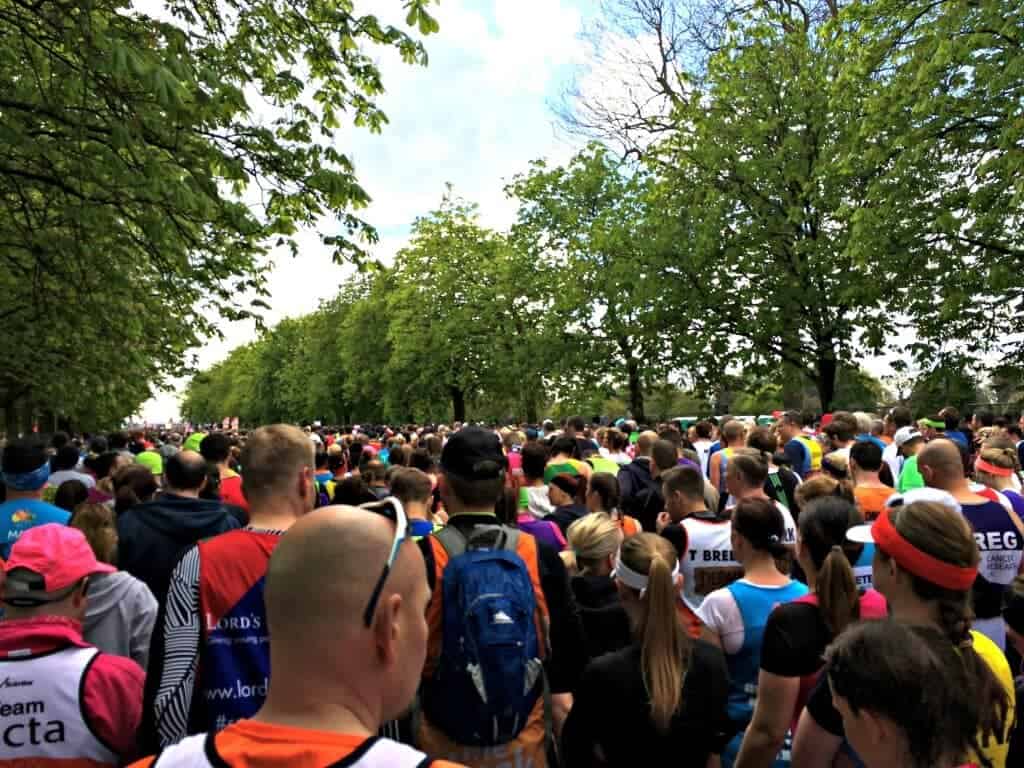 It takes about 20 minutes to cross the starting line of the London marathon, but from the moment you do there are people there cheering – and those are the smallest crowds you’ll see all day. From then, the atmosphere explodes, there is music, cheering, dancing and just the most incredible support all the way round. You won’t know whether to run, dance or laugh for most of the first half, or to try to do all three at the same time.

I ran the first half of the day with a girl called Michelle, we got chatting at the start line after we noticed our matching charity vests and stuck together. We kept a good pace and the miles flew by. We lost each other at around mile 14, which to be honest I expected to happen earlier with all of the weaving in and out of other runners. My quads started to cease up about half way round, which I knew would become more uncomfortable as the miles ticked on, but the crowds, costumes and music certainly keep your spirits up.

I was lucky enough to have family out supporting me, so there were various points they had planned to be that became a far more difficult version of ‘Where’s Wally’. As I got to mile 14 I called my brother so he could see what the atmosphere was like from my side of things. He’d said about calling him half way round and since I didn’t know if he was joking I thought I’d best make good on my promise. It was nice to be able to share that side of things with him and since I was still feeling good it was fun. The next time I called him was after mile 20 and I was in a less good place mentally by then. My quads had carried on ceasing up over the 7 miles before that and I knew that I needed to stretch them out so I wouldn’t risk my knee going. 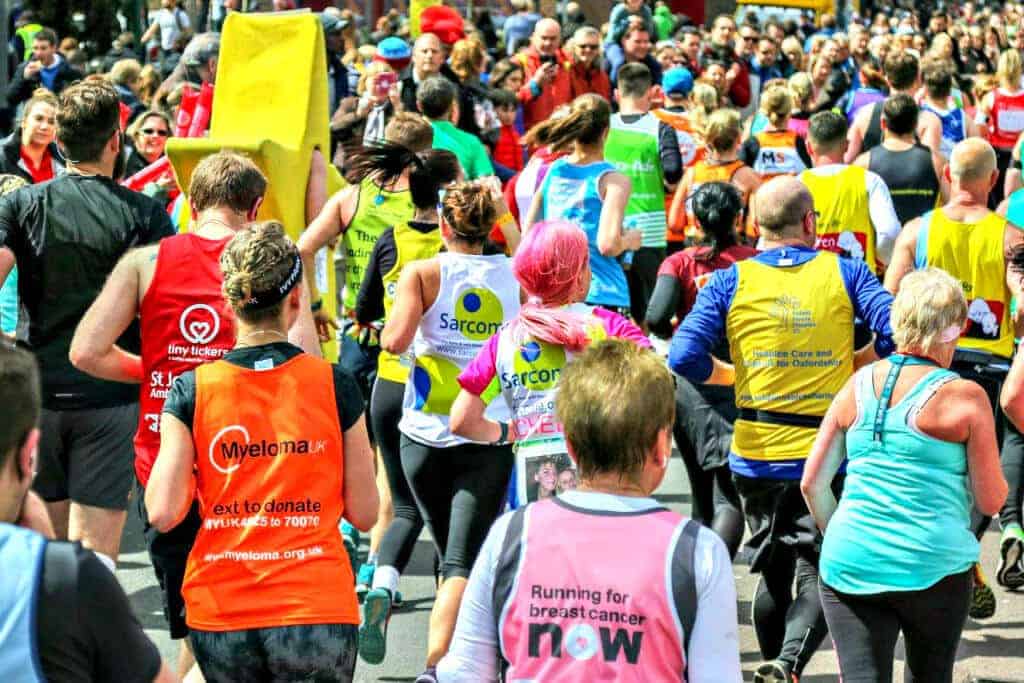 Between mile 21 and 24.5 I walked and ran in intervals, and the miles no longer felt like they were flying by. When I approached mile 23, I was so happy to know there was only 5k to go that I literally cried. It was ridiculous but so very necessary at the time. From mile 21, every mile was a reminder of what I love about running – all rolled in with the worst of it. The camaraderie of the other runners around you, all in it together. The immense support strangers in the crowd who pick out your struggling face and tell you to keep going, that you can do it, that you’re doing great. The reminder that yes, you’re struggling, but all around you are t-shirts showing you how lucky you are to be able to run when others can’t, that you are running for all of them. The full on mental battle between these positives and the part of your brain that says ‘really?! We’re doing this? Stop it now, look. It hurts, I’m tired and pizza should be now, not in 5 miles’.

I knew my charity was going to be set up at mile 25 to hurl support at all the wonderful runners taking part as part of ‘Team Sarcoma’, and I’d made the decision that I wouldn’t be walking, or crying when they saw me, so at mile 24.5 I stopped the run/walk combination and ran (kind of, in my mind it was gazelle like, but I’ve seen the photos and it wasn’t at all. It was a kind of wobbly jog) until I saw them, and I am entirely grateful for the massive cheers they gave when they spotted the Sarcoma UK logo in the crowd. At that point, knowing there was just over a mile to go, I really wanted to be at just over a mile, so I carried on my nimble hobbling and headed towards the mall. 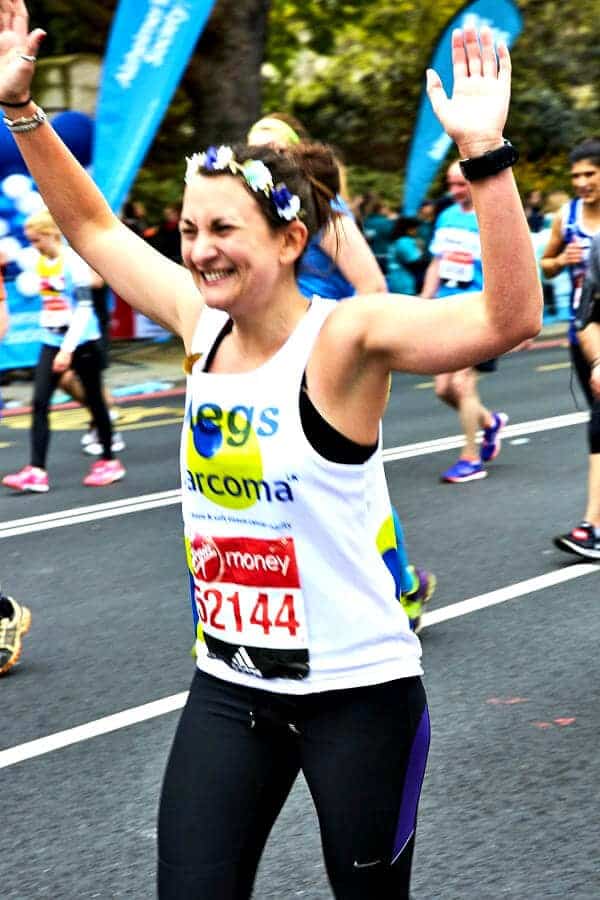 The last 800 metres of the London marathon seemed to defy logic of time and distance. I don’t know whether it was because I was still weaving through people to the very end, but it really seemed like the longest 800 metres in the history of time. I don’t think it was helped by the frequent countdown to be honest. I saw the next marker and thought ‘brilliant, what’s that 400m to go? Maybe even 200m’ then I thought a less polite thought when I saw it was still 600m. The other thing that happens at the end of the London marathon – not just to me I’ll add, is that when you see a marker that says 200m to go, your crazily tired brain goes ‘yay, sprint!!!’, and you do…until really soon into that when you remember you can’t sprint 200m on a good day, let alone after 26 miles, but you’ve started and there’s still a lot of crowds so you have to try really hard to keep it up.

As you turn the final corner into the mall and you can actually see the finish line, it becomes sort of impossible to do anything but sprint. I know a lot of people do it because they’ve seen their time is really close to what they were aiming for but to be honest I never even saw the clock as I came in, I was just so pleased to have made it round without injury so I ran as fast as my tired little legs would carry me and was pretty overcome with emotion when I got through the finish. Through that archway are even more crowds, but this time of all the other runners in the same boat as you. Some know each other, some don’t, but if you stand still for even a moment someone walks past and says ‘we did it’ to you with a huge grin on their face as they hold their medal up in a sort of cheers motion. 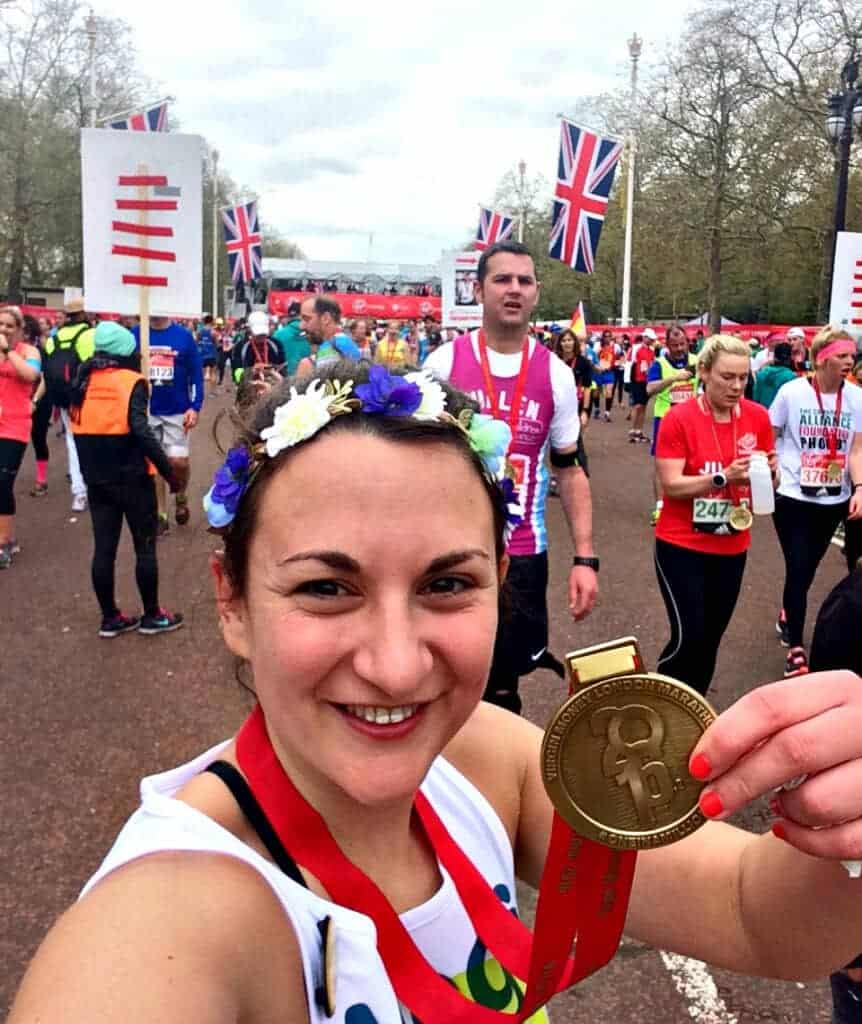 The London marathon is one of the most surreal races I have had the pleasure to take part in. I’m sure at the front there is some competitiveness, but from where I ran there were just ordinary people achieving an amazing thing. Some as a repeat and some running their first ever marathon. Unless you’re in the elite category, I would say this is a tough one to aim for a PB in. Check anyone’s GPS at the end and with all the weaving back and forth you will see that you’ve covered more than the 26.2 miles it says on the medal. The London marathon is about the atmosphere more than anything. If you hate crowds and take running very seriously but have not quite crept into the elite category then this may not be the marathon for you, as I imagine it can be quite frustrating if you are concerned with time. This is a marathon for anyone – anyone can complete this because the atmosphere does half the mental battling for you. It’s so much fun and an experience you will remember forever.

Position: Somewhere near the back I imagine . . . 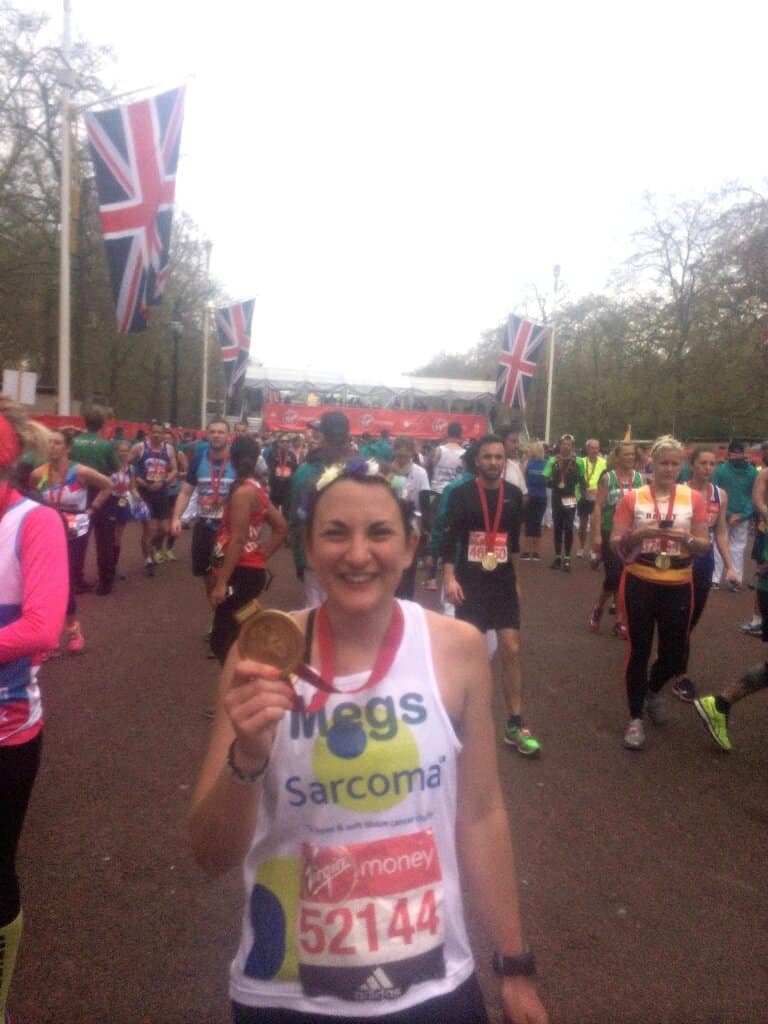