Nike’s audacious #Breaking2 campaign – attempting to run a marathon in under 2 hours – came up 25 seconds short on Saturday.  Despite not succeeding in breaking the 2hr mark, it set a new record. And Nike and it’s athletes are proving that challenging perceived limits can lead to breakthroughs.

NIKE – #Breaking2 – How it Happened

On the morning of Saturday, May 6, 2017, at a racetrack in Italy, three Nike-backed runners attempted to become the first humans to run a 26.2 mile marathon in under two hours.  One of the athletes – Eliud Kipchoge – came close at 2:00:25, but no-one broke the 2hr mark.   Despite beating the existing world record by 2.5 minutes, the attempt will not be recognised as a new world record.  But that was never the point, says Nike.  The point of their moonshot was to challenge what is perceived as possible, to push the limits, and to inspire.

Related article: Who is Eliud Kipchoge?

The #Breaking2 operation has been two years in the making.  Armies of physiologists, trainings and nutritionists have worked with Nike to work on every factor of the record-breaking attempt.

So, how did Nike plan it all, and how did it all go down?

Update: Since the Breaking2 attempt, the world record was successfully beaten in 2019.   See The Complete Story of The Sub 2 Hour Marathon. 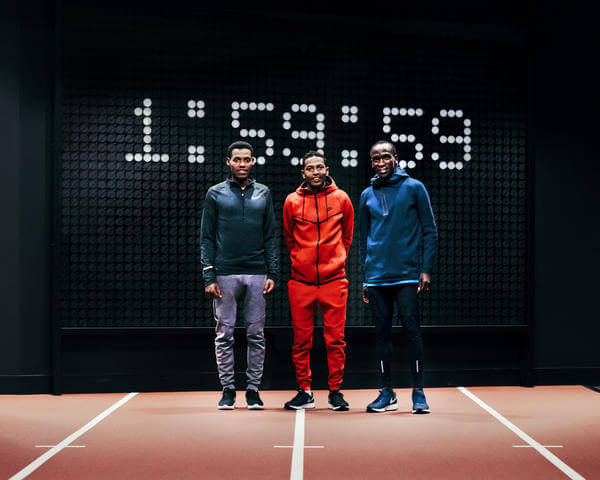 No matter if a runner had broken the 2hr record on Saturday, the medal and glory would always have been largely attributed to Nike.  Previous world records were broken by individuals – runners who had support and sponsorship from brands, but who usually competed in marathons or Olympic events.  This is significant, in that this is the first time that a brand has mounted the full campaign to break the record.

Nike’s plan to break 2hr existed before any athletes were even involved.

They have controlled and planned everything from the location of the world record attempt, to the  food, clothing and footwear of the runners.  The race day was chosen based on weather conditions.  Nike’s team of specialists analysed every variable, and exploited every angle to give the athletes their best chance of breaking 2hrs. 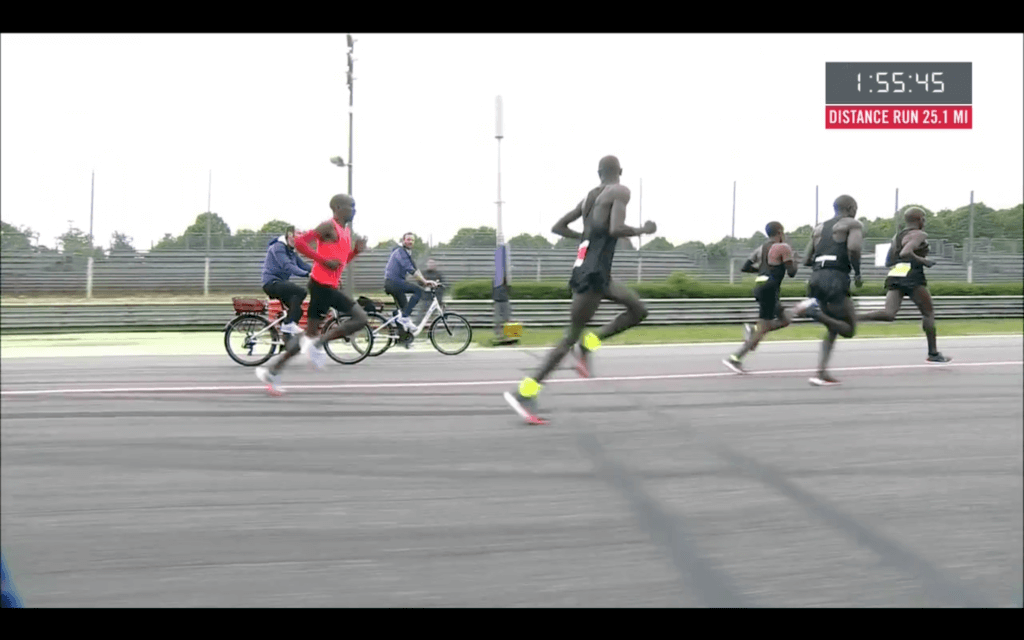 What is so significant about the fabled 2hr benchmark?

Society loves setting benchmarks, and making them into easy-to-process, rounded numbers. For example – no-one who wants to build up a nest egg  would consider setting a target of saving $97.80 per month – they’d round it up to $100.

In the marathon field, it just so happens that over the past 50 years the world record has gradually worked it’s way closer to the 2hr mark – check out the graph below.  The graph’s shape has been an exponentially decreasing one – as the runners have broken new records, the chunks they have taken out of previous records has gotten progressively smaller.

The graph  illustrates this well – to an analyst, the curve ‘tends towards zero’ – in other words, if the trend continues as it has went over the past 30 years, no runner would ever run faster than around 02:02:43.  The world record prior to Saturday was 02:02:57.

So, Nike’s attempt was an ambitious gambit at cheating the game, and slashing a massive three minutes off the old record. In the end, they still cut over two and half minutes off the record.

Bold, brave – some people called it arrogant.  Regardless, Nike’s plan was nothing if not ambitious – a message about challenging the limits of what was thought possible

So what did Nike do so differently to break the mould and attempt something that so many people thought was impossible?

When looking for potential runners, Nike started off with a long list of potential candidates, which was whittled down to a shortlist of 60 runners.  Nike’s team analysed the potential of every runner, measuring VO2 max, comparing finishing times and taking all kinds of physical tests.

In the end, Nike’s team boiled the short list down to three runners:

Eliud Kipchoge (born 5th November 1984 – aged 32 during the attempt) in a Kenyan runner. Prior to #Breaking2, Eliud had won 7 of his 8 competitive marathons. Renowned for his monastic, calm attitude, Eliud looked remarkably comfortable and relaxed while running in Breaking2 – in the end, he was the best runner on the day, coming in at 2:00:25.

The science and exploiting every factor

Nike decided to look at what would be the ideal conditions for their #Breaking2 attempt first, then find a venue.  Eventually they settled on the Monza racetrack in Italy.  The runners would do several loops of a 2.4mile track.

Some of the key conditions that made Nike settle on Monza were:

Elevation profile.  Nike wanted the flattest course possible.  Monza’s loop only has an elevation change of around 10ft, which is almost un-noticeable.

Wind.  Zero wind was essential.  Monza is in-land, meaning breezes are uncommon.  The racetrack is surrounded by trees, that also buffets any wind (and increases the oxygen content in the air).  Finally, the group of pacers were specifically arranged to break any breeze or headwinds.

Surface. The Monza racetrack is a flat, well-maintained surface.  No potential trip hazards.

Temperature and Humidity.  When the race started, it was around 15 degrees Celsius and 79% humidity.  Although this may sound relatively hot and humid to some of us, these were the optimum conditions selected for these athletes.  Nike waited until two days before the event to announce it was actually happening on that particular day, once they were confident the weather would be optimal. 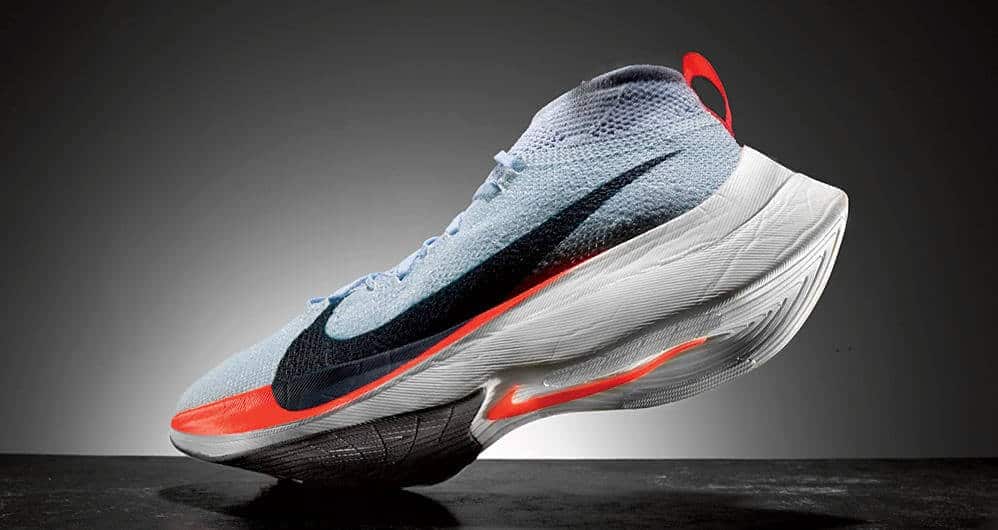 The Shoes.  All three runners ran using Nike’s Zoom Vaporfly Elite.  Just like every other inch of #Breaking2, the shoes were specifically designed for the event.  They were made of a special foam, and included a carbon fibre plate which Nike says returns 80-90% of the energy put into every step.   While critics have questioned whether the shoe’s performance-enhancing abilities make them unsuitable for a competitive event, Nike have maintained that the shoes are within regulations – and that they weren’t going for a recognised World Record attempt, anyway. 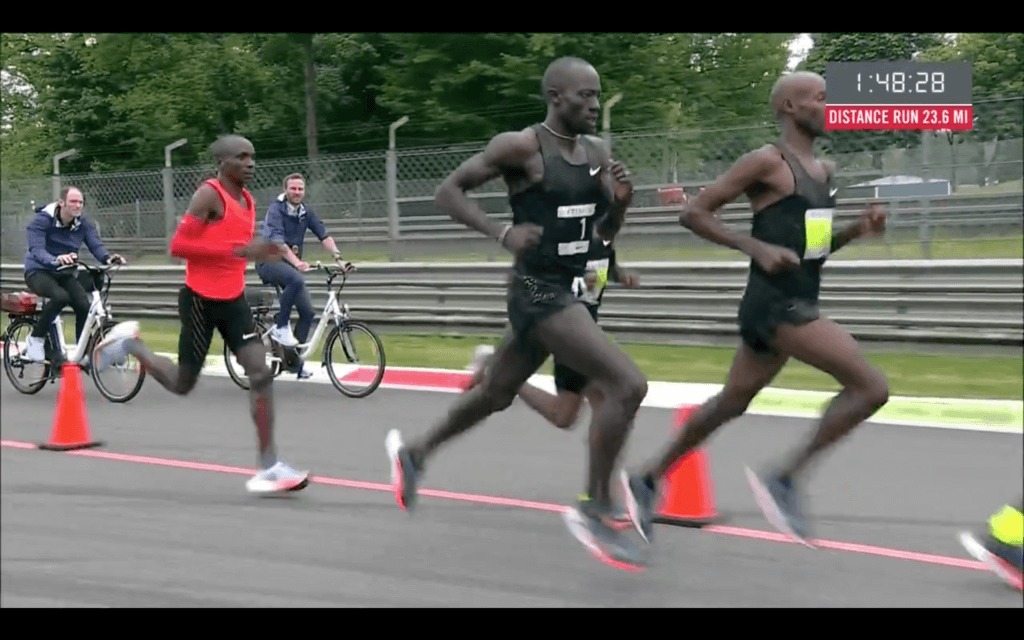 The controlled conditions of the race have made some question whether the event would make the race ineligible for any record attempts.   Nike have, quite wisely, opted not to attempt to have #Breaking2 recognised as an official world record – this would have invited all kinds of scrutiny to the event.

As I mentioned above, the Nike Zoom Vaporfly Elite shoes sit in a bit of a grey area – does their performance enhancing carbon plate fall into ‘unfair advantage’ in the eyes of official race organisers?

What’s more, Nike have remained fairly tight-lipped on the nutrition and supplement intake of the three runners.  In a world where athletes are drug-tested several times, and where old World Records are being discounted due to uncertainties about the control of performance-enhancing substances in the past, Nike are choosing to not get involved in the discussion.  A wise move, given the amount of publicity the event was already attracting. 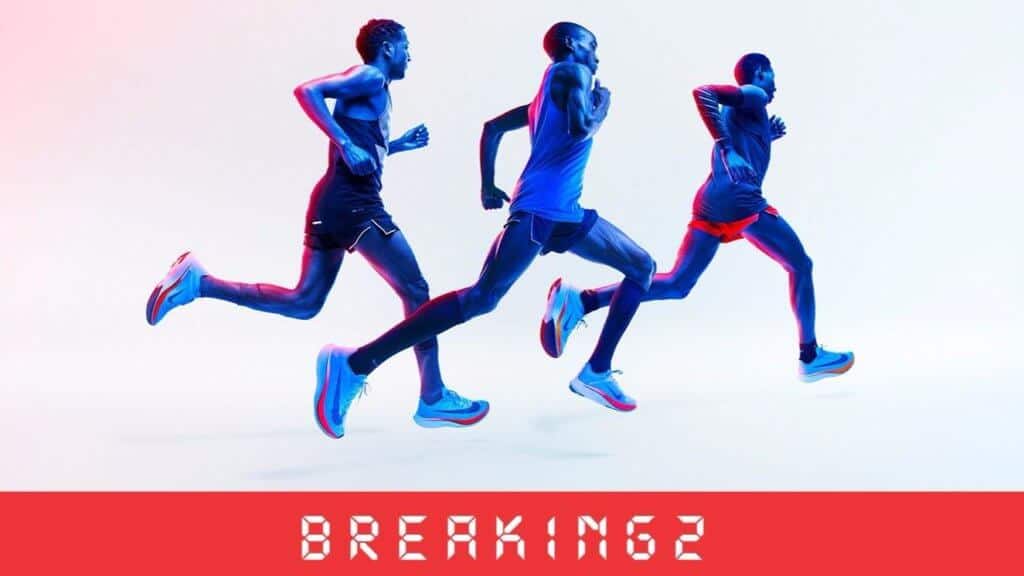 So, in the end, Kipchoge was the only one that came close to the 2hr mark. Desisi and Tadese both dropped away from the pacing group somewhere around the 1hr mark.

Nike came close, proving that the application of science and resources can take serious chunks out of world records.

25 seconds is not much, and Kipchoge looks like the best candidate in the world to make any future attempt.

NIke haven’t said much yet, but I would be surprised if we don’t see #Breaking2 return in the coming years.

They may not have done the impossible, but they’ve shown that they’re willing to take a swing at it – and have come mighty close.

Thomas Watson
M
Thomas Watson is an ultra-runner, UESCA-certified running coach, and the founder of MarathonHandbook.com. His work has been featured in Runner's World, Livestrong.com, MapMyRun, and many other running publications. He likes running interesting races and playing with his two tiny kids. More at his bio.

1 thought on “How Nike Almost Broke The Two Hour Marathon”

Join over 100,000 runners and get our top 10 fresh articles and tips straight to your inbox every Monday morning
+ a free copy of my ebook,
The 26 Golden Rules Of Running!

Marathon Handbook was founded in 2016 and is run by a team of coaches, runners, and fitness enthusiasts.

We're passionate about helping others achieve their health and fitness goals - whether running a marathon, eating better, or getting fit in the gym.

Also from the Marathon Handbook team:

Income disclosure: We are reader supported, and earn affiliate commissions when you buy via links found on marathonhandbook.com.