You’ve trained for the running part of the race, but what many runners fail to prepare for are the aid stations.

Having an aid station strategy is important, you don’t want to be fumbling about come the big day.

In this article we are going to delve into the 10 top tips for honing your optimal aid station strategy, so you can breeze through it when it counts.

What is an aid station?

When you run far, you’ve got to refuel and rehydrate as you go, or you’re in for a rough time.

On a long training run of over an hour, you’re likely to keep a stash of food and water on you during your run, be that in a hydration vest, or in your pockets.

However, come race day, no one wants to be held back (even by a few seconds) by carrying extra weight.

This is where aid stations come in.

An aid station is a stand (usually a temporary table) set up along the route of a race and is typically staffed by race volunteers.

They offer runners food, hydration, and they are stocked with a first aid kit.

Some aid stations supply just water, some water, and electrolyte drink, and others offer the full monty.

Food and drinks are laid out or handed out for the runner to grab and go as they pass through, or to stop for a chat with the volunteers.

Aid stations, depending on the length of the course, are often dotted throughout the route at regular intervals.

How frequent are aid stations?

Of course, this depends on the race, and it is important that you read through your specific race information first and foremost.

But here is a guideline of what you can expect.

In a half marathon

During a half marathon, you will find anywhere from 2 to 6 aid stations dotted along the route.

In a road marathon, there will typically be an aid station every 2 miles (or 5km). So there will be roughly 8-12 aid stations in a marathon course.

The London Marathon has 29 aid stations!

The number of aid stations in an ultramarathon varies immensely.

Many ultramarathons are ‘unsupported’ by design. This means that you have to carry all of your food and hydration with you throughout your whole run.

On the other side of the spectrum, you will fund ultramarathons with regular aid station checkpoints every 6 miles (10km).

Ready to learn how to nail the aid station?

Aid Station Tip #1: Do your research!

A key part of your aid station strategy.

Before your race, it’s a good idea to get in the know about where the aid stations are going to be dotted along the race route.

You should be sent this information in email form in good time before your race.

Otherwise, you’ll be able to find the course map and the distance between aid stations on the race website.

On race day it’s best to have no surprises.

Along with their locations, your race organizers should let you know what is going to be on offer at the aid stations.

Be that gels, sports drinks, water, or even sandwiches and cakes.

That way you’ll be able to be prepared ahead of time by trialing your specific race food during your longer training runs.

The last thing you want to do is eat something new on race day, have it not sit well, and leave you feeling uncomfortable or with stomach cramps.

You don’t want to leave your decision-making until you arrive at the aid station.

A better strategy is to decide on what you need to pick up as you see the aid station in the distance.

Take note of how you feel. Do you need to pick up a gel, some sports drink?

Check out this video of Ironman world champion Patrick Lange bossing an aid station. This is a guy who’s thought ahead.

Often at aid stations, you’ll have a bunch of volunteers handing out cups or bottles of either water or electrolyte drink for you to grab out of their hands as you run by.

Some aid stations will have both water and electrolytes on offer. So here are some tips for when it comes to grabbing the right cup:

Take heed of these cup-grabbing tips. The last thing you want is to be this guy…

These are quite tricky to drink from and often end up with runners throwing water (or sticky sports drink) all over themselves, or having to stop running to drink.

So here’s a pro tip for overcoming the paper cup issue:

If you pinch the top of the cup in the centre, so that if you look at it from birds-eye view you see a figure of 8, you’ll essentially make a little spout from which you can drink out of much more easily.

As you approach the aid station, you need to be paying attention.

That means that if you are running to music it’s a good idea to pause the track or take your headphones out when you see an aid station approach.

Often, when aid station volunteers hand out supplies, they shout out what they are offering.

Listen up, and you’ll be more efficient.

Aid Station Tip #7: Don’t stop if you don’t have to

Often in larger events like city marathons, there are just so many aid stations.

Your aid station strategy should be a balancing act between fuelling and hydrating properly, and not wasting precious race minutes by unnecessarily stopping.

By preemptively taking a look at all of the aid stations along the route, you’ll be able to determine which ones just aren’t worth stopping at.

You won’t need to chug a cup of electrolyte drink every mile.

Aid Station Tip #8: Slow is smooth, and smooth is fast

As much as you don’t want to waste time, stressing and rushing through an aid station too fast can lead you to forget vital stuff and paying for it later down the line when you’re low on sugar or water.

The best aid station strategy is all about efficiency.

You can easily get worked up and scramble and fumble around an aid station. This can be incredibly frustrating.

As you see one approaching, breath, check in with yourself (what do you need), and focus on intentional, streamlined, and efficient movements.

If your race is held over the summer months, you may get hot.

Pour water over your head.

This will also help reduce the risk of chafing if you’re a salty sweater- you’ll be able to wash some of that salt off you.

You might have seen the pro athletes do this, and there’s no reason why you shouldn’t be do it too.

And if you really want to nail it, don’t even slow down to a walk!

If possible, keep running as you pass through.

This may not be possible if you are running an ultramarathon and need to re-stock your hydration pack, but if its a road race with regular aid stations, you should be able to pick up what you need on the fly.

If you end up slowing to a walk or a standstill, your body might like it a little too much- especially in the later stages of your race.

It is psychologically beneficial to keep moving. Stopping can remind you of how tired you are, and how nice stopping for a little longer would feel.

The longer you stay stationary for, the harder it is to get back out there and running again.

So keep those muscles nice and warm and swoop in and out of the aid station.

The coolest aid station in the world

Not all aid stations are built equal. Some are just very special.

Check out this mini-documentary on Kroger’s Canteen; an aid station for the Hard Rock 100 mile ultramarathon, situated high in the Colorado mountains.

Maria Andrews is a runner, cyclist, and adventure lover. After recently finishing her Modern Languages degree and her first ultramarathon, she spends her time running around and exploring Europe’s mountains. 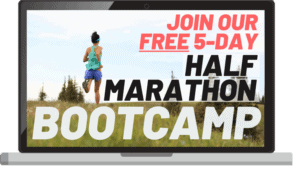 View all of our half marathon training plans