Looking for a multi-day adventure race in a far flung destination?  Here’s our pick of the best stage races in the world right now . . .

The Marathon des Sables is the forerunner in this category – and easily the most popular.  The race calls itself “an extraordinary race for extraordinary people in an extraordinary place”.  While MdS may have been the first organised stage race of it’s type to capture runner’s sense of adventure, nowadays we’re spoilt for choice.

Many runners that consider signing up for MdS aren’t even aware of the world of other stage races out there – with a huge variety in locations, climates, level of support and enjoyment, there’s a stage race for everyone out there.

So, here’s a mix of races in unique locations, with varying degrees of support to get you excited for your next trip: 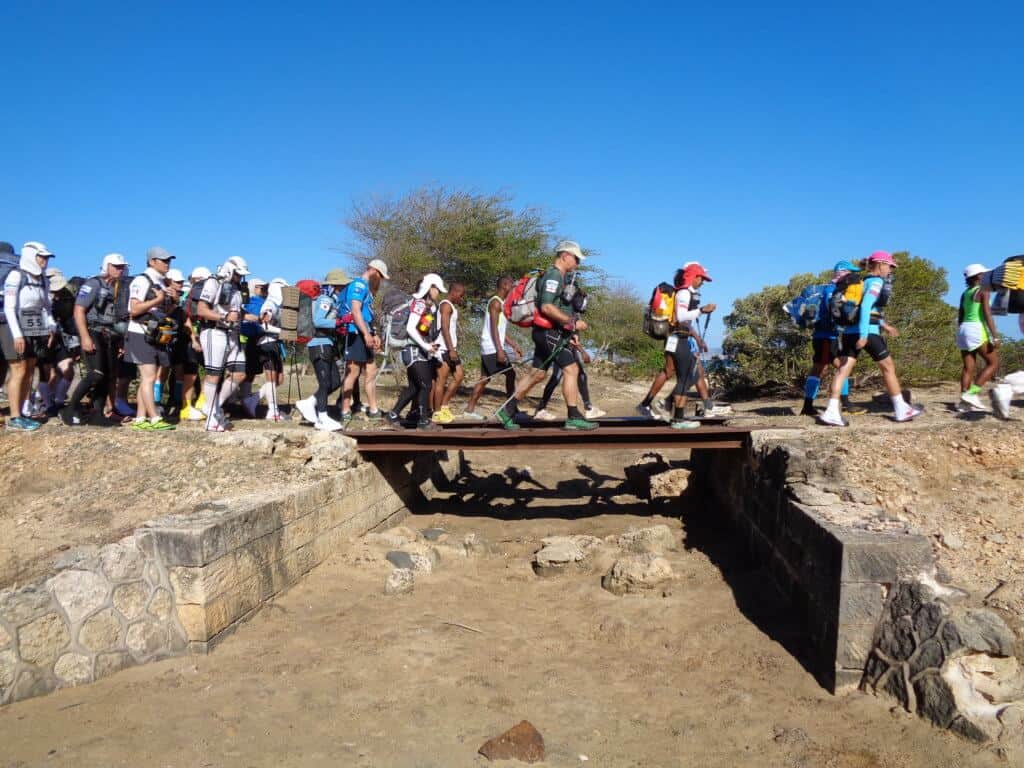 The 4 Deserts series are 250km, 6-stage self-supported races taking place around the world.  Every year they hold races in three deserts – Gobi (China / Mongolia in 2018), Atacama (Chile) and Sahara (which has been recently moved to Namibia due to political reasons, so not technically the Sahara, but who’s checking?).  Every two years they also have a stage race in Antarctica, which is only open to runners who have completed at least two of their other events.

What’s more, the team behind 4 Deserts also put on a Racing The Planet ‘Roving Race’ each year – with a different location every year.  Past host countries have included Madagascar, Iceland, Sri Lanka and Ecuador.

The 4 Deserts approach is that they want everyone to finish and will help you to do so – unless you decide to drop out, or the medical team tell you you’re finished.

Part of the appeal of the 4 Deserts series is that the field is small enough you can meet almost everybody during the race.  They also tend to have excellent support and online reporting.   A professional photographer follows the race and photos, blogs and results are uploaded every night.   You can write a daily blog (offline) and send messages to friends back home – though there is a charge for this.  There’s a high percentage of ‘first timers’ at 4 Deserts events.

If Marathon des Sables is a race about endurance, 4 Deserts races are about pure adventure.

Supported?: Sort of.  You have a 10kg drop bag which is transported from camp-to-camp, so you can easily stock up with a week’s worth of food supplies.  Aid stations have water every 10km.  Runners can buy food from local shops on the course and occasionally eat in a local restaurant.

The Global Limits races are all about having a great experience, while running through exotic countries.  The organizer, Stefan, encourages runners to interact with locals along the way.  The route in Cambodia takes runners through several stunning, off-the-beaten-track temples and villages.   In Bhutan, runners sleep in monasteries next to monks and finish their race in the famous Tiger’s Nest monastery.

The Albania race (new for 2017) should be a worthy addition to the adventure racing circuit.

Burgos Ultra Stage Race – The Way Of The Legends

Supported?: Absolutely.  The race is fully catered with a dedicated chef and kitchen crew following the runners, providing home-cooked food for breakfast, post-run and a hearty traditional dinner.  Runners stay in a variety of Spanish accommodation – from villages to albergues to some more traditional buildings, this race is a cultural and culinary tour of the Burgos region of Spain. 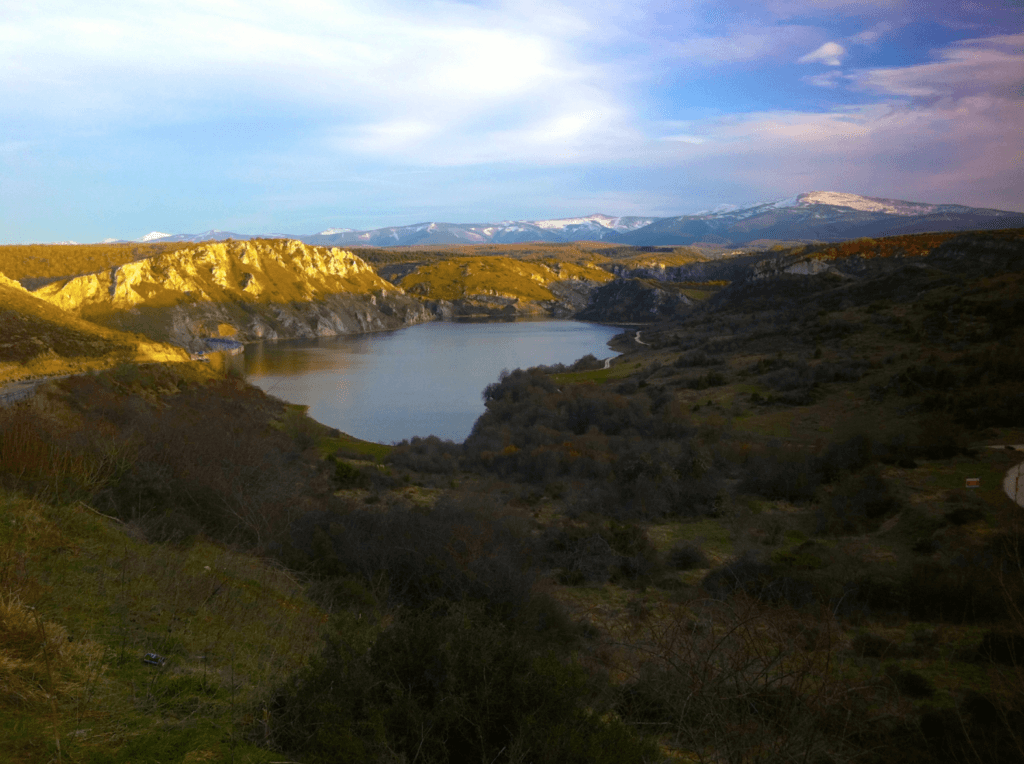 The Way Of The Legends is what you might call a boutique stage race. Runners are hosted in guest houses and hostels as they make their way around the Burgos region of Spain.  In addition to the nice accommodation, home-cooked and plentiful food is provided for every meal, along with beer and wine.  If you’re after a race which has great ‘apres-run’ conditions, this is it.  The route itself is tougher than most, with several steep climbs and long days.

Grand TO Grand (and Mauna to Mauna) 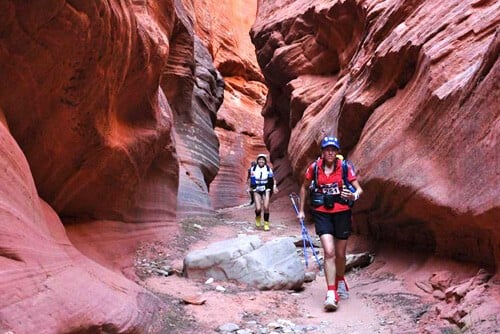 Supported?: No.  Only water and tents provided.

Number of Runners: around 170. 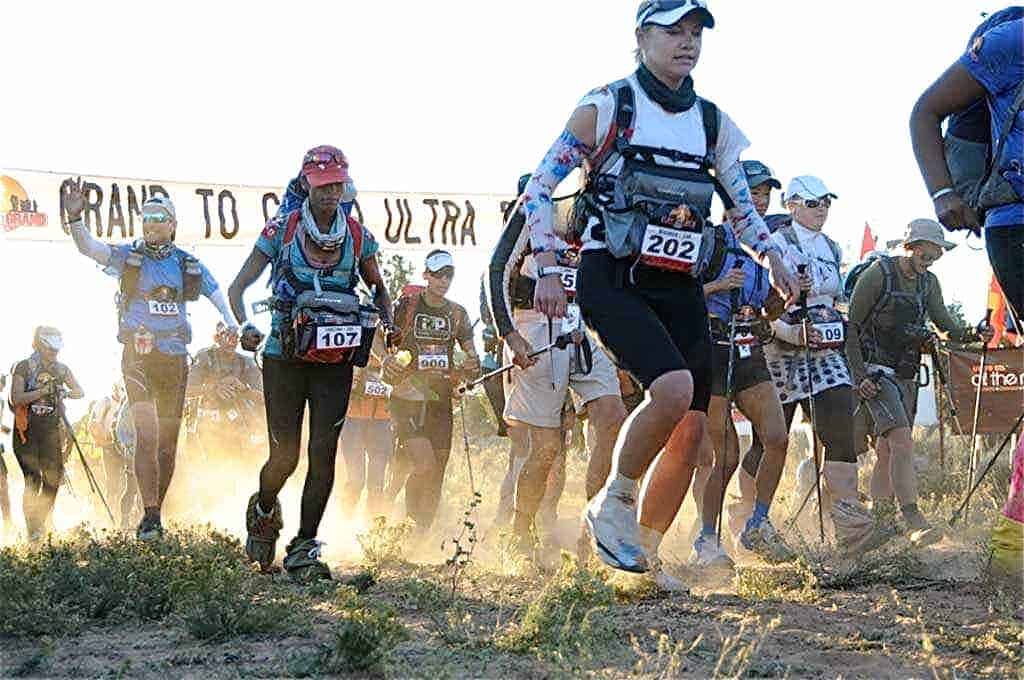 Grand 2 Grand launched itself as the first self-supported stage race in the USA, stretching across the Grand Canyon.  Expect sizzling hot days and freezing nights camped in tents under the stars.  The course is notorious on this one – lots of hills and scrambling to be done.

The new-for-2017 sister race is Mauna to Mauna, spread across Hawaii Island – it’s bound to match G2G in terms of toughness! 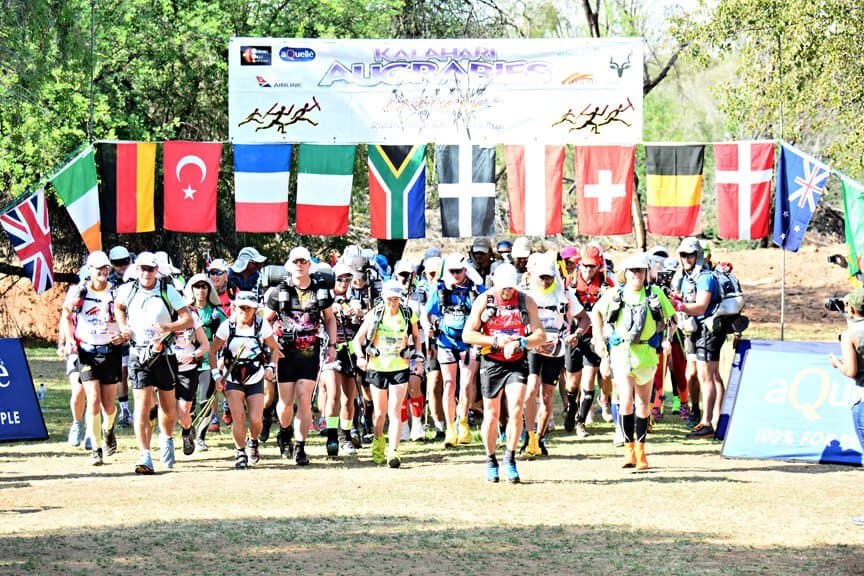 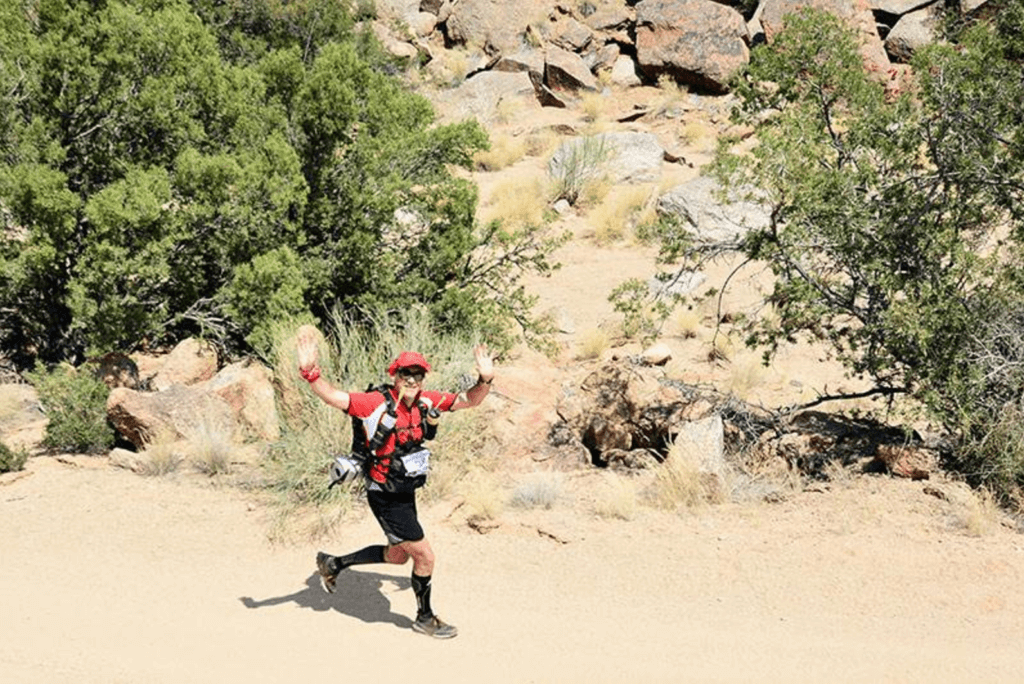 Set in South Africa’s “Green Kalahari”, KAEM has found itself with quite a devoted following and strong reputation since starting in 2000.  With modest group sizes ranging from around 40-100 runners, this challenging run (temperatures can exceed 50degC) attracts a range of adventurous types.

Beyond The Ultimate SERIES

The Beyond The Ultimate series are relatively new on the stage race scene, but have made a big impact by launching four epic races in various locations around the world.

Note: the Nepal race was cancelled following the 2014 earthquake and is yet to be re-scheduled. 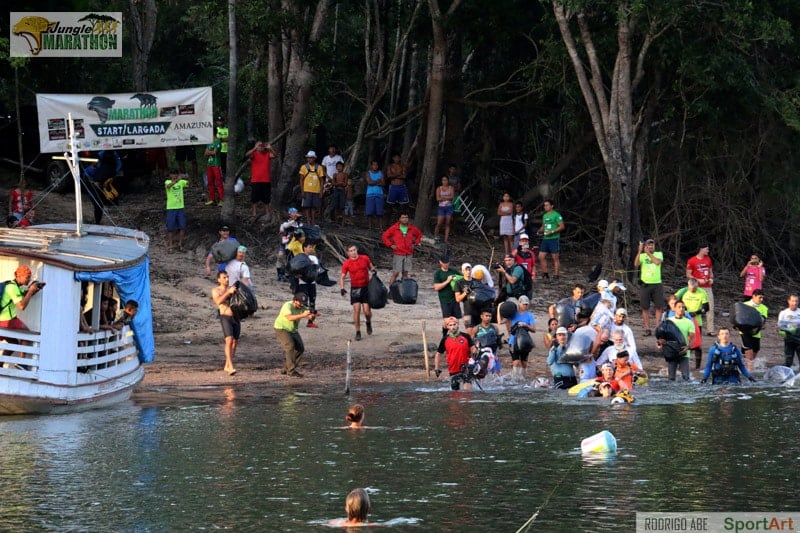 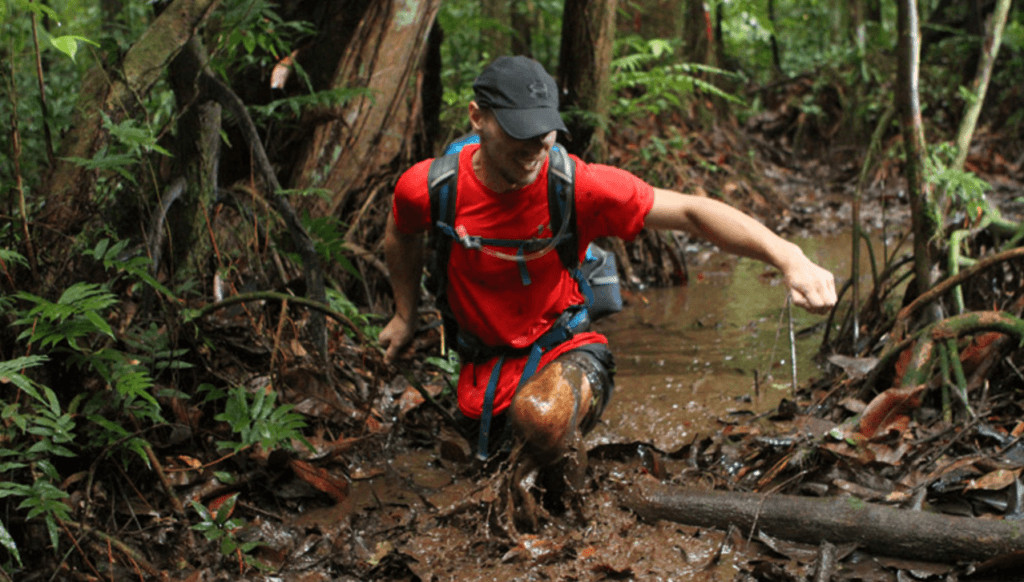 The Jungle Marathon has the reputation of being the craziest and most notorious of all the adventure races on the circuit.  If you’re looking for something totally off-the-map, this is it.

The weeks starts by flying into northern Brazil, then taking a boat up the Amazon river.   From there, runners spend the entire six stages in and out of jungles and rivers.  Be prepared for 99% humidity.  Be prepared for shoes that are wet for the entire week.  And be prepared to sleep in a hammock every night, covered by a mosquito net – because there are too many creepy-crawlies around to sleep on the rainforest floor.

Several runners have told me this is the toughest endurance event they’ve done.  You’ve traipsing through dense rainforest for the entire week, so even if you are physically able to run, often the terrain doesn’t allow it.  Instead, it’s a mentally challenging slog through one of the most remote – and beautiful – areas of the world.    Expect to see snakes, hear jaguars during the night and interact with local villages.

One for the crazies.